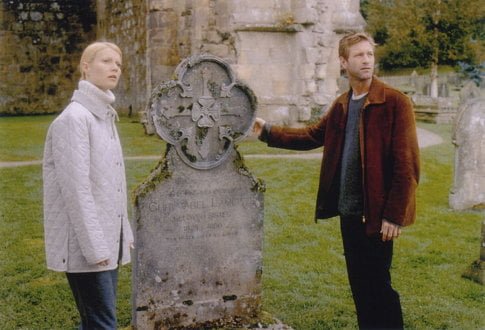 Just as an exhibition of love poems by Queen Victoria's (fictional) notoriously faithful poet laureate, Randolph Henry Ash (Jeremy Northam, "Gosford Park"), is about to open, American research assistant Roland Mitchell (Aaron Eckhart, "Erin Brockovich") finds original love letters by him to a woman not his wife. Further secret research leads him to icy English literary professor Maud Bailey (Gwyneth Paltrow) and her life's subject, ancestor poetess Christabel LaMotte (Jennifer Ehle, "Sunshine"). The initially skeptical Maud is turned around by a discovery at LaMotte's home and the two team up to solve the mystery. But unbeknownst to them, another duplicitous team want the Ash/LaMotte correspondence in their "Possession."

Adapted from A.S. Byatt's Booker Prize winning novel by director Neil LaBute ("Nurse Betty"), David Henry Hwang ("M. Butterfly") and Laura Jones ("The Portrait of a Lady"), "Possession" tries to cover too much ground too quickly. While the film is engaging, it doesn't acquire enough depth to make a lasting impression.

Roland, the American bull in an English china shop, is informed by colleague Fergus Wolfe (Toby Stephens) that Maud Baily is 'something of a ballbuster.' Maud treats Roland disdainfully when it's clear he didn't realize that Christabel had a lesbian lover, Blanche Glover (Lena Headey, "Twice Upon a Yesterday"). Something about the rough American intrigues Maud enough to allow him to stay over ('I'm a brush and flush kind of guy' he informs his hostess) and invite him to visit the ancestral home of LaMotte before his departure. This leads to another overnighter when Lord (Graham Crowden) and Lady Bailey (Anna Massey) are enchanted by the young couple. Seeing Christabel's room for the first time since childhood, Maud remembers mysterious lines from a poem that lead her to a secret stash of letters. Roland's theory is confirmed, but the mystery is deepened.

As a tentative romance is held at bay in the present, flashbacks to 1859 reveal the far more openly inflamed lovers of the past. A current literary mystery is slowly revealed as a tragically touching love affair born of equal literary intellect and passion. Layered atop all this roiling emotion is the scholarly hijinx of two teams trying to outscoop each other for fame and fortune.

The parallel love stories recall "The French Lieutenant's Woman" heightened by Ehle's strong resemblance to Meryl Streep and costuming in voluminous hooded cloaks. However, Ash's sympathies are gained too easily when we learn that his marriage is sexless while LaMotte's commitment to Blanche seems more like charity than romantic love. The present day romance is more interesting because what separates Roland and Maud - background, social standing and modern day neuroses - are more believable obstructions. LaBute has given his perennial leading man some snappy dialogue ('That's Freud - the other side of attraction is repulsion - or is that Calvin Klein?') that highlights his American otherness. LaBute is most successful, though, with his satirical look at scholarly politics. Having had a fellowship in Britain himself, the writer/director tweaks his subject matter with a knowing wink.

LaBute rushes through the mystery aspect of his story like a speeding train, with revelations coming so fast and furiously, the academics seem like dummies for not having uncovered everything sooner. Ehle and Northam are portrayed like story characters, reusing the same gazes to signify emotion, but the director gives Eckhart and Paltrow room enough to bring real emotion into their work. Director of Photography Jean Yves Escoffier ("Nurse Betty") and Production Designer Luciana Arrighi ("Howard's End") work in parallel so that scenes glide between eras with the opening of a door or a camera pan. Costume Designer Jenny Beavan ("Howard's End") contrasts Maud's cool, crisp elegance against Roland's scruffier nonchalance, while indulging in luxurious opulence for Christabel.

"Possession" weaves together two love stories, a mystery and a satire, but only two of its four strands take hold.