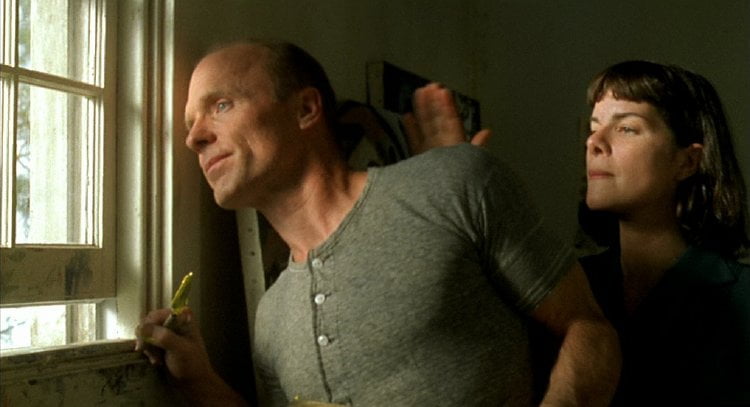 When actor Ed Harris' ("The Truman Show") father saw the book 'Jackson Pollock: An American Saga,' he initially thought he was looking at his son on the cover. The father-to-son gift inspired the actor to make his directorial debut while also starring in "Pollock."

As adapted from Steven Naifeh and Gregory White Smith's book by Barbara Turner and Susan Emshwiller, Jackson Pollock is portrayed as a simple man, an unknown artist and alcoholic leaching off his family in New York City until fellow painter and future wife Lee Krasner (Marcia Gay Harden, "Space Cowboys") took on the burden of selfless caretaker and nurturer. Krasner put her own career on hold to promote Pollock's because she believed in his genius. She had the connections he did not and was able to first get the attention of Howard Putzel (Bud Cort, in an endearing performance) who led to the all important sponsorship of Peggy Guggenheim (Harris' wife Amy Madigan, almost unrecognizable). Krasner also got Pollock away from the bottle and the city, moving out to an old Long Island farmhouse where Pollock stumbled upon the splatter technique which would become his defining style.

As his fame rose and his ego swelled, Pollock drew the city to him and alcohol regained its grip. He became abusive to the woman who saved him and began openly having affairs until Krasner left for Europe. Pollock's last affair with the much younger Ruth Klingman (Jennifer Connelly) ended in tragedy when he lost control of his car, killing himself and Ruth's friend Edith Metzger (Sally Murphy, "Fearless"). Klingman survived the crash.

While Ed Harris captures the all the surfaces of Jackson Pollock, his subject remains an enigma. Pollock speaks simplistically ('You're a damn good woman painter,' he tells Krasner on his first visit to her loft) or not at all. His eyes portray hurt and bewilderment when coming out of one of his drunken stupors, yet we never understand what drives him to paint nor what it is he's expressing in his art. (When Krasner first sees his initial splatter painting and proclaims 'You've done it Pollock. You've cracked it wide open.' My reaction was 'huh?') Pollock the man appears to get more pleasure out of rubbing his extended family's noses in his fame than in the act of creation itself. His emotional connections to the women in his life, including his mother Stella (Sada Thompson), are not explored.

Marcia Gay Harden's Krasner, on the other hand, is a complex picture of a woman whose strong beliefs drive her to action. Harden makes us understand why this woman stood beside this difficult man for so long. When she finally breaks after Pollock throws a drunken Thanksgiving dinner tantrum, our sympathy is with her. She's a muse grounded in hard-nosed reality.

Support is hit and miss with the aforementioned Cort ("Harold and Maude") appearing all too briefly and Madison's Guggenheim coming off as a bit of a circus freak. Jeffrey Tambor is Clement Greenberg, Pollock's personal critic. Val Kilmer is too attention-drawing an actor to disappear into the small role of Willem de Kooning. Jennifer Connelly, so affecting in "Requiem for a Dream," is relegated to window dressing here.

Harris as director tells his story in what sometimes comes across as disconnected snippets, although they're artfully framed snippets. He does capture the physical energy, if not the inspiration, that went into Pollock's painting. Bright, colorful cinematography by Lisa Rinzler ("Three Seasons") is particularly effective in the country locations.

When asked to comment on his art, Jackson Pollock tells a Life reporter 'It's like looking at a bed of flowers. You don't tear your hair out over what it means.' That could be said of Ed Harris' portrait of Pollock as well.