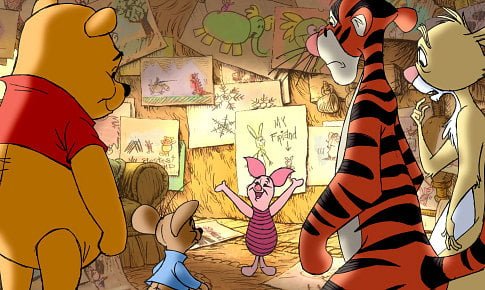 The most diminutive member of Christopher Robbin's (Tom Wheatley) family is overlooked by his friends until a search to find him gives them new-found appreciation of his stature in "Piglet's Big Movie."

This sweet little family movie has a great message for small children - that they can make a difference no matter what their size.

When Piglet (John Fiedler, the only original voice from the first Pooh movie) sees some very strange things outside his window (Eeyore (Peter Cullen) in a bee suit, Tigger (Jim Cummings) with a hive on his head), he goes out to investigate and is told that he's too small to participate in a 'very big plan' to gather honey. After the group manage to royally buzz off the bees, they realize Piglet is missing and could be in danger. Finding his scrapbook, Pooh (Cummings again) decides that Piglet's memories should know where he is and they begin to revisit the past.

This device allows the filmmakers to tell three classic Pooh tales, all in which Piglet turns out to have been a hero. His friends learn that Piglet's acts have always been big, even when theirs have often been very small (who knew Pooh was such a glory hound?).

The animation is very basic, not up to par with the last Pooh movie ("The Tigger Movie"), although it is enlivened in one sequence where the characters' crayon drawings come alive (Tigger even makes a flip book - an animation within an animation). One odd Pythonesque joke involving a fish in a tree is thrown in that adults should appreciate but may be too quick for the kiddies.

A wholly invested Carly Simon has written a half dozen songs for the latest Hundred Acre Woods adventure. "A Mother's Intuition" is a fun tune for Kanga and mothers everywhere while "With a Few Good Friends" is a real toe-tapper. The latter is reprised for the film's end credits, which are shown over a charming Simon video.

"Piglet's Big Movie" may not be a ground breaking animation, but there's no denying it's cute, especially after it gets over a somewhat sluggish start.