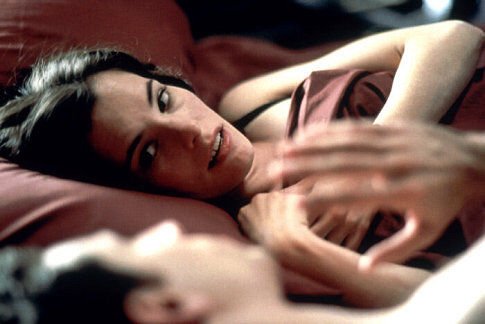 Delia (Kyra Sedgwick, "What's Cooking?") still loves her abusive husband but has to face his impact on their kids. Cookbook editor Greta (Parker Posey, "The Anniversary Party") takes the opportunity to live up to the potential her famous lawyer father demanded of her. Paula (Fairuza Balk, "Almost Famous") runs away from New York City after a freak accident and comes to terms with her troubled childhood. In writer/director Rebecca Miller's Sundance 2002 Jury Grand Prize winner, three women have all reached "Personal Velocity."

"Personal Velocity" is one of those quiet films whose impact sneaks up on you gradually. Miller, who adapted her novel for the screen, has subtly linked her three vignettes with common themes that may not be initially evident, but her heavy use of narration (by John Ventimiglia, "Series 7: The Contenders") has a negative impact on her film, making it ofttimes feel like an audio book with pictures.

In each segment, a female character is making a change in a lifestyle rooted in her relationship with her father (Miller dedicates the film to her mother). A quicksilver look of disdain from Delia results in a sudden and explosive beating from husband Kurt (David Warshofsky, "Don't Say a Word"). As Delia makes her decision to pack up her kids and leave, Miller flashes us back to Delia's childhood with hippy dad Pete (Brian Tarantina, "City by the Sea"), so laid back that he relaxes in his living room smoking pot and listening to visiting 7th Day Adventists - until one of them oversteps his bounds and is beaten. Delia develops sexual power which gains her a loving husband, until the power is reversed. After leaving him, she regains the upper hand with Mylert (Leo Fitzpatrick, "Kids"), a teenage cretin who gets his comeuppance in an amusing way.

Greta is a law school dropout married to the nurturing, nonjudgmental Lee (Tim Guinee, "John Carpenter's Vampires"), a man 'who will never leave her.' When, out of the blue, Greta's suspicious boss Mr. Gelb (Wallace Shawn, "Curse of the Jade Scorpion") tells her she's been requested to work with best selling author Thavi Matola (Joel de la Fuente, "Return to Paradise"), we begin to learn that Greta has 'a problem with fidelity' that began weeks before her wedding. Greta's new success brings out her sexual prowess, and, following in the footsteps of father Avram (Ron Leibman, "Auto Focus"), who abandoned her mother for a younger woman, Greta's new confidence makes her realize she must shed her crutch, the nice guy husband.

Pregnant and panicky, Paula picks up a young boy, Kevin (Lou Taylor Pucci), as she drives 'aimlessly' in a beeline to her mother's house in upstate New York. Mother Celia (Patti D'Arbanville, "Celebrity") listens to a strange tale burble out of her daughter, who met a Norwegian video exec who seemed to be her soul mate, only to have him snatched away in a freak accident the same evening (Delia and Greta have heard reports of this accident, another linking device to this trilogy). Paula's flight and confusion over this event mirrors her reaction to her abandonment by her father as a child. Mom's current boyfriend Peter (David Patrick Kelly, "K-PAX") is 'just like dad, only uglier,' says Paula. As Paula's NYC boyfriend Vincent (Seth Gilliam, "Courage Under Fire") tries to convince her to come home, Paula realizes Kevin, her first hitchhiker, is an abused child. Once Paula has convinced Vincent to let the young boy stay with them, she feels free to return with her unborn child.

Miller weaves strands within and without her trilogy, yet each episode has a distinct tone attributable in large part to the actress who anchors it. Kyra Sedgwick has never been better as Delia, a tough, gritty blue collar mom with fragile beauty and a steel spine. When Sedgwick breaks down sobbing, that pain is coming from a deep place. Posey's performance is more mischievous, flighty and flirty, but still weighed with regret. Balk regresses into a childishness that makes Paula a real innocent, suitable for the fear of abandonment themes of her piece.

Cinematographer Ellen Kuras ("Blow") creates images like memories, from opening shots of a child's swing set to the home movie feel of her interiors. Odd angles are used to varying degrees of effect, however, with some needlessly arty and pretentious, while those interiors also suffer from a preponderance of haze.

"Personal Velocity" is more a work of literature than cinema, with images that look like large format paperback book jackets, but the source material is thought provoking and the actresses worth watching.