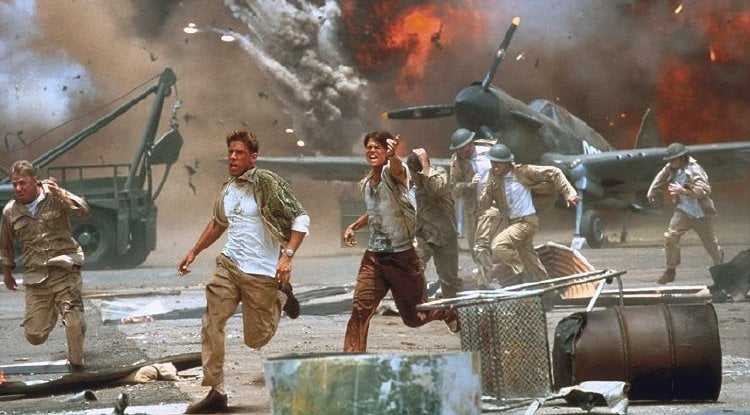 The son of a Tennessee crop duster, Rafe McCawley (Ben Affleck) taught his best friend Danny Walker (Josh Hartnett, "The Virgin Suicides") how to fly and even protected Danny from his abusive, WWI vet dad (William Fichtner). Years later, Rafe is tapped to fly with the British Eagle Squadron
while Danny is shipped off to Hawaii as is Rafe's girlfriend, Evelyn (Kate Beckinsale, "The Last Days of Disco"), an Army nurse. The threesome's paths will all cross again, though, on the date that will live in infamy, the Japanese attack on "Pearl Harbor."

Director Michael Bay, known for the pyrotechnics of "The Rock" and "Armageddon," attempts to take the James Cameron route of mixing a love story with disaster. While he delivers a magnificent, thirty-five minute special effects knockout, Randall Wallace's ("Braveheart") script
only gives us one minor character worth caring about.

The film's first half gives us the Spielbergian Tennessee boyhood that segues to New York to establish the adult love story. In a pitiful 'meet cute' moment, Rafe appeals to Evelyn to pass him on the eye exam (he's dyslexic before there was a word for it) and she does, but also keeps him in
his place with a couple of hard, nasty needle jabs (all the nurses are presented as pinup sadists). True love inexplicably ensues, but when Rafe volunteers for combat duty in England, he nobly decides not to consummate the relationship and hands over care of Evelyn to Danny.

Rafe's shot down (and we never for a minute believe he's dead) and shy Danny delivers the news to distraught Evelyn. Gradually, they connect as a couple and do consummate their relationship in a parachute hanger scene that looks like a fashion shoot. When does Rafe return? Why, on December 6th, of course! The attack on Pearl Harbor is reduced to a means for Rafe and Danny
to repair their relationship.

Wallace's script offers a few true moments. When Rafe strides onto the English air field and asks for an immediate assignment, he's given a shot up plane with a blood spattered cockpit, fresh from battle. Red (Ewen Bremner, "Trainspotting"), a pilot with a severe stutter, becomes bait for
the ladies of WWII and attached to Betty (James King, "Blow"), a sweet, seventeen year old runaway-turned-nurse. The Japanese are portrayed sympathetically with Admiral Yamamoto (Mako) making his famous anti-war statement and Zero pilots surrounded by family photos. (Disney's decision to edit the film for Japan and Germany is a politically correct front for corporate greed.)

Yet, Wallace's attempt to include the story of Dorie Miller (Cuba Gooding Jr.), the cook who became the first African American to be awarded the Silver Star, feels tacked on. Worse yet, the idea that one man (Rafe) would be in the Eagle Squadron, be one of two pilots that get airborne during the Pearl Harbor attack to shoot down six Japanese Zeroes, and then survive Doolittle's (Alec Baldwin) raid, is suspension of intelligence, not belief. The resolution of the romantic triangle is never in doubt (you can practically see the death's head looming over one of the three stars).

During the attack sequence, one of Bay's initial shots is straight out of Spielberg's "Emperor of the Sun," as young boys playing on a cliff are startled by Japanese planes flying by. We see men in the water being strafed "Saving Private Ryan" style (Bay throws in an American flag for good measure) and men sliding down the deck of the U.S.S. Arizona just like their unfortunate counterparts in "Titanic." Rafe and Danny even execute the canyon flying stunts of "Star Wars." Throw in some John Williams' music from "Midway" and we've got Bay as Spielucasron. The overall effect can't be denied, yet only one death has emotional resonance.

Ben Affleck looks the part of the WWII hero, all square-jawed determination, but there's no depth to the character. His is an artificial nobility. He's at his most believable responding to the pain of shooting himself in the eye with a champagne cork. His 'I'm not anxious to die, I'm anxious to matter' line rings hollow. Kate Beckinsale, in the film's most underwritten role, is, not surprisingly, the most shallow of the three leads, a pretty face who seemingly responds to whichever pretty face is placed in front of her.  Hartnett is the most believable of the three leads as a shy, quiet guy dealing with extraordinary circumstances.

Cuba Gooding Jr. is as good as his largely symbolic role allows and Alec Baldwin makes for a loyalty-inspiring Doolittle. The best acting comes in some of the smaller roles. Colm Feore as Admiral Kimmel looks commanding and projects frustration at the lack of intelligence he has to work with.  Jon Voight makes for a dogged and empathetic F.D.R. James King is touching
as naive nurse Betty.

In the end, "Pearl Harbor" is a bloated epic that features a U.S. wartime disaster as a special effects extravaganza.

"Pearl Harbor." We have been hearing about this event film for over a year and finally, like a plague of locusts, it has descended on theaters everywhere. Director Michael Bay has parleyed his estimated $135 million budget into a 3-hour tome that, I have to say, I could have done without.

Don't get me wrong. I knew that the draw for "Pearl Harbor" would be the much-discussed special F/X and computer graphics used to depict the Japanese sneak attack on the slumbering battleship fleet of the US Navy stationed at the Pearl. I expected that Bay and "Braveheart" scripter
Randall Wallace would shoot for an old-fashioned romantic yarn to wrap around the action that we're there to see. They do this but, unfortunately, the tale we get is bland and insipid, with little dimension given to the players in what amounts to a romantic triangle with a backdrop of war.

I'll get to the kick-ass F/X in a minute, but I really want to complain about the story and its inherent silliness. I knew things were going to be cliched and little more when, early in the film, fighter pilot Rafe McCaully (Ben Affleck) gives his beau, Evelyn (Kate Beckinsale), an origami
bird to remember him by. My immediate thought was, "An origami bird? That's stupid!" It turned out to be the kick off gesture of the contrived yarn that is to come.

The huge cast is lost in the turmoil of the telling of the story as the setup is made for the pending attack while the individual stories of the stars unfold. Cocky Rafe, on the verge of love and war in the Pacific, takes an offer by the British to join the American Eagle squadron to do battle with the Nazis in Europe. He becomes missing-in-action and his best friend, Danny (Josh Hartnet), must break the bad news to Evelyn. Danny can't help being smitten with the beautiful Evelyn, but propriety and the memory of Rafe keeps him from acting hasty. As the months pass, the two
can't help but fall in love. Then, Rafe miraculously appears on the scene and the triangular romantic angst surfaces. The lack of life given to the characters keeps this core story from ever getting off the ground.

If you are patient, though, and don't mind spending your movie-going dollars on the 35-minute long extravaganza of the attack on Pearl, you will have a visual treat, at least for a little while. From the moment that the Japanese lead pilot signals "tora, tora, tora," you are in for some of the
most action packed, violent eye-candy we have seen since the opening of "Saving Private Ryan." As a matter of fact, there is more than passing borrowing from that Spielberg film, James Cameron's "Titanic," "From Here to Eternity" and a myriad of Hollywood war movies from the 40's and 50's.
Too bad Bay garners the most mediocre of these contributing elements.

Historical accuracy has never been high on the list of things-to-do for Hollywood filmmakers and that tradition continues with "Pearl Harbor."  History mavens will be, gleefully, all over this movie like ugly on an ape.  Details like the paint jobs on the Japanese Zeroes, the types of ships anchored in the harbor, the kinds of uniforms and more will be scrutinized, closely. Erroneous details like the presence of Admiral Yamamoto aboard the attacking carriers or President Roosevelt rising out of his wheelchair unassisted will make some cringe. But, it's about what I expect from the man that brought us "Armageddon." Oh, yeah. I almost forgot that it's not just about the attack on Pearl. Once that is over, the makers tack on an extended sequence depicting Jimmy Doolittle's daring raid on Japan, a la Mervyn LeRoy's "Thirty Seconds Over Tokyo." With a few more bucks added to
the budget, Bay could have added the Korean War, too.

Special F/X and a bunch of money do not make a good movie. There has to be a story, a believable one at least, to attach everything to and that does not happen here. "Pearl Harbor" bombs.