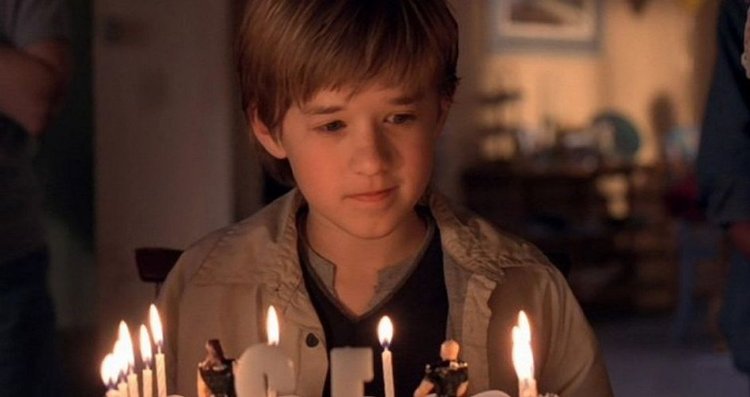 Mr. Simonet (Kevin Spacey) makes a big impression on his social studies class because of his badly burned face. His assignment, which will cover the entire school year, quickly takes their minds, and particularly the mind of Trevor (Haley Joel Osment, "The Sixth Sense"), the sensitive son of a single alcoholic mom (Helen Hunt), off his appearance. Mr. Simonet challenges his seventh grade students to change the world.

Director Mimi Leder ("Deep Impact") needed to walk a fine line to keep "Pay It Forward" from playing like schmaltz. She mostly succeeds, except for an unfortunate and cliched choice made in the film's final minutes.

Trevor take his assignment gravely and comes up with the 'pay it forward' concept - do something really big that will help one person and that person should repay the favor by doing something for three people. Trevor begins by bringing a homeless drug addict (Jim Caviezel, "The Thin Red Line") home for food, a place to stay and a shower. Mom's not thrilled when she awakens from a drunken stupor to find a stranger in her garage, but eventually comes around to Trevor's way of thinking when Jerry turns out to be a worthy cause.

Trevor's next project is his mom, who he attempts to hook up romantically with his teacher. Mr. Simonet doesn't drink and Trevor reasons that a new man will make mom strong when his shiftless alcoholic dad (Jon Bon Jovi) next comes a'calling. His final project, keeping schoolmate Adam from being beaten up by bullies, plays like a bit of an afterthought.

While these peoples' lives are unfolding in Las Vegas, a second story proceeds in reverse order, beginning in LA. Jay Mohr ("Jerry Maguire") is a reporter who is given a new Jaguar by a lawyer when his own car is totalled at a crime scene. The cynical journalist wrests the 'pay it forward' story out of his benefactor and begins to trace it back, determined to find the root.

Osment once again proves his acting ability as the seriously determined Trevor. He seems wise beyond his eleven years, yet can still cut loose and act his age. Spacey stretches as the somewhat square teacher who finds himself attracted to a woman of a far different economical and educational background. He carries himself stiffly, befitting both his emotional wariness and his physical condition. Hunt, looking leathery and overly made up, is his opposite. She's all breathy and sloppily emotional. This is a far different single-mom- of-troubled-son-with-unusual-male-suitor than she played in "As Good As It Gets," although I'm willing to bet she gets criticized for replaying that role.

Caviezel is a convincing addict, trying and failing to get straight. Mohr applies that slightly slimy quality that served him well in "Maguire." Angie Dickinson is surprisingly effective as a homeless drunk who lives in her car. Bon Jovi doesn't get a lot of screen time and is merely the stock 'wrong guy.'

I haven't read the book by Catherine Ryan Hyde so am unsure if screenwriter Leslie Dixon ("The Thomas Crown Affair") deserves the blame for the three hanky ending which doesn't serve the film well. She does work the two reverse timelines deftly and the dialogue mostly sounds natural. Hunt and Spacey have an extraordinary exchange when Arlene finally admits why Trevor's troubled - 'My friends are all drunks and so am I.' 'I believe some people refer to that as being in recovery,' responds Simonet. The two also have an awkward, actory dialogue when Simonet reveals how he was burned. These two scenes exhibit the good writing (and ideas) versus the cliched, and the actors can't quite overcome the latter.

Cinematographer Oliver Stapelton, who did beautiful work in "The Cider House Rules," is a bit more pedestrian here, although he does capture multiple faces of Las Vegas, from the glitzy strip to the unfashionable homes of its working class to the majestic mountains seen outside Simonet's classroom windows. The chiming bells score is strongly reminiscent of "American Beauty," perhaps to recall Spacey's most recent Oscar win with Academy members. The use of Jane Siberry's "Calling All Angels" at the film's finale drives home with soppy symbolism the sentimentality so deftly avoided through most of the film's running time.

Mimi Leder is heading in the right direction with her third film, although more emotional restraint (and another ending!) would have served her better. "Pay It Forward," though, is sure to be a crowd pleaser.

"Think of an idea to change our world - and put it into action" - that is the first assignment posed by Eugene Simonet (Kevin Spacey) to his new seventh grade social studies class. One young boy, Trevor McKinney (Haley Joel Osment), takes the assignment to heart and begins a cycle of good deeds that may really change the world in "Pay It Forward."

Pay it forward. What is it? If someone does you a decent turn, don't repay it, pay it forward. Do something good for three other people. Then, if they do three good turns and so on and so on. Before you know it, the world is a better place for everyone.

Trevor begins his own campaign to "pay it forward" when he befriends a homeless junkie named Jerry (James Caviezal) and brings him home, much to the chagrin and fright of Arlene McKinney (Helen Hunt), Trevor's mom. Arlene, a cocktail waitress in Las Vegas, is a single mom fighting her own demon - alcohol. She was married to an abusive drunkard (Jon Bon Jovi) who beat her regularly before she split for Vegas with Trevor.

When her son's attempt to save Jerry fails, the boy selects his teacher, the fire-scarred Mr. Simonet, as his next pay it forward target. The lonely Eugene is drawn to the troubled, pretty Arlene and the couple begins to form an emotional bond when her ex suddenly shows up - triggering one of Trevor's greatest fears. The chivalrous Eugene bows out of his budding relationship with Arlene without a word, leaving Trevor with another failed attempt to pay it forward. The boy's last effort, to help a meek kid at school stave off bullies, ends up being the one action that does, in fact, make the world a better place, even if the cost is fatally high.

Concurrent with this tale about Trevor is the search, by reporter Chris Chandler (Jay Mohr), to find the source of the idea of paying it forward. While trying to get a scoop on a hostage story, Chris's vintage Ford Mustang is wrecked by the fleeing perpetrator. A stranger who happens by hands the puzzled reporter the keys to a brand new Jaguar and leaves with just the words that he'll be in touch. When they get together later, the man tells Chris the true story of a street hood who did him a kindness, in a hospital emergency room, that helped his daughter, maybe saving her life. The gangster's word to the man, instead of accepting thanks, is to just pay the favor forward. Now, Chris is required to fulfill his own pay it forward obligation and becomes obsessed with finding the source of this remarkable philosophy. His search is the twine that binds his quest to Trevor's own story.

Director Mimi Leder takes a turn from her first, action feature entries, "The Peacemaker" and "Deep Impact," with the much more character driven material of Leslie Dixon's ("The Thomas Crown Affair" remake) original screenplay. The helmer benefits from the acting talents of the key players and is able to give some life to the preachy script. The idea of "pay it forward" is repeated so many times in the course of the film, even an extraordinarily obtuse person would get the point. The fairly economical film tries to cover too much territory as it delves into Trevor's attempts to save the world, the multiple relations of those around the boy, and the reporter's quest for the truth. It's a bit too ambitious a job and may have been better handled by a director with more experience dealing with character, rather than plot. Certainly a tighter screenplay would have befitted the efforts of the cast and crew.

The talented cast is led by two Oscar winners and one nominee, with Spacey, Hunt and Osment playing the challenged protagonists of the tale. All three show they deserve the acclaim gained in their recent efforts, though Spacey has proven his greatness as a superb character actor many times before. Made up as a burn victim of many years before, Spacey bears the heavy, uglifying makeup with dignity, showing Eugene as a complex, mostly dour character who has an inherent kindness that just wants to pop out and let him love Arlene and Trevor as his own family. When he is rejected, by his own sense of honor, your heart goes out to the man. Spacey makes you want Eugene to be happy.

Haley Joel Osment proves that he is not a one shot wonder for his perf in "The Sixth Sense" (although I am glad to say I noted the kid in the otherwise mundane 1996 Whoopi Goldberg/Gerard Depardieu comedy "Bogus"). In his portrayal of the right-minded Trevor the inherent intelligence and dedication of the boy is a significant force in the development of the story and Osment meets the need with a professionalism that belies his years.

Helen Hunt does fine as the put upon, alcoholic Arlene who doesn't see that Eugene is true salvation when her handsome, apologetic (and declared sober) ex returns. Unfortunately, Hunt developed her character as too sympathetic toward Eugene, so her sudden acceptance of the old ways doesn't play true. Especially since she doesn't consult Trevor, who is profoundly impacted by her decision. Unfortunately for Hunt, her character, Arlene, is not much different from her previous, Oscar-garnering perf in "As Good As It Gets." She's a working class, single Mom, struggling with adversity (ill kid versus alcohol) and meeting Mr. Right.

Jay Mohr does yeoman work as the smart-ass reporter digging for the story. Jim Caviezel isn't given much time as the recipient of Trevor's pay it forward, but his story gets a nice little coda of redemption when he saves a young lady from self destruction. Angie Dickinson (unrecognized to me, though not others) plays Trevor's homeless - by choice - grandmother who has a late-breaking influence on things.

Techs are solid throughout. It's not the acting or the behind-the-camera work that is the problem. Dixon's overly ambition screenplay tries to cover too much ground in the allotted time and harps on its theme of "pay it forward." I got the idea early on, so the subsequent 20 or 30 references fell on deaf ears.

"Pay It Forward" is an odd mix of good acting talent and an under-achieving script that hampers the overall effort. Leder makes the transition from action to character study with more than a few bumps, but practice will make perfect, I suppose. With the credentials of the talent involved in this effort, I would have expected more, much more.