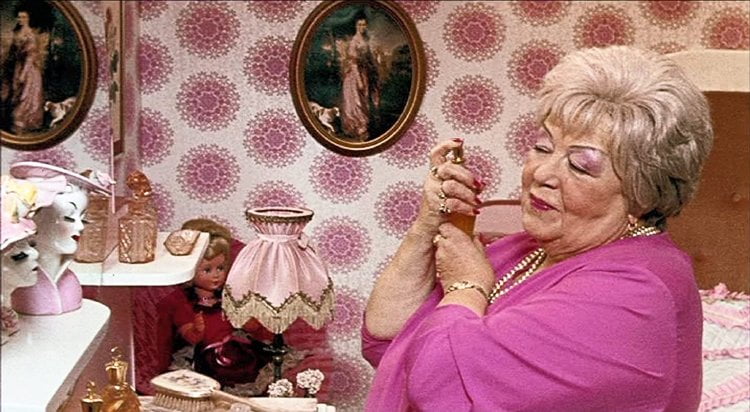 Pauline (Dora van der Groen) is 66 years old and severely retarded. She can't read, speak in complete sentences or, even, tie her own shoes. She's happy, though, living with elder sister, Martha (Julienne De Bruyn), and loves to visit the sewing shop of another sister, Paulette (Ann Petersen). When Martha suddenly dies her will stipulates that her estate will be divided between her surviving sisters as long as one of them, Paulette or Cecile (Rosemarie Bergmans), takes care of their simple-minded sister in "Pauline & Paulette."

First time helmer Lieven Debrauwer takes this simple story about a simple person and tells it - simply. There is not a great deal of action or activity taking place in this mild mannered little movie that depicts an aging Belgian family coming to grips with caring for a retarded sister. Pauline is capable of taking care of some basic things in life, like watering flowers and running errands to the local butcher shop, but her abilities pretty much stop there. When her caretaker sister Martha ups and dies, the onus of Pauline's care falls upon Paulette and Cecile.

Paulette, who owns her own small business and is a dedicated member of the local opera society, does not have the will or the patience to give Pauline the attention she needs. Cecile has a live in boyfriend, Albert (Idwig Stephane), who has zero tolerance for little Pauline and resents the intrusion she puts upon his life. Meanwhile, Pauline is only concerned about finding pictures of flowers for her precious scrapbook. (Flowers and music about flowers - Tchaikovsky's "Waltz of the Flowers" from "The Nutcracker" is prominently and frequently utilized - are used throughout the film, with a pleasantly amateur feel.)

"Pauline & Paulette" is a melancholy slice-of-life story that focuses on the simple-minded title character as she lives her life, day by day, under the protective watch of Martha. When her sister passes away, Pauline only sees it as "Martha went away in a big car." Concepts of life, death and survival are far beyond the understanding of the little retarded woman. Paulette adamantly rejects the idea that she become her sister's primary care person and soon foists Pauline on Cecile. Because of Albert's vehemence over the intrusion in his life, Pauline soon takes matters into her own hands and, surprisingly, makes the journey back to Paulette by taxi. Her resourcefulness is ignored and Paulette makes plans to institutionalize her sister. In the end, though, blood is thicker than water and things settle down and wrap up on a positive note.

This is not "Rain Main" or "What's Eating Gilbert Grape" and the film foregoes the typical tensions that Hollywood gives when dealing with retardation - the poor sot getting lost or losing some precious item and having a major breakdown over the event. Helmer Debrauwer, from his script (with Jaak Boon), doesn't contrive any such problems, simply showing Pauline's family coping with her care and well being. Dora van der Groen is quite remarkable as the simple-minded woman while the rest of the cast comes across as real people with their own agendas that do not include Pauline. In the end, you just want the harmless little old lady to be safe.

"Pauline & Paulette" is an entrant in the upcoming Boston Film Festival. This short little tome (about 78 minute runtime) is not the kind of film that will appeal to a mainstream American audience, but there is a certain charm about the film that makes it a suitable entry into the fest circuit. It has a good heart