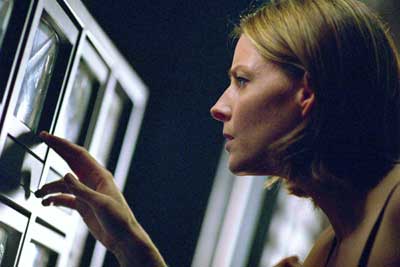 Left by her wealthy older husband for another woman, an emotionally unsteady Meg Altman (Jodie Foster) and her teenage daughter Sarah (Kristen Stewart) move into the massive brownstone of a deceased, eccentric millionaire. Besides being one of the largest pieces of real estate available in the Upper West Side, the old manse has a secret room, impenetrable from the outside. When a trio of intruders come treasure hunting, claustrophobic Meg and her diabetic daughter are forced to face the "Panic Room."

Apparently panic rooms are regaining popularity in today's uncertain times. Like an internal bomb shelter, Meg's panic room is encased in steel, stocked with emergency supplies and outfitted with security monitors (shades of Fincher's "The Game," as is the building's skylight) and a phone line external to the house.

Still reeling from her divorce, Meg tries to temper sullen Sarah's resentment, but drowns her own emotions with a bottle of red wine. She doesn't hear the three men who break into her home on the very first night she sleeps there. Up for a middle-of-the-night aspirin, she incredulously spies the intruders on her monitor and just barely manages to get Sarah from an upper floor and make it back to the panic room before they do.

The three intruders are at odds before this, however. Burnham (Forest Whitaker, "Ghost Dog: The Way of the Samurai") enters first and is aghast to find the two sleeping women. He's a security expert who builds panic rooms, hoping to make a quick score in an empty building based on information from his partner. Junior (Jared Leto, "Requiem for a Dream") is the grandson of the former owner, hoping to make off with the hidden money his family's all squabbling over. Burnham's also upset that none-too-bright Junior's brought along a third accomplice, Raoul (Dwight Yoakam, "Sling Blade"), a masked and menacing unknown.

As Koepp's screenplay pits the two women against the three men, shifting the upper hand back and forth and providing reasons for exiting the panic room, Fincher has a field day with the execution. The film begins with three-dimensional, granite architectural titles suspended before New York City buildings, not as spectacular an opening sequence as "Seven," but every bit as original. The camera (first of Darius Khondji ("Seven") who left over 'artistic differences', then of Conrad W. Hall (effects photographer, "Alien Resurrection") glides between floorboards, through stair railings and keyholes, and even performs a loop-de-loop descending a staircase. Exceptional sound work (Ren Klyce, sound designer) is most uniquely displayed in a scene where Meg leaves her haven to retrieve a cell phone, the entire sequence seeming and sounding like it was under water. Arthur Max's production design creates a privileged place, run down and murky from its years housing an elderly invalid. The exterior courtyard (seen through a vent hole from within the panic room) and fronting street are covered in the dank, rain trodden autumn leaves of Halloween.

Foster, who took over the role from an injured Nicole Kidman, gives her most assured performance since winning her second Oscar. Only the strength of her maternal protective instincts allow her to overcome sheer terror. While her creeping about in darkened space may recall Clarice's journey through the basement of Buffalo Bill, Meg is a different, if equally sharp, character. Whitaker makes Burnham's conundrum sympathetic and the character works as a bridge between the hunters and the hunted. Yoakam once again proves effective at maintaining tension through a character's hair-trigger propensity for violence, while Jared Leto offers comic relief. Also notable is Paul Schulze as a policeman who comes to investigate.

"Panic Room" is a modern day take on "Wait Until Dark," rejuvenated by a stylish technician and first rate cast.

In medieval times a castle keep was a heavily fortified, camouflaged safe room that the lord of the manor could use to hide from an invading enemy. When Meg Altman (Jodie Foster) and her daughter Sarah (Kristen Stewart) move into a big old brownstone on Manhattan they discover that they, too, have a keep of their own. But, the novelty of the room is soon replaced by its absolute necessity in helmer David Fincher's "Panic Room."

Meg is recently divorced from wealthy scientist, Stephen (Patrick Bauchau), when she and Sarah move into their new home. They soon discover the previous owner's panic room, a steel and concrete space that contains its own surveillance system, separate phone line and ventilation system. It's all a novelty, and not much more, until, in the middle of their first night, Meg finds that intruders are trying to break into their new home. Suddenly, novelty becomes need and the panic room becomes their refuge from the thieves, but what the intruders want is in that room.

Director Fincher is no slouch when it comes to drama. "Se7en," "The Game," and "Fight Club" all delve into the realm of suspense and he succeeds every time. With "Panic Room," the helmer takes the manufactured screenplay by David Koepp ("Stir of Echoes") and, with the photographic imagery of two master cinematographers, Conrad N. Hall and Darius Khondji, creates a finely crafted, though predictable drama that pushes the right buttons.

Koepp's original script is a build up of coincidences that push the story along rather than have it move under its own momentum. Angst-ridden, claustrophobic Meg and her diabetic daughter are on their own after husband/father Stephen abandoned them (leaving a very lucrative divorce settlement if the size and scope of the Manhattan brownstone is any indication). It's a sure bet that the mental and physical weaknesses of the two woman will come in to play when the bad guys begin their siege on the house to recover "something" of great value.

The three thieves - out-of-control idea man Junior (Jared Leto), security expert Burnham (Forest Whitaker) and masked loose cannon Raoul (Dwight Yoakam) - break in believing that the place will be empty for at least a week. Surprised to find the house occupied, they press on with their plans, regardless, thinking that the two frightened women will capitulate without any trouble. Boy, are they wrong. Things become a cat-and-mouse game as the desperate criminals must contend with the resourceful, protective Meg. This bit of formulaic don't-mess-with-mom makes the story one of routine suspense.

Where "Panic Room" excels is in its ability to take the predictable story and, through the artistry of production design, moody lighting and unbelievable photography, keeps you on the edge of your seat throughout. The fluidly moving camera eye seamlessly travels through the big old house and defies the laws of the lens as it passes between floors or through the handle of a coffee pot in some of the best tracking shots I have seen. The subtle use of sound helps to punctuate the tensions that build during the course of the film and, oftentimes, are used to disturbing effect. Technical quality is a serious consideration in rating any film and "Panic Room" gets high marks.

The solid cast is not called upon to do anything incredible or outstanding (although, with the talent here, this is possible). They do, however, give performances that befit their abilities. Foster does not stretch as the beleaguered mom, but she does come across as fiercely protective of her daughter, Sarah, and capable of giving to the bad guys as good as she gets. Forest Whitaker plays the voice of reason that, even though he is involved in committing a capital crime, does not want any harm done to anybody. Jared Leto is the manic comic relief as a criminal without a clue who thinks himself a mastermind. Dwight Yoakam ("Sling Blade") carries about him a sinister, brutal air as he, throughout the film, challenges Junior's authority and Burnham's non-violent creed.

"Panic Room" is a bit of an enigma - a routine, by-the-numbers suspense thriller that succeeds in rising above the writing and provides palpable tension from start to finish. The outstanding cast helps propel things along, even if none stretch their skills too far. The almost-had-it-all ending reminded me strongly of the Greek tragedy finale of Stanley Kubrick's 1956 feature, "The Killing."