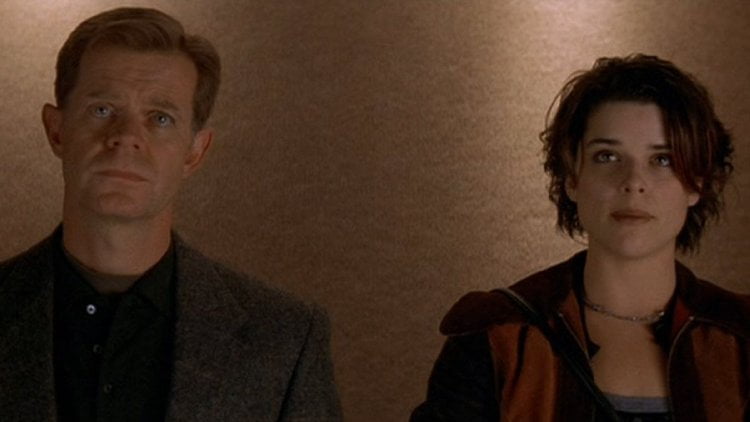 'Ever get the feeling that you're dead?' asks Alex (William H. Macy, "State and Main") at his first appointment with psychologist Dr. Parks (John Ritter, "Sling Blade"). Alex is severely depressed, probably due to the family business he's looking to get out of - contract killing. While he has an amazing relationship with his young son Sammy, (David Dorfman, "Bounce") his marriage to Martha (Tracey Ullman) is at a crossroads when he meets Sarah (Neve Campbell) in Dr. Parks' office in first time writer/director Henry Bromell's "Panic."

"Panic" is one of those heralded little films which played festivals but is having a difficult time getting theatrical release. This could be due to its 'hitman goes to shrink' theme, already covered in "The Sopranos" and "Analyze This," or it could be due to a niche quirkiness that would appeal to an audience willing to overlook its flaws.

"Panic" makes missteps, but also takes some intriguing side roads, particularly in its unique familial relationships. Alex lies in Sammy's bed every evening and has real conversations with the boy (portrayed as maybe just a bit too precocious). Alex' relationship with his own dad is another matter entirely and is summed up by a flashback of Michael showing the young Alex how to shoot a squirrel with a Walther PPK - something the boy clearly does not wish to do. Mom Diedre (Barbara Bain, TV's "Mission Impossible") acts as a sounding board to Alex' face ('Don't tell Martha - I want this kept private' she's informed by a son who confides in his mother over his wife), yet immediately informs husband Michael of Alex's shrink visits because 'I thought you ought to know.'

The romantic angle, which appears to be a focal point of the story, is left hung out to dry, however. Alex is too much the family man to leave Martha for Sarah and Sarah refuses to be his mistress. A flashback which shows how Alex met Martha is far more interesting than anything that happens with the present day flirtation.

Macy is good as a man torn between his duty to his father and to his son and really makes you feel the claustrophobic panic of his situation. Donald Sutherland, in the pivotal role of the ruthless Michael, is simply miscast. He's an actor that embodies characters which are patrician, intellectual or bohemian, but just doesn't work as a crass, ruthless breeder of hitmen. He does succeed in one scene, where he accompanies Alex's young brother on his first hit, sending the man off like a kid on a bicycle with training wheels. Barbara Bain shows steely nerve as the mom who's more loyal to her husband's interests than one would expect. Ullman is totally believable as Sammy's mom, the woman who intrigued Alex enough to court and wed her, but is now confused by their marital state. Neve Campbell isn't given much to work with to make Sarah anything but symbolic of a midlife crisis. Dorfman, directed with just a notch more restraint, could have made Sammy one of the best child portrayals of the year.

Once "Panic" lays its groundwork, it's fairly easy to predict where it's going, yet it has enough unique grace notes to make it a worthwhile curiosity. Keep an eye on filmmaker Bromwell.

Alex (William H. Macy) needs to see a shrink. He's facing a mid-life crisis, is unhappy with his marriage and worried about his son. He also wants to leave the family business. Alex is a hit man with a conscience and wants out in "Panic."

When Alex first goes to see Dr. Josh Parks (John Ritter) he meets Sarah (Neve Campbell), a pretty, severely neurotic young woman. They take an immediate liking to each other and a tentative romance begins to blossom. The reason Alex is seeing the doc in the first place is because of his deep-seated feelings of guilt over his troubled marriage and deadly career. When he meets Sarah, his problems are compounded, not improved, and Alex continues an inexorable downward spiral.

William H. Macy is one of my favorite character actors and there are few times he misses in a performance. In "Panic" he portrays the angst-ridden Alex as a truly troubled man who doesn't want to make waves for his family's murder-for-hire business but wants, desperately, out. His work problems affect his marriage, too, as he grows distant from his loyal wife, Martha (Tracey Ullman). His only solace is the time he spends with son, gaining strength from the little boy's unconditional love for his dad.

Macy's character study of Alex overshadows the rest of the players markedly. Donald Sutherland comes across not as a high powered, mob-connected businessman whose commodity is murder but as a childish creep who has no humanity - he even forces his grandson to gun down a squirrel. Tracey Ullman has the thankless wife role, while John Ritter is merely an object for the hit-man story to rest upon. Neve Campbell, as Sarah, has nowhere to take her troubled character. For the most part, she has to go one-on-one with Alex or her shrink. She doesn't get the opportunity to break out of her shell, acting only as a conscience for her would be lover. Only Barbara Bain (remember her in the "Mission: Impossible" TV series?) fares well as Alex's mother. She gets the chance to put a ruthless spin on her outwardly kindly wife and mother, Diedre, who, in fact, brooks no discontent from her son when he asks to get out of the killing business.

Newcomer writer/director Henry Bromwell joins the pantheon of mobster-shrink flicks that began with TV's "The Sopranos" and the DeNiro/Crystal movie "Analyze This." It's an interesting idea that could have used a more experienced hand at the helm. The premise of a mob member seeing a shrink about his guilt for his crimes should get some screen mileage, but it falls flat in "Panic."