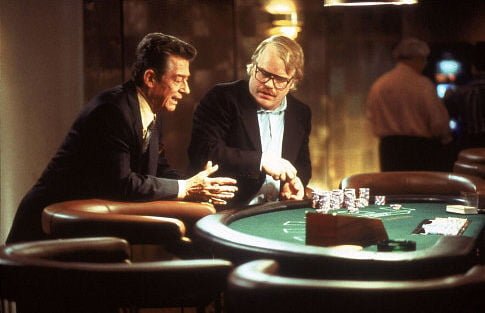 Dan Mahowny (Philip Seymour Hoffman, "Love Liza") is fast tracking. He's just been promoted to Assistant Manager at a prestigious Toronto bank, the youngest man ever to hold the position. He's admired by his clients, particularly the holder of multi-million dollar loan Miss Selkirk (Sonja Smits, "Videodrome"), trusted by his boss Bill Gooden (Roger Dunn) and adored by his girlfriend Belinda (Minnie Driver, "Beautiful") who also works at the bank. They're all about to be betrayed by Dan's secret addiction, gambling, while Dan's bookie Frank Perlin (Maury Chaykin, "The Art of War") and Atlantic City casino manager Victor Foss (John Hurt, "Love and Death on Long Island") find themselves "Owning Mahowny."

Philip Seymour Hoffman adds another great performance to his gallery of misfits and losers with quiet, internal acting that explodes with obsessive solitude. Director Richard Kwietniowski ("Love and Death on Long Island") once again spotlights a lonely man with an ardent quest traveling back and forth between locales dull and dreary to the plusher surroundings of those who breathe more elevated air.

Adapted by Maurice Chauvet from Gary Ross's book ("Stung: The Incredible Obsession of Brian Molony"), "Owning Mahowny" establishes Dan as a man with a future. He dazzles Miss Selkirk with his ability to procure her loan without the backing of her millionaire father ('It's all about procedures - you just need to know your way around them') while Belinda dreams of buying the new apartment they've just moved into. Just as he's gone up a rung in the management ladder, though, Dan begins his descent when, in hock to Frank for $10,300 and unable to place any more bets, he creates a phantom bank client and heads to Atlantic City to win back his losses. There, Victor Foss targets Dan as a new mark ('All he cares about is the next hand. He's a thoroughbred...I love him!') and paves Dan's way to hell with clearing house connections.

Hoffman, whose performance is so deftly detailed the slightest fumbling of a card relays volumes about Dan's internal state, is neatly paired with Hurt. Hurt doesn't just make Foss the obsequiously oily vice caterer he is, but goes deeper, portraying a true admiration and almost affection for Dan Mahowny, even as he bets on the man's downfall. Character actor Chaykin is amusing, making Perlin a dimwitted eccentric who oddly becomes another of Mahowny's victims. Minnie Driver can't do much with a thankless role and a bad wig. Her Belinda is the ultimate 'stand-by-your-man' type, forgiving Dan for countless disappearances and disinterest. In a tiny role, Smits makes a strong impression as a woman executive trying to establish an independent identity. She's particularly amusing reacting to the news that Dan has been stealing from her own bank loan (she bails him out). Chris Collins ("Paid in Full") is likable as Bernie, a casino waiter whose career opportunities become symbolically tied to the rise and fall of Dan's fortune. Ian Tracey ("Insomnia") is let down by director Kwietniowski, though, who never successfully integrates his tailing detective into the story.

Kwietniowski does succeed impressively, however, in creating the contrasting worlds of money that Dan Mahowny inhabits. When Dan first enters Foss's casino, we see a world class gambler (a Japanese businessman) escorted in in high style, surrounded by bodyguards and women, personally greeted by Foss. Later, when Dan's dabbling in the millions, the scene is repeated with Dan, who tries to make himself disappear amidst the rock star treatment. The second scene is staged like a boxer about to enter the ring, an apt metaphor and nod to Las Vegas. Production designer Taavo Soodor ("Narc") gives most locations a dreary, shabby look, with the exception of the bank's cool marbles and dark woods and the luxurious Atlantic City suite Foss comps to Mahowny (who is as oblivious to it as he is the women, liquor and gourmet food). Dan's new apartment is bland, his suits shabby and his car old (making it clear that he's not in this for the money). Cinematographer Oliver Curtis ("Love and Death on Long Island") tails Dan smoothly, going in for extreme closeups during high stress moments. Video monitors are trained on Dan as he gets away with white collar crime. Chauvet's dialogue sparkles ('Look, the ice man's playing 70 grand a hand!') with multiple layers of meaning.