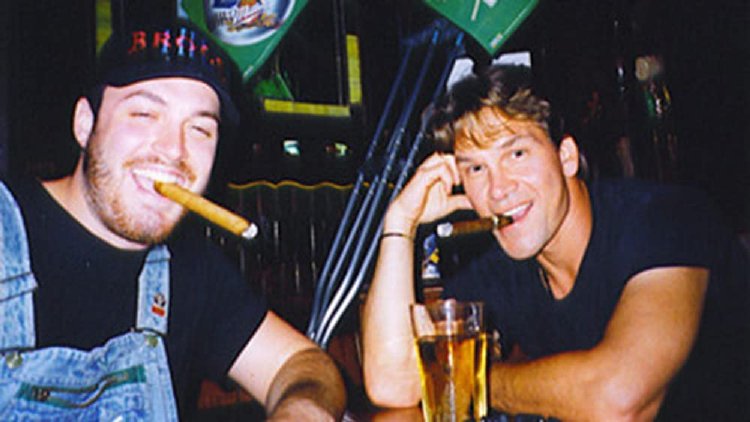 A man walks into a bar....when that man is Miramax chief Harvey Weinstein, he buys the bar. This was a negotiating ploy to sign up 25 year old tyro screenwriter Troy Duffy, whose "The Boondock Saints" was described as '"Pulp Fiction" with soul.' The deal made national news and the Boston born Duffy, whose band The Brood was included in a soundtrack deal, began envisioning himself as the first dual movie/music mogul, but his friends back home doubted that this much success could really happen "Overnight."

Tony Montana and Mark Brian Smith shot 350 hours of footage over four years, but their 82 minute film provides less insight into the business than a couple of episodes of HBO's "Project Greenlight." What the filmmakers do show is an egotist nonpareil whose initial largess towards friends and family is patently transparent to the viewer. It will come as no surprise that Troy Duffy is out for Troy Duffy, that Harvey Weinstein's enthusiasm for an unproven filmmaker may be an ephemeral prospect and that media frenzy dries up as soon as the next big thing comes along.

After Duffy's deal makes the front page of The Hollywood Reporter and local television news, J. Sloane's, a bar in the unhip part of L.A., becomes peopled with the likes of Jake Busey, Patrick Swayze, Jerry O'Connell, Jeff Goldblum, Paul Reubens and Emilio Estevez. Duffy announces that he is forming The Syndicate with 6 friends and script promoter C.B. and that, given his filmmaking responsibilities, filmmakers Smith and Montana will become co-managers of The Brood. Everyone revels nightly in frat-boy levels of excess drinking as Duffy brags about his ability to face down Hollywood bigwigs while hung over. Duffy, secure in his own identity as a happening genius, declares he'd never work with Keanu Reeves, who is 'a punk' or the 'talentless' Ethan Hawke. Back home, Troy's little brother Tyson says 'he's gonna be so big' and worries about the day when the senior Duffy may have no time left for his family, but mom, on a visit to L.A., cautions her son about his negativism towards older brother Taylor, The Brood's cofounder.

After a montage of Duffy making unsuccessful phone calls, most notably to Weinstein, we suddenly discover that "The Boondock Saints" has gone into turnaround after the hiring of Meryl Poster as Miramax co-president of production. The perennially capped and overalled Duffy opines that Poster doesn't like him because of what he apparently is - a crass, uncouth, heavy-drinking loudmouth with an over-inflated opinion of his talent. Duffy continues to work his projects, securing indie financing for his film and a contract with Atlantic records but cutting off his loyal friends and family within the bargains. Amazingly, most of them continue to play his game, but eventually the whole thing falls in like a house of cards.

Smith and Montana's film suffers, ironically, for being told from a point of view too inside the action. Events unfold without a sense of what exterior forces are shaping them and neglect to interview subjects like "Boondock Saints" stars Billy Connelly and Willem Dafoe or get Duffy family perspectives after Troy's initial success. Editing is often counterintuitive - when the one exception to the filmmaker's family followup is their fly-on-the-wall recording of a Brood band meeting called by Taylor, in which the older brother voices his distrust of the younger only to be cursed at and dismissed, they follow the scene with the band being photographed and CDs being manufactured. A chaptered montage for 'Winter 1997' shows unexplained scenes of flooding before segueing to '1998,' a meaningless interlude. Another waste of screen time is given over to Troy's long walk to the first "Boondock Saints" screening at Cannes in 1999 - the scene ends when he arrives at the door.

Perhaps the most revealing segment in "Overnight" comes near the end, when Troy Duffy speaks to a film theory class at Boston University and insults each and every student who asks him a question. Here is a man who has clearly learned no lesson and whose proclivity to horde the wealth (in this case of advice and experience) continues unabated. The filmmakers wrap with the satisfying facts of their antihero's failures (dropped by Atlantic after only 640 CDs are sold in six months; "Boondock Saints" becomes a cult item on video but William Morris neglected to include Duffy in the video rights of the deal). Still, after packing in some late in the game nuggets, Smith and Montana once again obscure the action by showing the dismantling of J. Sloane's with no perspective on the action - the bar which Duffy never owned was not the genesis of his fleeting success nor the cause of his protracted ruin.

Early on, Duffy is shown partying with fellow Bostonian Mark Wahlberg - one only wishes he'd fallen into the good graces of Damon and Affleck when the two were producing "Project Greenlight" with the cooperation of Miramax - Affleck's former partying ways and Weinstein's endorsement could have sparked a real Hollywood soap opera.