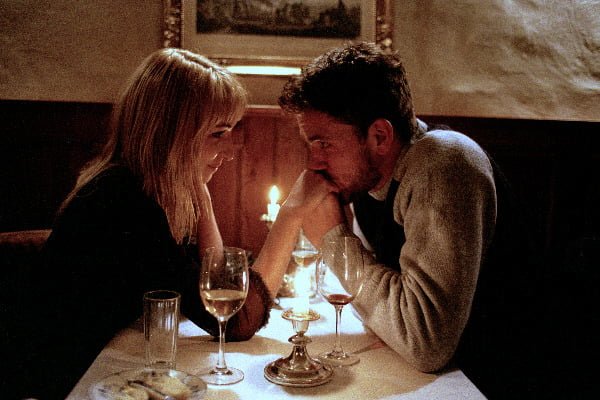 Newlyweds-to-be Cecilie (Sonja Richter) and Joachim's (Nikolaj Lie Kaas) joyous life is snuffed out when he's mowed down by a car in a freak accident. Joachim, paralyzed from the neck down, severs Cecilie from his side. She turns to Niels (Mads Mikkelsen, "Bleeder"), the doctor who, bearing the guilt of his wife Marie (Paprika Steen, "Mifune"), the vehicle's driver, came to console her as she awaited word of Joachim's condition. One accident, one split second, will reverberate through many "Open Hearts."

The Dogme '95 movement has been impossible to ignore and fascinating to watch unfold. Its most famous founder, Lars von Trier, has only dabbled in Dogme and the cinema world has wondered whether the manifesto was an elaborate joke. Yet its ambition to force filmmakers to return to a purer form of cinema, devoid of artificiality, has resulted in some fine films. Thomas Vinterberg's "The Celebration," which he has since admitted to cheating with (he used lights to shoot one scene), was a caustic family drama. Lone Scherfig was the first female director to take on the rules and produced the crowd-pleasing romantic comedy "Italian for Beginners." Now a second woman, director Susanne Bier (who cowrote with Anders Thomas Jensen), combines elements of the two to produce the best Dogme film to date.

Crosscutting, Bier establishes two loving homes filled with humor. When Cecilie expresses concern that Joachim may be hurt on a mountain climbing trip, he expresses the horror he feels every time she leaves for her chef's job with 'all those big knives.' Niels plays with his two young sons and when his 8 year old informs him 'Maybe I'm gay,' (ah, those Scandinavians!) Niels dryly replies that he can't come out of the closet until he's eleven. Niels and his wife lovingly share the exasperation that is their teenage daughter Stine (Stine Bjerregaard) with Marie consoling Niels for Stine's scathing words by telling him 'she called me an East German dyke - I was proud of her - they're studying the Cold War.'

As Joachim experiences the 7 stages of grief, Niels finds himself alternatively telling both Marie and Cecilie that the tragic turn of events are not their fault. As he finds himself falling in love with Cecilie, Niels undergoes his own guilt at the devastating effect his affair may have on his family. His young sons unwittingly take advantage of their dad's attempts to cover up his transgression while Stine stridently works to expose him.

Morten Søborg employs intimate camerawork to draw us into these people's lives with occasional grainy closeups signalling characters' soul searching. The duality of the situation is represented in image and dialogue. Both the ring of a broken engagement and a marriage are seen on two different sets of arms embracing Niels. Marie's sister-in-law comments after the accident that 'it's natural in a crisis to help others, at least for women,' when it is Niels who is attempting to comfort two women. Cecilie finds her apartment emptied of furniture by Joachim only to have it refilled by Niels, who in turn empties Marie's home of himself.

The ensemble cast brilliantly deliver complex emotions. Lie Kaas's vibrancy isn't lost with his physical confinement as the actor explodes in rage, calms in hope, then accepts his loss with heart rending grace. The youthfully beautiful Richter is confusion personified, veering between past and present, giving her heart to two men. Her performance is ying to Mikkelsen's yang as he wrestles between the love of two women. Steen portrays Marie as a sexy middle-aged woman who's life is upended as quickly and totally as the man she hit with her car. The actress must take Marie through a cycle not unlike Joachim's, albeit later in the film. Birthe Neumann ("The Celebration") beautifully plays Hanne, the patient nurse who withstands Joachim's anger and hurtful words to become his constant enduring friend while Niels Olsen plays Niels's best friend Finn as a jocular bachelor who tries to steer his buddy towards adultery but away from divorce.

Bier bookends her film with tinted street visuals to pop music, implying that the overwrought lyrics of love songs really do have relevance among the strangers who pass on city streets. "Open Hearts" is an honest and riveting portrayal of the curve balls life can throw and the mysteries of the human heart. There is nothing artificial about it.