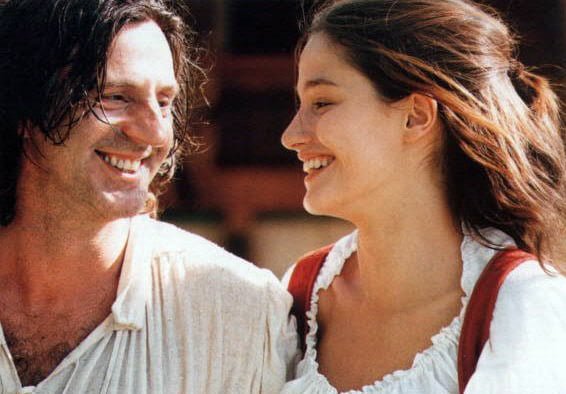 Swordsman Lagardere (Daniel Auteuil, "Sade") is hired by Count Gonzague (Fabrice Luchini, "Colonel Chabert") to kill the Duke of Nevers (Vincent Perez, "Swept From the Sea") before he produces an heir, but instead Lagardere warns the Duke and finds himself protecting the child the Duke has legitimized in Philippe de Broca's swashbuckler "On Guard!"

This French film has been made numerous times over the decades and de Broca's version has a distinctly old-fashioned flavor that serves it well. "On Guard!" is classic cinema served up with heart and humor.

The old chestnut of royal birth hidden under plebeian guise is spiced up here with filial love that begins to demand affection of a different nature. After Gonzague and his men slaughter the Nevers wedding party, the Duke and his Chevalier Lagardere fight side by side to protect Nevers' infant daughter. The Duke succumbs to a knife wound and Lagardere, believing the Duchess also dead, takes Aurore and flees to a mountain cabin. When he's found again, Lagardere and the baby are hidden by a traveling circus who fake their deaths with props. Calling on his acrobatic past, Lagardere and Aurore join the troupe and she grows into a feisty young lady believing Lagardere is her dad. He teaches her 'the Nevers attack,' a fancy fencing maneuver that's unbeatable, but highly recognizable among the cognoscenti.

Lagardere decides its time to regain Aurore's rightful inheritance and a great opportunity presents itself - Gonzague, who has a penchant for hunchbacked servants, loses his faithful Esope (Charlie Nelson, "L'Homme du Train"), so Lagardere disguises himself and applies for the opening, gaining access to the Counts' books. Just as he morphs from swordsman to hunchback though, Aurore (Marie Gillain, "Safe Conduct"), knowing the truth, wishes he'd change from father to lover.

Daniel Auteuil has proved his comic talents before, and he's delightful as the witty hunchback. A surprise on the funny front is Perez, who offers himself up as a genial ladies' man with little on his mind besides the pleasures life has to offer him. Delighted by Lagardere's swordplay, Nevers makes him his Chevalier. En route to marry Blanche (Claire Nebont, "Venus Beauty Institute"), Nevers shares a bed overnight with Lagardere and blithely enquires "Do you dabble in sodomy?" a line Perez delivers with aplomb. Both actors handle intricate action sequences with seeming ease.

Luchini works his refined, almost delicate appearance as a mask hiding a black heart while Yann Collette ("Pret a Porter") wears his ugliness on the outside as Gonzague's assassin Peyrolles. The great Philippe Noiret appears as Philippe d'Orleans. Gillain is a spirited Aurore and holds her own among this highly experienced group.

de Broca ("King of Hearts") stages the action sequences with style and paces the film well, traversing the years of Aurore's growth with a montage of circus performances and wagon travels. The mothballs on his material are mostly charming, although the aging of his actors is seriously neglected, with only Nebont showing sixteen years' passage and that only by a few gray hair streaks.

"On Guard!" is enjoyable from start to finish, a cornucopia of what makes movies fun.

Royalty, sword fights, swashed buckles, musicians, actors and hunchbacks are just a few of the elements covered in the 7th making of the French period drama-comedy "Le Bossu (The Hunchback)." In the latest remake called "On Guard!" Daniel Auteuil plays Lagardere, a sword master hired as the bodyguard for the Duc de Nevers (Vincent Perez). When the duke learns that he is a father he rushes to his lover for a whirlwind courtship and marriage, but treachery lurks in the guise of his cousin and heir, the evil Comte de Gonzague (Fabrice Luchini), and assassins are sent to dispatch Nevers, his wife and child.

When the duke is mortally wounded and believes his new wife is also dead, he places his child in the custody of Lagardere who vows to protect the new heir and exact revenge, no matter how long it takes. The swordsman, knighted chevalier by his liege lord, soon learns that the heir is a girl child, not a boy. The pair escapes Gonzague's evil clutches and seeks refuge with a traveling Italian music troupe moving from town to town across France. 16 years later the wandering artists return to Paris and Lagardere makes plans to fulfill his vows, destroy the Comte and his henchman and return the duke's wealth to his child. To do this, the chevalier impersonates a hunchback (a sign of good luck in 1700's France) and works his way into Gonzague's good graces. Of course (as if you expect otherwise) Lagardere keeps his promise to his lord.

This is a sometimes silly, frequently thrilling and often funny period story that utilizes its star's charm and ability to good stead. Auteuil is physically capable on both ends of his character's spectrum. He is graceful and quick with the sword as the chevalier and smart and ugly as the deformed le bossu. The actor has proven his dramatic skills many times and here proves his comedic mettle, too, particularly as the scampering hunchback.

Vincent Perez, known for his dramatic personae, proves to have a delightful sense of wit and gives the most likable performance I have seen from the actor. It's unfortunate that the character of Le Duc leaves the scene early on. Fabrice Luchini lacks the moustache-twirling villainy that his character should have but his main henchman, Peyrolles (Yann Colette), helps make up for the lacking. Pretty Marie Gillian, as the teenage daughter of the duke, Aurore, plays well off of Auteuil giving her perf the physicality, especially with a sword, that it needs. The great French actor Philippe Noiret gives his usually presence in the small role as Nevers royal uncle, Philippe d'Orleans.

Director and co-writer Philippe de Broca, sharing script credits with Jean Cosmos and Jerome Tonnerre (from the Paul Feval novel), does a solid job of bringing the swashbuckling adventure yarn to the screen once again. The film has the look and feel of the sword fight flicks of the 30's and 40's with its old fashioned action-adventure akin to the venerable Classic Comics, but with more humor. The story is a lightweight, frequently light-hearted and whimsical piece of period fluff that does not take itself too seriously. Instead of maintaining the pseudo father-daughter relationship of, say, Les Miserables, "On Guard!" is contrived with nonsensical ending where the aging sword master ends up romantically tied to his ward. This romance, after most of the film develops the fatherly feelings Lagardere has for Aurore, is a bit of silliness that actually detracts from the film.

The sword fighting and action sequences are fast and fun as our hero takes on hordes of bad guys single handed - and defeats them readily, despite the odds. The repeated use of the "Nevers Attack," the fighting technique developed by the duke that always end with Lagardere's opponents getting a sword blade between the eyes, is never boring and, as the film draws on, expected.

Tech credits are sound throughout the film with lenser Jean-Francois Robin capably capturing the action, from the blade work to the exciting chases sequences. Costuming, by Christian Gasc, help achieve the period feel nicely, as does the production design by Bernard Vezat.

"On Guard!" won't be placed in the pantheon of the best of the swashbucklers but it is a whole lot of fun and you get to see the one of the world's best actors, Daniel Auteuil, have a whale of a good time.