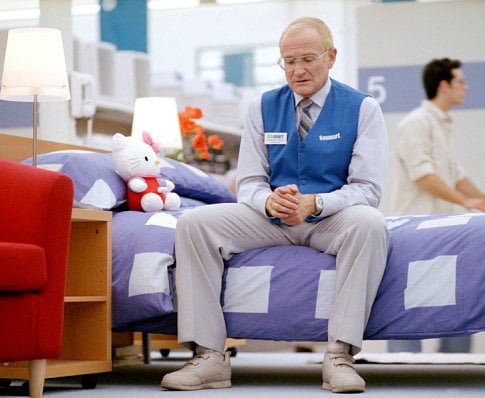 The Yorkin family has been coming to the One Hour Photo counter at the local SavMart store since before their son, Jake, was born nine years ago. For all of that time, the man in charge of the photo lab, Seymour "Sy" Parrish (Robin Williams), has personally handled their picture printing needs. What no one knows is that Sy has secretly made copies of their prints, convincing himself that the Yorkins are his family in "One Hour Photo."

Robin Williams gives a mannered and studied performance as lonely, deluded Sy Parrish. The normally comedic actor has had a string of dramatic roles with "Death to Smoochie," where he was the only good thing in that film, "Insomnia" and, now, in "One Hour Photo." In this latest, Williams plays it close to the chest, possibly too close, as the expressionless Sy, a quiet, middle-aged man without a wife or family who obsesses over his favorite customers, the Yorkins.

Sy seems innocent enough when Nina Yorkin (Connie Nielsen) and Jake (Dylan Smith) drop off their latest batch of family photos to be developed. Sy the Photo Guy (as Jake has dubbed him) is friendly, conversational and, upon the announcement that the Yorkin boy has just had a birthday, generous, giving Jake a disposable camera as a gift. As we follow Parrish home at the end of the workday, we begin to see the chinks in his staid persona when we are presented with a living room wall quite literally covered with family photos of the Yorkins. It's "uh, oh, psycho!" as Sy's deluded mind is laid bare for all to see. A downward spiral ensues and we, the viewer, are kept guessing as to the lengths that Sy will go to preserve his "family," especially after he discovers that Will Yorkin (Michael Vartan) may not be a faithful husband to Nina.

Music video helmer Mark Romanek makes his break into feature film utilizing his own script to tell Sy's story. It all begins at the end with Parrish in police custody for crimes or reasons unknown. He tells his story to Detective Van Der Zee (Eriq La Salle) as the scene dissolve to Sy in his photo lab workplace. This tale of delusion takes a conventional path as the Photo Guy slowly but inexorably reveals his troubled mind. Is he a dangerous stalker or simply a harmless delusional? Romanek presents both cases to keep us guessing on the nature of the man, but in the end there are too many distractions and fake outs.

Williams is OK as Sy the Photo Guy. He is physically adept at creating his character's gliding shuffle and expressionless demeanor - when Sy smiles, it seems a practiced rather than genuine effort. The blank cipher of the man is initially intriguing but does not change to any degree by the end. Connie Nielsen plays the loving mother well enough, but the script does not give her much opportunity to create a 3D personality. Michael Vartan is bland, at best, as the unfaithful Will. Young Dylan Smith is quite the charmer as a little boy who is the only one to recognize the lonely neediness of Sy and befriends him. Eriq La Salle is, unfortunately, not given a great deal of airtime as the actor quietly fleshes out his police investigator, Van Der Zee. Gary Cole, as Sy's boss and SavMart manager, gives an almost identical perf as he gave in the mediocre "Office Space," not a glowing recommendation.

Techs are fair with the garish fluorescent lighting of the SavMart giving much of the film a washed out look consistent with Sy's sad life. I had high hopes for "One Hour Photo" and was especially looking forward to seeing Williams in another dramatic role. The inexperienced hand of Romanek in his first feature effort shows and the film never rises above a conventional, two dimension tale. The dark nature the film tries to explore is unevenly handled with the climax driven to titillate rather than satisfy.