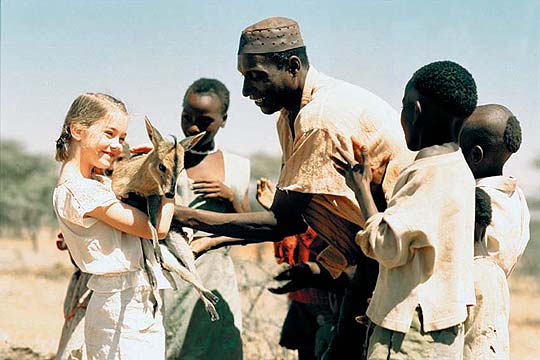 Sensing imminent doom in pre-war Germany, German Jewish lawyer Walter Redlich (Merab Ninidze, "Bride of the Wind") has left his family and homeland to take a job running a farm in Nairobi. When he's joined by his wife Jettel (Juliane Köhler, "Aimee and Jaguar") and young daughter, Regina takes to the land and their cook Owuor (Sidede Onyulo) immediately, but Jettel resists the transition and the marriage begins to falter. For twelve long years, these German Jewish refugees wait out the Holocaust "Nowhere in Africa."

Adapting Stefanie Zweig's novel for the screen, director Caroline Link ("Beyond Silence") looks at the struggles of a German family working through social and cultural clashes much like the last film which earned her a Best Foreign Language Oscar nomination, albeit on a more epic and exotic level. The Redlich family of three which is saved from the fate of its extended relatives must ironically also splinter apart before being rebuilt like the country which they return to.

As Walter is treated for malaria by fellow refugee Susskind (Matthias Habich, "Enemy at the Gates") Jettel and young Regina leave their privileged, bourgeois life. When the family is reunited, conflict immediately raises its head - spoiled Jettel has ignored Walter's entreaties to leave her Rosenthal china behind and bring a refrigerator. Even worse, she spent the last of their savings on a frivolous sequined evening dress and treats Owuor with disdain. The marriage bed grows cold with Walter accusing Jettel of letting a lawyer beneath her skirts, but not a farmer. Regina, however, delights in her new home and quickly makes friends with the local bush children and the area's wildlife.

Walter is arrested, ironically as an occupying alien, and Jettel and Regina are rounded up and interred by the British in a luxury hotel which Jettel revels in. Her conscience is stirred in speaking with the other refugees and Jettel petitions for permission for the wives to visit their jailed husbands. A British officer demands sexual favors in return and Jettel complies not too unwillingly. Walter enlists with the British once they are made to understand that German Jews do not pose an enemy threat and Jettel fights her loneliness in the company of Susskind, who admitted to only falling for women who were taken upon first meeting her, under Owuor's disapproving eye. Jettel finally experiences an epiphany after finding an old African woman left outside to die. Distraught, she attempts to have the woman moved to more comfortable surroundings only to be informed by the woman's children that this is their custom and their mother will be eased from this world by the ancestors. The unspoken connection to Jettel's own mother, learned since to have perished in a Nazi camp, gives Jettel an outlet for her grief and brings peace with Africa.

Link interweaves the marital strife with Regina's coming of age. Played by the delightful Lea Kurka in the early years and Karoline Eckertz in adolescence, Regina is a smart and resourceful girl shaped by her parents' past and her unconventional present. The Redlich's return to Germany, which Jettel, pregnant with Walter's second child, now protests, is a repeat of the film's beginnings, both a bittersweet journey into the unknown and the leaving behind of family that will never be seen again.

Ninidze imbues Walter with an aristocratic idealism. The actor expresses an acknowledgement of the sullying of his marriage, while maintaining the believability of the bond of that love. Köhler's Jettel has the strongest character arc and the actress meets it with conviction. Her performance elicits the maddening frustration of Jettel's selfishness and admiration of her courage. Eckertz brings such a natural life force to Regina that it is disappointing when the role outgrows her. Habich brings a world weariness to his macho loner that is contrasted with hopeful enthusiasm during Jettel's brief attentions. Sidede Onyulo is a calming, dignified presence not above a little comic relief at Owuor's expense.

Gernot Roll's cinematography is handsome while never over-prettifying the beautiful but harsh landscape. He uses slow motion for Regina's meeting of Owuor, shot like the beginning of a love story, which, in essence, it is. The film's most striking scene is perhaps its most symbolic, when Jettel finally wears her inappropriate dress to attend an African festival with her almost grownup daughter. As their neighbors chant and celebrate, Jettel's sequins glitter from the fire which illuminates a circle amidst inky darkness. Her acceptance of Africa and acknowledgement of her frivolous past make it easier to forgive her earlier discontent, made worse by the fate the audience knew she'd escaped but which she could not conceptualize.

With "Nowhere in Africa" Caroline Link proves that not only can she bring powerful human drama to the screen, but that she can bring her audience to experience new worlds.

Tales of Nazi intolerance and oppression throughout Europe during World War 2 have become a sort of film standard of late with such pics as "The Pianist," Amen" and "Safe Conduct." The German submission to the this year's Oscar race for best foreign language feature takes a different spin on the days of the Holocaust and deals with a Jewish family that leaves their home, and danger, in the fatherland and voluntarily put themselves "Nowhere in Africa."

Helmer Caroline Link covers often traveled territory in a quite different way with her screenplay (from Stefanie Zweig's novel) about a married Jewish couple and their young daughter who see the writing on the wall when Adolph Hitler ascends to power in Germany. Walter Redlich (Merab Ninidze) leaves his job as a successful lawyer and journeys to British-held Kenya to find work and freedom from the coming horrors of the Third Reich. His wife Jettel (Juliane Kohler) loves her family and her pampered life and doesn't really believe that anything bad will happen, even as the Nazi begin to grind the Jews under the heel of their jackboots. But, a good wife follows her husband and she prepares to trek to Africa to join Walter before evil befalls her and her daughter Regina (Karoline Eckertz). The rest of the family decides to take their chances and remain in Germany.

As Jettel makes ready for the dangerous journey Walter requests that she bring one thing that is sorely needed - a refrigerator. Instead, she uses the valuable and limited space to pack and port her treasured good china. A clash between practical Walter and homesick Jettel is inevitable as she resists her unwanted plight as a refugee. Tensions are apparent with the couple and are noted by Regina. But, the young girl is befriended by, Owuor (Sidede Onyulo), the cook at the camp where her father works, and the kindly Kenyan takes Regina under his wing and teaches her about all things African. Meanwhile, dad struggles to make a living working for the Brits and Jettel, very slowly, begins to appreciate the beauty of her adopted home.

When Britain declares war on Germany, Walter is immediately interned as a German national by the British. Jettel and Regina soon follow but are housed in a commandeered luxury hotel and treated with the very best. Walter seeks the help of the local Jewish community leaders and gets released but has no job. Jettel, unknown to her husband, accepts the help of a handsome British Army officer in finding Walter a post - for a price she is quite willing to pay. Her deal is "finalized" but she doesn't realize the binding of the intimate contract takes place in view of Regina. Life goes on for the Redlich family and things leap ahead several years with teenaged Regina (Lea Kurka) coming back home from school for her vacation.

Things have changed for the Redlichs as dad seeks to join the British Army and do his bit against the Nazis. Jettel has finally become enamored with her adopted country and has gone native, now speaking Swahili fluently - quite the departure from her arrival where she insisted that Owuor learn German. When the war finally ends the anti-Nazi government in Germany asks Walter to return and help rebuild the country and promises him a judgeship. But, Jettel has turned 180 degrees from when she first came to Kenya and feels that Africa is now her home, not Germany.

There is an interesting arc to "Nowhere in Africa" as it tells the story of one tiny family against the backdrop of world events. As the Redlichs struggle to survive in the strange new land the plight of the family back home comes by way of the mail and we hear how things are steadily going from bad to worse until, finally, word of their deportation to Poland arrives with all its portent. Life must go on for the survivors who made the choice to leave Germany 9 years before.

Juliane Kohler, as Jettel, has the most significant character development as she goes from the pampered daughter of a prosperous Jewish family to being a stranger in a strange land, then becoming one with that land. Her story comes full circle as she returns to her native land, once again, because a good wife follows her husband, but she is a very different person by the end of "Nowhere in Africa."

Walter, as played by Merab Ninidze, doesn't change much from beginning to end and is more a symbol of survival and adaptation. Younger Regina, played by Karoline Eckertz, is a charming little girl who acclimates to her new home with ease, especially with the patient help of Owuor. Hers is the most likable character in the film (along with Onyulo's Owuor). The elder Regina, played by Lea Kurka, loses the charm of her young self and is a routine teen. Onyulo gives a great deal of dignity as the family's friend. Matthias Habich, as the family acquaintance (to Jettel, much more) and fellow Jew, Susskind, lends nobility as a man who has learned to embrace his new home but still remain a Jew.

"Nowhere in Africa" is an untold Holocaust-era story that is intriguing and often striking in its depiction of a very unusual family of survivors.