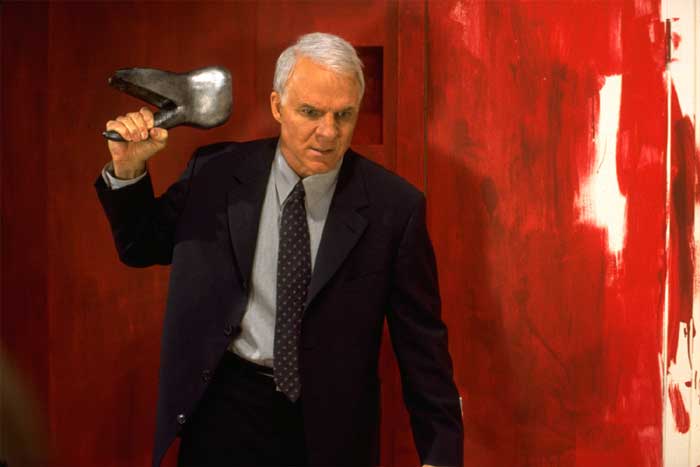 Dr. Frank Sangster (Steve Martin) enjoys a thriving dental practice. His no-nonsense hygienist/fiance Jean (Laura Dern) keeps his life in order and his bed on fire. But when Susan Ivey (Helena Bonham Carter) pays him a visit, successfully wheedling a drug prescription from him, Sangster's comfortable life is turned upside down in "Novocaine."

The best part of "Novocaine" occurs during its opening credits where eerie X-rays, which will intermittently appear throughout the film, are paired with Danny Elfman's "Edward Scissorhands" meets "Seven" score. When the story begins, in an office environment strongly reminiscent of Robert Altman's "Dr. T and the Women," it sustains interest for a while, before sinking into a hopelessly over-plotted tale where the players are jerked around by the whims of story line rather than character development.

Sangster discovers that the desirable Miss Ivey has doctored his prescription, so it's no surprise when she doesn't appear for her 7 a.m. appointment the next morning. She does appear, all innocent confusion, at 7 p.m. that night, however, and seduces Sangster in the dental chair, a scene Frank had suggested to Jean and been denied that very afternoon. The next morning he finds his entire office supply of drugs has been wiped out. With law enforcement breathing down his neck, Frank lies, hoping to allay Jean's suspicions and set things right on his own.

Frank tracks Susan down at a seedy motel, only to be threatened by her hot tempered brother Duane (Scott Caan, "American Outlaws"). This is the same guy Frank and his addict brother Harlan (Elias Koteas, "Crash"), Frank's bane and recent pad crasher, had scuffled with in a bar earlier. When Duane is found dead in Frank's home with Harlan missing, Frank becomes the main suspect.

Screenwriter David Atkins ("Arizona Dreams") shows style in his directorial debut, mainly by his aforementioned creepy use of X-Rays to punctuate the action and Frank's symbolic depiction with bunny rabbits. However, the Hitchcockian 'innocent man thrown into circumstances beyond his control' genre has far better representatives than "Novocaine" and this well assembled cast can't keep this one from spiralling out of control.

Steve Martin is capable of great physical comedy ("All of Me"), but here, his actions merely seem foolhardy. Helena Bonham Carter, in full "Fight Club" Marla mode, is sexy in a slouchy, rundown way, but brings little else to the table. Scott Caan is menacing as her brother, but is dealt out fairly quickly. Laura Dern is bright and chirpy, willing to put her kickboxing moves up against those that would bring down her man until her own faith in him is derailed. The uncreditted Kevin Bacon gets the most mileage out of his character, Lance Phelps, a self-absorbed actor shadowing police in research for an upcoming role.

Early on, Frank tells us 'The worst thing a man can lose is his teeth,' and Atkins doesn't spare us a queasy climax, but "Novocaine" is no "The Tenant," nor "Marathon Man." What "Novocaine" eventually is, is numbingly convoluted.