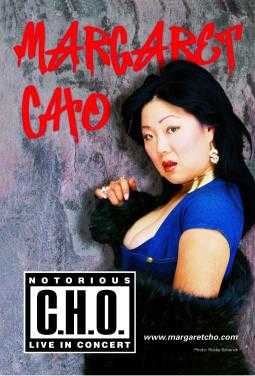 Margaret Cho follows up her 2000 concert film, "I'm the One That I Want," with more funny reflections on her Korean family, sex, gay lifestyles, sex, LA, sex, minorities and sex in "Notorious C.H.O."

Cho, who's first concert film was more like a group therapy session than comedy, lightens up considerably for her second. Her material's funnier and her timing's better. If you like Cho's raunchy brand of standup, "Notorious C.H.O." will fit your bill.

Cho begins this film with a simplistic bit of animation that pits her mother against a Black friend in a Korean family grocery. Featuring the retro-weird look of "Clutch Cargo" mouths, it's a bitty ditty that distinguishes her second concert outing. Director Lorene Machado ("I'm the One That I Want's" producer) and videotaper Kirk Miller then take up the action as the Seattle audience, reciting bits from the first film, buys tickets and arrives for the show. Mom and dad are interviewed, with Cho's father expressing happiness at his decision to immigrate to the U.S. where his daughter now has a platform. They seem to be very good sports.

Dressed down in jeans with her water bottles at hand on a stool, Cho takes the stage and imaginatively compares herself to Celine Dion via a Scottish gay bar. LA colonics, a bit on straight men menstruating, an experimental visit to an S&M club and the difference between straight and gay want ads all provide the yucks. Cho continues to use her trademark exaggerated facial expressions and repetition for emphasis, but she doesn't outwear their welcome this time around. She does repeat some of her material and not all of it works. As before, her best bits involve her mom. Be warned that we're in NC-17 territory here.

Visually, "Notorious C.H.O." has more to offer, with Cho frequently framed as her own image is projected looming behind her. While the camera actually moves behind the performer, the filmmakers still steadfastly refuse to use audience cutaways. Considering the outrageousness of some of the audience members (we've seen some elaborately outfitted drag queens make their way in) and the presence of Cho's parents, this insistence on 'purity of performance experience' is misguided. The audience does get a chance to participate once again as they file out.

Cho is an unlikely diva, but she's beloved by many. You may not like what she's got to say or how she chooses to say it, but thank God someone's got chutzpah enough to do it.

In preparation for seeing Korean-American comedienne Margaret Cho's latest comedy concert film, "Notorious C.H.O.," I took the time to watch her previous standup routine, "I'm the One That I Want." I was less than pleased with the latter film, finding Cho's examination of her recent foray into TV stardom, drugs, alcohol, her mom and gay sex to be uncompelling and, mostly, unfunny - to me. I steeled myself for the second comedy feature, expecting the same shtick as before.

To my pleasant surprise, the comedienne has work on her routine and has matured in her craft. She succeeds in making me laugh a heck of a lot more this time around. Cho still makes her forays into gay and straight sex scenes, drugs and the details of getting a high colonic in LA, but she also mines, further, the rich material provided by her mom. The comic's routine and delivery have tightened up considerably, making Cho more appealing to a broader demographic than her previous, mostly gay and lesbian following.

Cho reaches out and embraces other material not explored in the earlier flick. She does more jokes about straight people, such as what a hetero male would do if faced with having his period every month. I like her best when she holds her comedy mirror up to the viewer to let us know just what we are like.

The film is preceded by a short, simple animation about respecting your fellow minority members then segues to audience interviews and a talking heads 'view with Cho's mom and dad. You can see why, in the brief time listening to mom, just why the comic selected her as one of her main, funniest subjects. Cho's description and mimicry of her mother riding a camel in Israel is priceless.

Margaret Cho is definitely an acquired taste, comedy-wise, and I certainly wouldn't go to see her by choice. But, her followers enjoy her humor, if the movie house audience is any indication, and Cho has expanded her repertoire to one that, at least part of the time, has appeal across the board.

The techs this time around are just as stodgy and unimaginative as they were in her previous feature with the camera never leaving the comic to cutaway to the audience for reaction shots, a minus in my mind. Her material, though, shows Margaret Cho to be improving in her craft and, even though she is not my cup of tea, she made me laugh a few times. But, I don't think she is a taste I will acquire anytime soon.