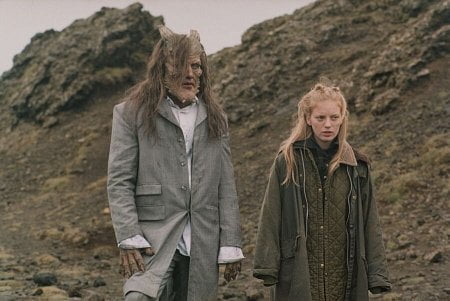 In a world where the federal government is on strike, terrorism is the norm and a Hollywood studio has just purchased New York City, young Beatrice (Sarah Polley, "The Claim") is a rare example of human kindness and decency. She works, however, for a ratings mad news show where 'The Boss' (Helen Mirren, "Gosford Park") will stop at nothing to bring calamity to the masses. When Beatrice discovers an audiotape in the mail with a monster claiming to have killed the news crew assigned to find him, including her cameraman fiance Jim, she pleads for the assignment to go to Iceland and uncover the truth in writer/director Hal Hartley's "No Such Thing."

This fairy tale/fable/horror film homage/Christ myth story had some good ideas to explore, but goes off the rails when the action leaves Iceland. Uneven acting and some blatant technical gaffes further detract from this oddball outing.

Beatrice's journey is hampered at every turn. Taxis won't go to the airport due to terrorists threatening to bomb bridges and the subways have been nerve gassed. Her flight is rerouted to Belgium and a junkie tries to steal her purse in the airport. Finally the flight plunges into the Atlantic. Beatrice thrills her boss back home by being the only survivor, but she most go through unspeakably painful surgery to regain her ability to walk.

Kindly Dr. Anna (Julie Christie) helps Beatrice find her way to the northern wilds of Iceland, where the final trek can only be accomplished on horseback, then foot, because even the horses will only venture so far (shades of Dracula's castle). The few villagers who live near the monster's island rock get her drunk and deposit her, Andromeda-like, outside his lair as an offering. The foul-mouthed, alcoholic, horned beast (Robert John Burke, "Flirt") lives in misery because of humankind but cannot die. Beatrice agrees to help him find the one man who can kill him, Dr. Artaud (Baltasar Kormakur, "101 Reykjevik"), if he'll agree to stop killing.

Like "King Kong," the monster accompanies the maiden back to NYC, where she falls into a decadent lifestyle and he becomes the subject of painful scientific experiments, while Artaud is kept at bay, all orchestrated by Beatrice's boss. Uncovering the treachery, Beatrice brings Artaud to the monster.

Polley's Beatrice is vacant, delivering lines as if directed in a children's show, perhaps Hartley's attempt to give his film an otherworldliness. The kindly saint is merely a blessed fool. Burke carries his monster well physically. An early speech is stilted, but the actor injects humor and poignancy into the character.

Helen Mirren steals every scene she's in as the grasping, chain-smoking media exec. Outfitted in purple and black ensembles and a platinum bob, she's like a corporate Cruella. Informed of Beatrice's presence on the doomed aircraft, Mirren is clearly confused as to how to react, recovering to bark out an order. This is a great performance in a maddeningly misguided film. Also good in smaller supporting roles are Christie, who provides some much-needed warmth in a largely inconsequential role and Annika Peterson as Mirren's perplexed assistant. Kormakur is comical, playing the mad scientist role as if he were in a Guy Maddin film.

The film is nicely lensed on location by Hartley regular Michael Spilling and Mark Rappaport's Creature Effects Company has created a unique look for the monster, capturing its rocky environment in its look. The film slips, technically, however, with some obvious sound dubbing mismatches and an ill-timed stunt, where the monster breaks a cane over his knee a good six inches before it makes contact. Hartley's own artsy musical compositions are interesting, but don't particularly serve his film.