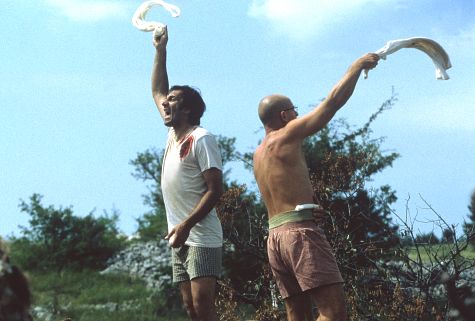 A squad of Bosnian soldiers creeps through the fog-shrouded nightscape toward the Serbian lines. When daylight breaks and the fog lifts, the men find themselves under the guns of the Serb forces and are cut apart with only one, Chiki (Branco Djuric), left alive in the buffer zone between the two armies. He kills one of two Serb scouts sent to investigate and has a standoff with the other, Nino (Rene Bitorajac). One of Chiki's fallen comrades, badly wounded but still alive, was booby trapped by the Serb soldiers, UN forces are called in and the world media sees the little drama as big news in "No Man's Land."

When a Bosnian relief squad gets lost in the fog, only one, Ciki (David Straitharn look alike Branko Djuric), survives, but he finds himself stuck with the dead body of a comrade in a trench in between enemy lines and safety. When two Serbs come in to investigate, they rig the dead Bosnian body with a spring-loaded bomb before Ciki manages to take out the officer. Now Bosnian Ciki and Serbian Nino (Rene Bitorajac) find themselves in the political conundrum of "No Man's Land."

Writer/director Danis Tanovic's Cannes 2001 Screenplay winner is a caustically funny, if ultimately devastating, anti-war film. On the flip side, Tanovic's message isn't new and he aims for broad targets.

Soon after Ciki and Nino discover that waving white flags only draws fire from each side, they find they're not alone - that dead body, Nika's friend Cera (Filip Sovagovic), is alive, albeit effectively disabled. Each tries to gain the upper hand of the situation. They have the requisite 'Who started the war?' argument, followed by the 'I have a gun and you don't' rationale. After the weapon changes sides a few times, a shaky truce is established.

Then the UN is called in. While Sergeant Marchand (Georges Siatidis), leader of the reconnaissance trio, is a level-headed, sensible man (and the only true hero of the story), he's hamstrung by his higher ups who are more intent on covering their asses. Marchand defiantly suggests getting the two men out anyway, in order to call in a bomb squad to deal with Cera, but Nika won't leave him and Ciki's willingness to leave angers him into violence and eroding the tenuous trust.

As no recent satire is complete without pricking the media, enter BBC correspondent Jane Livingstone (Katrin Cartlidge, "From Hell") and her cameraman. Sensing the truth behind Marchand's diplomatic words, she serves his commanding officer, Colonel Soft from the UN High Command in Zagreb (Simon Callow, "Four Weddings and a Funeral"), an ultimatum. Soft and his secretary copter onto the now circus-like scene as everyone awaits the prognosis of a German bomb expert. There is now more world focus on getting three guys out of a ditch than on the war which placed them there.

Tanovic, a natural with dialogue, keeps the action moving along at a brisk pace. Although most of the film takes place in a trench within a field, he keeps the visuals interesting by cutting away to the Zagreb UN office, interior of Marchand's tank, and various check points, in addition to showing the action via Livingstone's live reporting.

Tanovic keeps a trump card up his sleeve for his film's conclusion. As he slams home the idiocy and futility of war and we expect everyone to pack up and go home, he lets one last, horrible irony turn his giddy circus into a shocking void. "No Man's Land" makes it's message go down with a laugh before it sucker punches you.

The futility and grim reality of war are the basis for this day-in-the-lives of the grunts that are called upon to fight the battles started by powers far away from the front lines. As the fog lifts in the opening minutes, the Bosnians find themselves in the middle of no man's land facing heavily armed and entrenched Serb forces that blast the small unit apart. Only Chiki, wounded in the shoulder, survives the attack and hides out in the trench positioned between the opposing armies. He has to be patient and wait for night to fall before he can work his way back to the safety of the Bosnian lines.

Meanwhile, the Serbs send in two soldiers, one a veteran, the other, Nino, a rookie, to reconnoiter the scene and set mines, one of which is placed under the body of a supposedly dead Bosnian trooper. Chiki, watching the booby traps being laid, is angered by the deceit and guns down the two Serbs, killing the vet. The two wounded opponents are at a standoff when they learn that the mined soldier is, in fact, alive and they put their lives at stake to get UN assistance to save them and defuse the mine.

A British field correspondent, Jane Livingstone (Katrin Cartlidge), arrives on the scene and, through the worldwide television media, escalates the tiny drama to international proportions. This prompts the head of the local UN forces (disparagingly referred to as the "Smurfs" by combatants on both sides), Colonel Soft (Simon Callow), to get his peacekeeping troops involved, including an explosives expert to defuse the mine. Circumstance and the public eye make the rescue effort far more involved than just saving the lives of three lowly soldiers and decisions need to be made on high. Will the wounded men be saved or will they remain, simply, pawns in a war that was not their making?

First time writer/director Danis Tanovic enters the international film forum with a solid work that depicts the sudden horror of war, but also injects battleground humor that points out the cynicism and acceptance of the toll it takes on the individuals who do the fighting. In one moment of mirth a Serb soldier sits in his trench reading a newspaper and lamenting to his comrade about how tough the folks in Rwanda have it. The comment is, at once, both funny and sobering. Another wistful interchange, between Nino and Chiki, reveals that, in peacetime, the both knew (and, maybe, loved) the same girl. Tanovic's sense of whimsy, comedy and drama, and his ability to combine them, makes the story both entertaining and thought provoking.

The technical contributions also help to raise "No Man's Land" to have an international appeal. (It is the first Bosnian movie to be put forth as a Best Foreign Film contender for Academy consideration.) Production design by Dusko Milavec does an effective job of creating the real, dangerous world of trench warfare. The film doesn't have the elaborate scope of a film like Stanley Kubrick's "Paths of Glory, " but it still captures the perils of battle and the fear-laden boredom that is punctuated with moments of sheer terror. The production belies the obviously small budget the filmmakers had to work with.

The film ends on a cynical note - I didn't expect sunlight and flowers, of course - that is a critical treatise of the Serb-Bosnian conflict in particular and war in general. "No Man's Land," with its matter of fact nature, turns out to be one of the best anti-war films to hit the big screen in years. Tanovic gives us a mature, thoughtful story with sympathetic characters and a strong statement against war, whatever kind.