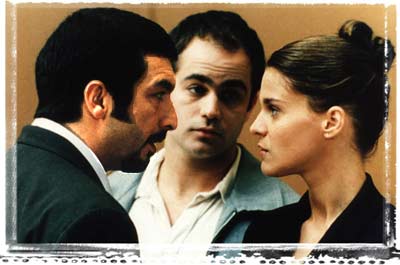 "Who isn't a thief?" is the question asked in the story of two small-time swindlers, Juan (Gaston Pauls) and Marcos (Ricardo Darin), whose paths collide in a convenience store and quickly leads to a half-million dollar forgery scam on a big time gangster about to be deported in "Nine Queens."

When Juan (Gaston Pauls) pulls off a bill changing scam with a convenience store cashier, he's emboldened to try it again right after a shift change and is challenged. Stranger Marcos (Ricardo Darin) comes to his rescue, introduces himself as a fellow, more experienced con artist, and asks Juan to become his partner. No sooner do the duo work their first job together than a phone call from Marcos' sister Valeria (Leticia Bredice) results in a potential half million score - the sale of a counterfeit stamp rarity, a Weimar sheet misprint known as the "Nine Queens."

Argentinian writer/director Fabian Bielinsky has attempted to fashion one of those quick-moving sleights of hand that keep the audience guessing, but his tale will be all too familiar for anyone who's seen George Roy Hill's 1973 film, "The Sting." Bielinsky's enjoyable but slight tale gives his audience a splendid introduction to the real streets of Buenos Aires, filmed clandestinely by Marcelo Camorino.

Juan is initially uncomfortable with the bolder tactics of his new partner, upset that their first target together was a trusting old woman. When Marcos appears on the verge of dumping his new apprentice, however, Juan rebounds by making a wager that will text his skills and passes with flying colors. Their relationship becomes more complicated after a phone call from Marcos' sister Valeria. She's lower level management in a hotel and she doesn't want Marcos and his embarrassing criminal behavior darkening its lobby, but she's forced to call him when another, older, con man falls in a lavatory and pleads for her brother. Sandler (Oscar Nunez), a counterfeiter, was about to make a huge deal with a wealthy businessman. Marcos ruthlessly steps in on his deal, bringing Juan along for a cut.

Of course, their plan is jeopardized at every turn by the plethora of thieves that seem to surround them. Juan's cut increases every time he helps Marcos clear another hurdle, but finally, Juan is called upon to put his life savings on the line. Having witnessed Marcos, whose sister has accused of cheating herself and the little brother Federico (Tomas Fonzi) out of their inheritance, try to swindle everyone, including himself, he must decide if it's a gamble worth taking.

"Nine Queens" characters are engaging and occasionally amusing, but director Bielinsky never rises above simply putting them through their paces. He doesn't achieve the liftoff the film needs to sparkle, instead letting a leaden monotony set in. The film is goosed up with the introduction of Sandler's wealthy sister-in-law, who lives in a garish apartment with a younger boy toy, but this lively and amusing character makes too hasty an exit. The multi-layered con's final moves become labored by an unconvincing promise between Valeria and Marcos involving their younger brother's faith in his unsavory sibling.

"Nine Queens" works as a look at a Buenos Aires the tourist rarely gets to experience, but its swindle isn't slick enough.

"Nine Queens" is a neatly handled who's-doing-whom story that holds strong ties to such grifter films as "The Sting" and David Mamet's "House of Games." But, this Argentine crime thriller is long on dialogue and short on action. Things begin slowly and steadily as Juan pulls a bill changing scam at a local convenience store. He gets greedy as he watches the shift change and decides to double dip and pull the same scam again, minutes later. He is caught at his ploy and, suddenly, a plainclothes cop is hustling him out of the store, arrested for his crime.

But, things are not what they seem and the "cop" turns out to be a fellow con man, Marcos, who propositions the young scam artist to team up and make some real money. Juan reluctantly agrees and Marcos introduces a plan to con a big time hood who is only hours away from being deported. Marcos knows a guy, an old time forger, Sandler (Oscar Nunez), who has in his possession a set of counterfeit stamps called the Nine Queens. The duplicates are so good that only close scrutiny would reveal them as fakes. This fact, and because the gangster, Vidal Gandolfo (Ignasi Abadal), is about to be shipped out of Argentina, cause Marcos to bring Juan in on the scam that could net them a cool half million dollars.

This is where "Nine Queens" gets a bit too full of itself, as the story becomes a swirl of characters brought in to twist the plot around. It is a question of who is scamming whom as Juan and Marcos run into a myriad cast of characters who have their hands in the con game. Marcos's sister Valeria is the beautiful assistant manager at the hotel housing Vidal. She has a bone to pick with her brother and threatens his arrest if he brings his thieving ways into her hotel. It turns out that Marcos stiffed his own sister and younger brother, Federico (Tomas Fonzi), from an inheritance. Valeria will help her wayward brother if he'll fess up his scheme to Federico. All sorts of other colorful characters are brought in to help with the con.

"Nine Queens" becomes a shell game that requires close attention to figure out who is screwing whom. This is the major problem with the story as, if you stop paying attention for a moment, you lose the thread of what's going on. Characters are brought in to the story to propel things along and statements about Argentine society - who isn't a thief in that country - are made repeatedly. By the end of the film, as things wrap up neatly, I was glad that everything gets explained.

First-time helmer/scribe Fabian Bielinsky does a fair job in creating a Mamet-like whirl of characters and cons as the swindlers, Juan and Marcos, ply their trade on their unsuspecting victims. As the plot thickens, the duo tests each other's ability in their scamming game. Juan is reluctant at first to team with the unknown Marcos, but the promise of a big killing for a day's work is too much to resist. The trouble is, you know that someone is conning someone and I got mired in trying to unravel the plot. A more astute script or director may have made this a less hectic tale. Instead, "Nine Queens" is a benign story of a sting operation that moves along at a good clip and ties it all up in its "surprise" ending - although I was little surprised at the conclusion.

Techs are first class with lensing by Marcelo Camorino a definite plus. The images are crisp and clear with enough camera movement to keep things visually interesting. The fast-paced editing, by Sergio Zottola, adds to the energy behind the camera.

There is imagination and intelligence buried in this swirling con man's tale. With a bit of seasoning, Fabian Bielinsky may someday be Argentina's answer to David Mamet, but not quite yet.