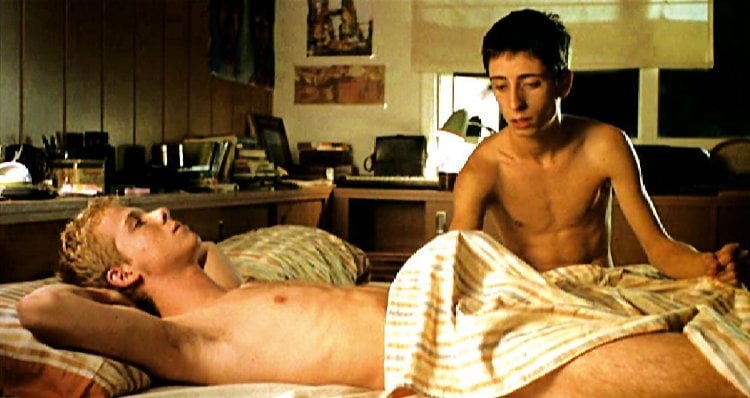 Dani (Fernando Ramallo) invites his best friend, Nico (Jordi Vilches), to spend the summer holiday at the family beach house in southern Spain. The cool thing is that Dani's parents are off on a trip of their own to Egypt.  Late night dates and house parties are the order of the day as the two boys
enter the next stage of their sexual awakening, but each takes a very different path in "Nico and Dani."

Sixteen year old Dani's (Fernando Ramallo) riding high. He lives in an arresting modern home with a pool on a cliff overlooking the ocean. It's the onset of summer vacation, his trusting parents are leaving him to take a trip to Egypt and his best friend is coming out from the city to
join him in the Cannes 2000 Critics Week award winner, "Nico and Dani (Krampack)."

Adapted from Jordi Sanchez's play by director Cesc Gay and Tomas Aragay, the Spanish "Nico and Dani" is an honest, warm and funny coming of age tale in which two best friends come to a crossroads together only to take different paths.

When the duo meet the brazen Elena (Marieta Orozco) and shy, virginal Berta (Esther Nubiola), Nico sets to pairing the foursome off and making dates while Dani gets increasingly annoyed that the two don't spend more time alone together. Dani has an unsatisfying encounter with a drunken Berta, then begins to spend time with an older, homosexual writer who's a client of his father's (in a neat, if disturbingly offhand, parallel, Dani's treated much the same as he treated Berta).

"Nico and Dani" is refreshing after the lowbrow sniggering found in American teen sex comedies. These kids act like real teenagers - young enough to still romp and play, old enough to want to appear sophisticated and sexually desirable (amusingly enough, not too far afield from how the
film's adults are portrayed).

Blond, blue-eyed Fernando Ramallo plays Dani with an air of seriousness, appropriate considering his character is facing a more difficult lifestyle choice than his buddy. Newcomer Jordi Vilches (a circus performer!) is hilarious as the confidently goofy Nico. He walks a line between
obliviousness and acceptance. The film is given a bright, sunny look by cinematographer Andreu Rebes and a lively, unusual score by Riqui Sabates.

"Nico and Dani" succeeds in portraying a difficult and confusing time in human development with humor, compassion and truth.

This little coming-of-age flick is one of the most honestly rendered tales about growing up that I have seen in a long time. Sophomore Spanish helmer Cesc Gay (who cowrote the screenplay with Tomas Aragay) takes a very conventional tale about two friends on the verge of adulthood and infuses it with a refreshing approach of no excuses, no explanations for growing up.

The two boys playing the title characters are naturals. Fernando Ramallo is the experienced actor and plays Dani as a young man who finds his sexual desires draw him to boys and not girls. Nico, on the other hand, had no problems with his same sex adolescent explorations with Dani, but now is very much into girls. When Dani's friend Elena (Marieta Orozco) and her friend Berta (Esther Nubiola) arrive on the scene, Nico is thrilled with the chance to be with a woman. Dani is not so inclined and wants his boyhood closeness to Nico to continue unabated.

Director Cesc Gay, with his talented young actors, takes this simply story of growing up and gives it a fresh direction that we don't usually see in the American equivalent. Here, in "Nico and Dani," there is no judgement made over the boys' choices in life - Dani decides on a gay lifestyle,
while Nico shrugs off his friend's decisions and makes his own hetero choice. The film leads the boys to the crossroads of life and they must each choose their own path to follow.

"Nico and Dani" is a world class teen film that has meaning in many different cultures and countries, not just Spain. This is the kind of little, independent film that has so much to tell its teen target audience that I hope it can succeed internationally. I wish there were more such honestly rendered and thoughtfully told coming-of-age films.