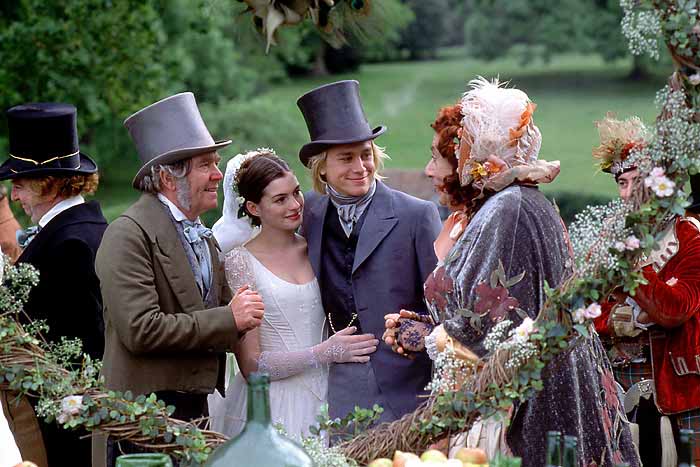 "There once lived, in a sequestered part of the county of Devonshire..." is the opening line of Charles Dickens epic novel, Nicholas Nickleby, and writer/director Douglas McGrath takes on the daunting task of adapting the 800-page Victorian-era book and bringing it to the screen. The result, despite the oft-bleak depictions displayed, is a light, optimistic story of the life of young Nicholas (Charlie Hunnam), a kind, intelligent teenager who is thrust into the role as head of the Nickleby family when his beloved father dies. Penniless, he, his mother (Stella Gonet) and sister Kate (Romola Garai) head to London to seek help from his uncle, Ralph (Christopher Plummer). But, the little family does not get the help and, instead, are broken apart in "Nicholas Nickleby,"

When an idealistic gentleman of little fortune dies in rural England, his nineteen year old son is left to fend for himself as well as his mother and younger sister. They travel to London to engage the aid of Uncle Ralph (Christopher Plummer, "A Beautiful Mind"), but find the cold-hearted opposite of his brother. Ralph's actions separate them, but the resourceful young lad embarks on an epic journey to reunite and expand the family of "Nicholas Nickleby."

Director Doug McGrath ("Emma") has pared down the gargantuan Charles Dickens novel to a feature film length (130 minutes) which focuses on the stories of Nicholas and his Uncle Ralph and set it back twenty years to 1830 to make use of the Industrial Revolution as a backdrop. The results are thoroughly entertaining and often surprisingly funny, although Charlie Hunnam ("Abandon") is bland as the totally good Nicholas and his romance with Madeline Bray (Anne Hathaway, "The Princess Diaries") is too abruptly handled to inspire a rooting interest.

As Ralph sends his mother (Stella Gonte) and sister Kate (Romola Garai) out to do seamstress work, he dispatches Nicholas to make his living as a teacher at the bleak and squalid boys' orphanage run by Wackford Squeers (Jim Broadbent, "Moulin Rouge") and his wife (Juliet Stevenson, "Emma"). Appalled at the mistreatment and injustice he sees there, Nicholas befriends young Smike (Jamie Bell, "Billy Elliot"), a crippled boy enslaved to the Squeers. Fearing for Smike's life, Nicholas takes the lad and runs off to find a new life.

They're given aid by a man delighted to hear that Squeers has been had, (whom they later discover is Squeers' son-in-law) and then run into Vincent Crummles (Nathan Lane, "Love's Labour's Lost"), the cheerfully delusional owner of a travelling performing troupe. Although Nicholas proves a profitable Romeo, Crummles doesn't keep the lad from continuing on his way when he learns via letter that Uncle Ralph has been practically pimping his sister as business bait with the horrid Sir Mulberry Hawk (Edward Fox, "The Importance of Being Earnest"). The duo return to London and the charmed Nicholas lands a dream job with the Tweedledee and Tweedledum-like Cherryble brothers (Timothy Spall and Gerard Horan) who are not only generous but know the whereabouts and circumstance of the young woman Nicholas is smitten by.

As Nicholas begins to right his family, including Smike (who holds a secret torch for Kate), his uncle's valet Newman Noggs (Tom Courtenay, "Last Orders") points Nicholas toward information that will unveil a terrible family secret and find Ralph a shattered man.

Everything is quite black and white in "Nicholas Nickleby," which is peopled with the goodest of good and villainously evil characters. While Hunnam isn't a strong lead, the delights of "Nicholas" lie in its (mostly) exceptional supporting ensemble. Kudos to the wildly inventive casting which includes Barry Humphries (aka Dame Edna) as Mrs. Crummles! Christopher Plummer finds both the coldness and emotional awakening of Uncle Ralph, a forerunner to "A Christmas Carol's" Scrooge, although not a man left as happily. He's beautifully paired with Tom Courtney, a comic delight as his shifty valet. Another pairing that enthralls is the deliciously evil Squeers couple, with Broadbent playing Wackford with a twisted air of something that's almost gaiety while Stevenson gives his Mrs. the aura of an S&M Mistress. Along with their children Fanny (Heather Goldenhersh) and Little Wackford (Bruce Cook), they're the Osbournes or Addamses gone bad.

Doug McGrath's adaptation of "Nicholas Nickleby" may not be the definitive one, but it is a fun entertainment stuffed with small dazzlers.

Helmer McGrath gives an old-fashioned telling to a classic story of good and bad and how kindness and understanding make the world a better place. This is a hopeful story that has a simple, black-and-white view of the world. Nicholas is hung out on a limb when his dad dies and the 19-year old now must care not just for himself but his mum and sister, too. Brought up to be compassionate and kind, Nicholas assumes that his Uncle Ralph will do all he can for his brother's struggling family. The dastardly Ralph has no such intent and sends Nicholas off to teach at the Dotheboys Hall, a state-subsidized establishment where the owners, Wackford Squeers and his sadistic wife (Juliet Stevenson), keep their orphaned wards in the most appalling state of filth and hunger. Suffering most is long indentured Smike (Jamie Bell), a physically bent boy that Squeers has kept in virtual slavery for years.

Nicholas resists the cruelty of the school's masters and eventually intervenes when the wicked and brutal Mrs. Squeers attempts to beat poor Smike for his desperate attempt to escape his fate as a slave to the sick couple's malice. Nicholas's sense of justice makes him snatch Smike from the Squeers's evil clutches and they set off on an adventure to return to London and make the Nickleby family whole again. The original work by Dickens was serialized in many newspapers (some of his works, when delayed arriving in America, reportedly caused riots) and, as such, is an episodic work that brings Nicholas and Smike from one adventure to another as they meet and are befriended by a bizarre collection of colorful characters that show the inherent kindness in man. This is contrasted with the introductions and elucidations of the sour side of humanity in the forms of Uncle Ralph, the Squeers and Sir Mulberry Hawk (Edward Fox), a particularly lecherous and unlikable client of the senior Nickleby.

When Nicholas spirits Smike away from the source of his torture they encounter a myriad collection of kind-hearted folk that provide aid, employment and assistance to fulfill their quest to return to London. They meet Vincent Crummle (Nathan Lane), his wife (The incomparable Dame Edna Everage, AKA Barry Humphries) and their traveling troupe of actors and are hired on the spot. Thus enabled, they return to London and Nicholas seeks employment and fortune to make things right. He is constantly rejected and denied until he answers the help wanted ad by the Cheeryble brothers, Charles and Ned (Timothy Spall and Gerard Horan), and lands the dream job for an aspiring 19-year old. Romance and intrigue fill the last half of the film as Nicholas must protect, to the end, his friend Smike; keep his sister Kate from the sinister clutches of Ralph and his slimy cronies (with James Fox giving a particularly sleazy perf as the lecherous Sir Mulberry) who hold less than chaste desires for Kate; and fall in love and also save his own love, Madeline (Anne Hathaway).

Very nice production values accompany the large ensemble cast that makes "Nicholas Nickleby" a pleasant Dickensian journey. The behind the camera efforts bring us back a century and a half with costuming (Ruth Myers), production design (Eve Stewart) and lensing (Dick Pope) all contributing to putting us in the world of Charles Dickens. Scripter McGrath gives his helming half a solid condensation of a story that was done on stage in London in a marathon 9½-hour adaptation. As such, much of the details of the book are left out of his adaptation but he captures the heart of Nicholas Nickleby. The lines of good and bad are broadly drawn with no gray areas in any of the characters' makeup. It is a bit simplistic but McGrath uses this straightforwardness to good effect. Nicholas is a really, really good hearted young man and he will not be swayed from doing the right thing. Uncle Ralph is a despicable character (redeemed in the end. This is Dickens, after all) and the Squeers are downright sadistic and greedy.