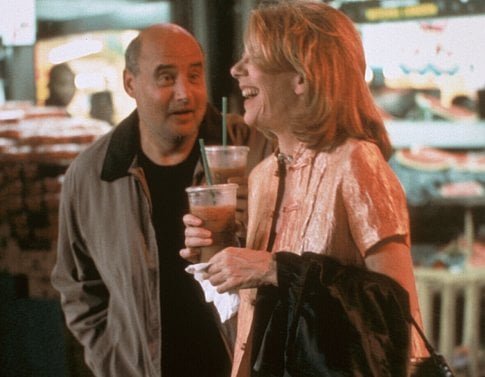 Christopher (Jeffrey Tambor, "Pollock") is a 54 year old divorced exterminator who has alarmed his best friend Earl (Bill Duke, "The Limey") by wondering if he might be gay. Grace (Jill Clayburgh, "Rich In Love") is also 54, divorced and has just lost her only child to college. When the two collide in a gay bar, they're interested enough to pursue the relationship, but as to love, both agree "Never Again."

Writer/producer/director Eric Schaeffer ("If Lucy Fell") costarred with his two leads on the short-lived sitcom "Everything's Relative" and wrote this screenplay for them. He got the far better end of the deal.

Christopher leaves for work without his pants and gets berated by his mother (Suzanne Shepherd) when he visits once a week. He plays jazz with buddy Earl in a small club in the Village and fails to perform sexually with a young woman who admires his music. He tells Earl about his problem and the homosexual dream which followed. 'So, now you're an impotent gay man?' asks his buddy. Christopher decides to follow his new urge and makes an appointment with a beautiful transvestite. When Alex (Michael McKean, "Best In Show") doesn't live up to his ad, Christopher wanders into a gay bar.

Elaine (Caroline Aaron, "Pumpkin") and Natasha (Sandy Duncan) try to cheer up Grace by suggesting she date (actually their suggestions are a bit coarser). Using an online dating service, they engage Harry Appleton (Peter Dinklage), a man whose picture shows a knight in armor with a white horse. When he turns out to be a midget who rejects Grace, Grace drags her buddies into a gay bar to drown her sorrows. When she wanders up to the bar, Christopher mistakes her for a drag queen (Schaeffer's thoroughly insulting idea of a 'meet cute').

Schaeffer's screenplay has an occasional glimmer of originality (the 'talking point' napkin Christopher draws up for Grace on their first date) and good dialogue, although it is telling that the dialogue improves dramatically with the level of performer delivering it. Contrived is the best word to describe Schaeffer's writing, however. A sex-reversed knight in shining armor theme is carried first with a strap on dildo and s&m mask, then later with the real thing and is awkwardly plopped onto the story. Characters frequently act unbelievably, such as when Grace's daughter (Lisa Rabe, Clayburgh's real life daughter) returns home from school and barges into her mother's bedroom with a new boyfriend in tow. They even continue to stand and stare when it is evident that Grace is not alone.

Jeffrey Tambor gives a moving performance as a lonely older man who stubbornly continues to behave in a manner that will keep him that way. While the script paints him as the cliched commitment phobic male, Tambor makes Christopher's brave declaration of love to Grace truly moving. He also has great chemistry with Bill Duke, who is hilarious deadpan as the well meaning friend who points out the obvious.

Jill Clayburgh works well with Tambor, but comes across a bit hysterically when he's not around. Schaeffer continuously emphasizes her moist, earnest eyes in close up to the actress' detriment. Aaron and Duncan are the type of friends who only exist to hear about the lead's problems. In one scene, Michael McKean makes far more of an impact. His appearance may make one laugh, but McKean brings a pathetic poignancy to the character of the man/woman for hire.

Christopher and Grace are two lonely people, both in their 54th year, and certain that they will never find love again. That is, until they meet one another and find out that there is still hope for romance in "Never Again."

Jeffrey Tambor and Jill Clayburgh star as a pair of lovelorn, over 50 New Yorkers. Christopher (Tambor) is an exterminator who moonlights as a jazz musician at a local Soho club. His many years of one night stands make him question his sexual orientation. Grace (Clayburgh) is a long time divorcee who is looking, with the help of her friends, to start life anew.

Christopher, much against the advice of his best friend and confidant Earl (Bill Duke), has decided that, since he has had trouble performing with women, he may, in fact, be bisexual. He goes to a gay bar but, instead of finding a man for himself, he meets Grace whom he initially thinks is a cross dressing guy. Their meeting is so strange that the two are immediately drawn to each other. When Christopher, out of curiosity, asks Grace about her sexual orientation she declares that she is a "no sexual." Christopher then tells Grace that his life motto is "never again" to be involved in a romantic relationship. The pair, thus non-committed, proceed to have some very satisfying carnal knowledge of each other and it looks like they may have finally found their mutual soul mates. But, if this were true, the film would have only been 30 minutes long.

Director/writer/producer Eric Schaeffer benefits greatly with the casting of Jeffrey Tambor and Jill Clayburgh in the principle roles of Christopher and Grace. Tambor gives an impressive character study of a lonely, middle aged man who has not had a "relationship" with a women since his one and only, short lived marriage decades ago. Since his divorce he has lived a reclusive life of brief encounters with the opposite sex. He works (with his mother in their exterminator business) and plays his jazz music with best friend Earl. Christopher is so set in his ways that, when he falls for Grace, his reaction is to reject the relationship as ill-fated, despite the obvious attraction and affection he feels for the lady. I have only seen Tambor in lighter comedies like "The Larry Sanders Show" so I didn't know he had it in him to give such a finely textured performance.

Clayburgh's Grace has a support mechanism with her best friends Elaine (Caroline Aaron) and Natasha (Sandy Duncan) and, as such, isn't given quite the wings that Tambor has to fly with in her role. Grace is a smart, thoughtful woman who has, until she meets Christopher, resigned herself to her self-imposed no sexual status. The actress does a fine job portraying a woman that has given up on the idea and possibility of ever having a romance again.

Bill Duke gives the best, richest performance as the taciturn Earl, a man who holds a great deal of affection for his friend, Christopher, and does his best to help guide the man to happiness. Michael McKean gives a humorous and sad perf as a transvestite that Christopher seeks out to resolve his confused sexuality. Aaron and Duncan play the part of the Greek chorus for Grace as they, too, try to guide their friend to find love and romance.

It's fortunate that the actors are able to put a believable spin on their characters as the screenplay, by Schaeffer, contains many inane moments that are supposed to be funny and fail. Grace's blind date with a little person; Christopher's inept attempt to pick up a male partner at the gay bar; an extended, not funny sequence involving a strap-on dildo and a B&D mask; Grace and Christopher caught in flagrante delicto by her home-from-college daughter; these scenes are, generally, all carried on far too long so any humor is lost and the gag goes flat. Shoot the screenwriter for this. Techs are unremarkable.

To Schaeffer's credit, stories about middle aged romance are not tumbling out of Hollywood or independent film so I must laud the helmer/scribe for his intent. Unfortunately, the good and different idea is not handled well and, except for the fine star performances, there is little else to recommend "Never Again."