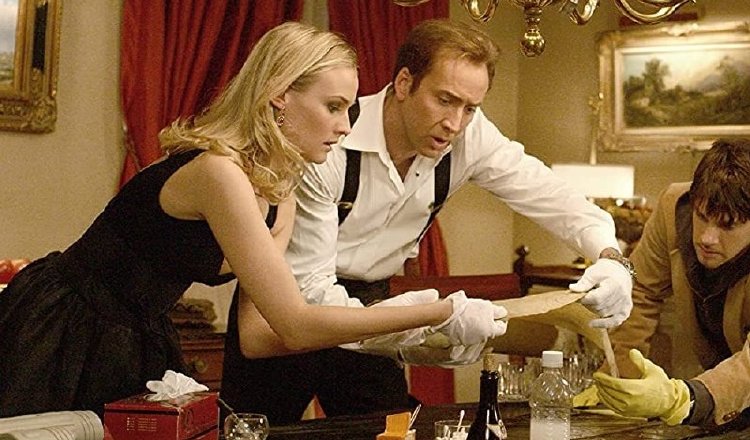 What if you do something that everyone considers wrong but, in your heart, you know that it is right? This is the quandary that Benjamin Franklin Gates (Nicolas Cage) must face when he learns that the priceless, historical Declaration of Independence has, on its back, an invisible map that leads to untold wealth in Uber-producer Jerry Bruckheimer’s “National Treasure.”

On the heals of the very popular adventure novel, The Da Vinci Code (by Dan Brown), “National Treasure” takes many elements of that book (intentional or not, you decide) – Knights Templar, hidden ancient treasure and secret codes are just some of the things in common – and adds the Declaration of Independence and its invisible map to the mix. But, despite the complicated treasure hunt, the film falls solidly into formula.

Nicolas Cage does his best with the totally routine material and tries to introduce some humor into his action figure character and just guess who is his ancestor! Justin Bartha, too, gives the proper irreverently comic touch to his high tech buddy role, even if it is thoroughly clichéd. Diane Kruger, as the beautiful, smart heroine gives a yeoman try but is weighed down with a monotonously familiar (and not particularly well drawn) character. Sean Bean is saddled with being the not-so-evil-and-kind-of-stupid bad guy who is readily duped by Gates and sent on more than one wild goose chase. Jon Voight, as Ben’s cynical, been-there-too-often father who acts as the film’s Greek Chorus. Christopher Plummer briefly cameos as grandpa Gates but escapes the movie after dutifully delivering his wise platitudes. Harvey Keitel does not have the same luck with his walk-through perf as the dedicated FBI guy on Gates’s heels.

Techs are, as expected, high quality and make the film look good, at least. Production design, by Norris Spencer, carries an Indiana Jones quality that is nice to see but dumb in its execution with hoary torches readily bursting to life at opportune moments and immense treasures hidden, somehow, for thousands of years. The suspend disbelief quotient is high and required of the viewer as clues abound – the press material claims that you will never look at a dollar bill the same way, though I have yet to even glance at a buck since sitting through “National Treasure” – and dramatic coincidences conveniently happen repeatedly to push the laden story forward. Photography, by maestro Caleb Deschanel, puts all its energy into the artful handling of capturing the action. Techs are way better than the story has a right to.

National Treasure” is fodder for the masses and will likely make a tidy sum. Bruckheimer knows his business and will undoubtedly draw big numbers opening week but truth be told, you should wait until video release. It will save you the money better spent seeing “The Incredibles,” a far superior action adventure