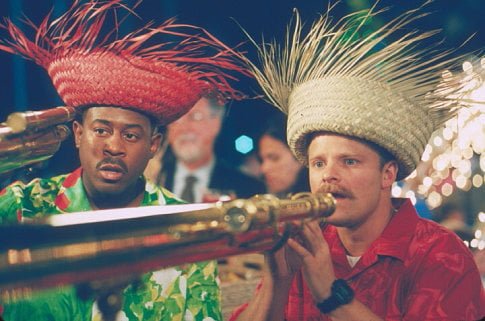 LA cop Hank Rafferty (Steve Zahn) and his partner Charlie (Timothy Busfield) are dispatched to investigate a storage warehouse alarm report. When they get there the two are separated and Charlie comes under fire. Helpless, Hank watches as his partner is gunned down in cold blood by a man with a tattoo on his arm. Earl Montgomery (Martin Lawrence) is a cocky police cadet who earns the ire of his superiors and is thrown out of the academy. When Hank and Earl's paths cross paths, a violent altercation ensues which loses Hank his job. Suddenly, the ex-cop and the cop wannabe are both forced to take jobs with "National Security."

Martin Lawrence ("Black Knight") is Earl Montgomery, a chip-on-his shoulder, racist, obnoxious, hypocritical, half-cocked LAPD trainee who is thrown out of the police academy to land in a warehouse security job. When some serious thieves break in, he finds himself working with colleague Hank Rafferty (Steve Zahn, "Riding in Cars with Boys"), a former LAPD cop Earl unjustifiably had thrown out of the force and into a 6 month jail term on charges of police brutality. This mismatched pair are suddenly burdened with "National Security."

I hereby plead with, grovel to and beg the potential audience of "National Security" to stay away from this movie so that Martin Lawrence's face is never projected onto a movie screen again. There is not one redeeming quality about this actor that warrants his career in Hollywood. Worse, he drags down talented people like Zahn and supporting stars Bill Duke, Colm Feore and even Eric Roberts by association.

Director Dennis Dugan (who at least allowed Zahn to be funny in his woeful "Saving Silverman") and his editor Debra Neil-Fisher ("Saving Silverman") kick off this travesty with the drama of Hank seeing his partner Charlie (Timothy Busfield, TV's "Thirtysomething") shot and killed by a tattooed thief, then introduce Earl mouthing off at Police Academy in a scene meant to be funny before cutting back to Charlie's funeral. Talk about distasteful. Maybe they have it in for Lawrence too.

When Hank spies Earl trying to get keys out of a locked car, he naturally questions the man, who begins spouting every 'woe the Black man' line in the book before becoming belligerent and abusive. Hank pins Earl down for resisting arrest, then Earl begins screaming about being allergic to bee stings when a large bumblebee enters their airspace. A citizen videotapes what appears to be Hank beating Earl, when in reality Hank is swatting at the bee.

Hank's superior, Lieutenant Washington (Bill Duke, "Red Dragon"), is suspicious when Earl's swollen eye is back to normal the next day, but of course screenwriters Jay Scherick and David Ronn ("Serving Sara") choose to let this drop and have Washington turn on the man who just suffered the trauma of losing his partner. Hank goes to jail, where - haha - all the Black inmates now have it in for him.

On his release Hank's hunt for Charlie's killer is what puts him back in Earl's path and Earl just won't leave. This is supposed to be one of those buddy comedies where a dueling duo discover that what each lacks is supplied by the other, but Earl is so supremely irritating that Hank should just shoot him and be done with it. Furthermore, the filmmakers kowtow to Lawrence's ego by having all females, white or black, immediately succumb to his supposed sex appeal. In what alternative reality, I ask? Even more offensive, in one of those 'it's OK for a Black to offer a Black cliche but we'll harangue the white folks for doing it,' Hank's Black girlfriend comments on the large size of Earl's member.

There is exactly one funny gag in "National Security" and it's a telegraphed stunt in which the leads cannot even be seen. Other stunts, involving numerous car chases, crashes and explosions are frequently sloppily edited.

"National Security" ends with Hank reinstated into the LAPD and Earl given his badge. I'll give ten bucks to the first gypsy willing to curse anyone even suggesting a sequel.

"National Security" is actually two separate movies. One is a crime drama that has Hank, his career ruined by lying Earl and a compromising videotape depicting his supposed beating at Hank's hand, trying to find his partner/friend's killer. When he loses his job and career in law enforcement, he is also convicted for the false beating get six-months in prison. When he is released he is forced to take a job that he and Charlie used to make fun of - rent-a-cop for a private security company. While heading to work one night, he hears a police call on his scanner that sounds suspiciously like the call he and Charlie got that fateful night. He heads to the warehouse and finds the same perpetrators hauling out boxes. He also discovers that Earl is the security guard on site.

A shootout ensues, with a couple of the thieves taken down, but the bad guys get away. Hank and Earl take pursuit and, as they close in on the chase, are stopped by the real cops and busted. They tell Hank's former boss, Lt. Washington (Bill Duke), and Detective McDuff (Colm Feore) what they suspect and it falls on deaf ears. It is up to the unlikely partners, Earl and Hank, to figure out the crime and to find Charlie's killers without the help of the law. Shootouts, high-speed chases and a final showdown are what are in store for the rest of "National Security." That's one movie.

The other flick revolves around (and around and around and around) Martin Lawrence. When we first meet Earl Montgomery he is a cadet in the midst of training. Or, so we are to believe. He is a loud mouthed, know-it-all smart ass with an attitude and doesn't listen to his trainers and pays no attention to police procedure. (No wonder he is thrown off the force after cavalierly blowing up a police cruiser while grandstanding to his fellow cadets.) Now unemployed, he attends the three days of training at National Security and takes the job as the night watchman at the warehouse that the bad guys rob. Hank gets the drop on the thieves while Earl is trying to get the drop on a babe from the office. Earl is more annoyed that his good time is interrupted, rather than protect the place from being robbed. (Why anyone would want this man to be a police officer is beyond me.)

Earl's belligerent attitude continues for the rest of the movie with frequent accusations against Hank for being a racist and a Nazi. "You only ask me that because I'm black" is his usual response to a myriad of questions, mostly from Hank. It gets very annoying very quickly, especially since it usually involves a double standard weighted in Earl's favor - he resents white bread Hank having a beautiful black girlfriend, but the interracial thang is OK if he wants to hit on a white chick. This movie grows very annoying and Earl's castigation of the oppressive white society grows tired fast, especially when you consider that the jerk is responsible for his own woes, not Hank or any other white person. I find the characters played by Lawrence, particularly Earl Montgomery, to be offensive and, here, pretty much a jerk. Someone has to explain to me this guy's popularity. (With "National Security" he joins to $20 million paycheck club. Go figure.)

There may have been a real movie here if it stuck with Steve Zahn and his plight to find his partner's killers and to thwart the bad guys. What we get is constructed crap that showcases the unfunny Lawrence and leaves things like a plot dangling in the wind. There is a series of gunfights and car crashes but no sense, at all, to the plot that involves the theft of a special aerospace material that is being stolen for some nebulous, nefarious scheme.

You can tell how I feel about Lawrence and his acting. Not much. As for Steve Zahn, I have always enjoyed his performances whether it is as an escaped convict posing as a children's beauty pageant choreographer in "Happy, Texas" or as Jack Black's goofy sidekick in the otherwise horrible "Saving Silverman." In "National Security" he is the unwilling partner to Lawrence and he mostly looks like he would rather be elsewhere. I felt the same way.

The supporting cast has the likes of Bill Duke, Eric Roberts, Colm Feore and Timothy Busfield (whose character, Charlie, is killed off right away. It must have been a mercy killing. He was the lucky one, I think.) The veteran actors can only be in it for the money because this movie is not going to do anything to advance their careers.

I won't even begin to talk about the tech side of things because, really, who cares?

The audience responded with chuckles and titters and probably reps the reaction of the masses. I, myself, giggled a couple of times but never because of the antics of the star of the film. At 90 minutes, "National Security" is an hour and a half too long.