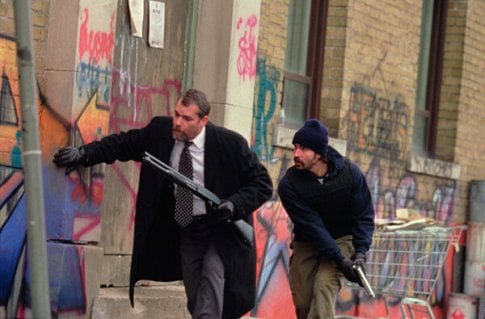 An undercover narcotics cop is murdered but the investigation fails to come up with a single suspect. Two months later another narc officer, Nick Tellis (Jason Patric), is pulled from suspension (following a tragic shooting) and is given another chance make the arrest, close the case and get reinstated. He requests, of his superiors, the help of the dead cop former partner, Henry Oaks (Ray Liotta), a loose cannon who vows he will find the killers, police procedure be damned, in "Narc."

Writer/director Joe Carnahan ("Blood, Guts, Bullets and Octane") puts himself on the map with his stylish sophomore effort. Jason Patric, revisiting terrain he explored in 1991's "Rush," gives the performance of his career, supported by Ray Liotta in a flashier turn.

Carnahan grabs you by the throat with his opener, where undercover narc Tellis chases a drug dealer who takes out a cop with a syringe of bad dope before using a child as a shield. Tellis kills the guy, but also hits a pregnant woman, causing her to lose her unborn child. The scene is cringe-inducing, bloody and pulsating, given a jangly edge by Alex Nepomniashcy's ("Safe") gray-toned, handheld camera work. (He later films a quiet, confessional moment between Tellis and Oak sitting in their car in a long slow pan, capturing different textures and reflections as the camera moves.)

Introspective Tellis, whose wife Audrey (Krista Bridges, "Kids in the Hall: Brain Candy") is threatening to leave him over his return to the streets, is initially wary of hair-trigger Oaks, who became a better cop the day his beloved wife died, but the two fall into a partnership with a mutual goal. When Oaks overacts because Tellis questioned Chalvess's wife Kathryn (Anne Openshaw, "Hardball") without him, cracks begin to appear until the mystery surrounding Chalvess's death is gradually revealed (and will probably not be what you think you've figured out).

Carnahan's adaptation of his earlier short film "Gun Point" is thematically driven by children. Tellis's newborn child is a constant reminder of the one he lost in gun battle. Oak is haunted by the 10 year old girl he found during a drug raid quivering in a closet, prostituted by the dealer Oak goes medieval on. Tellis is obviously connected to the murdered cop, Michael Calvess (Alan van Sprang), through their undercover narcotics work, but Carnahan continues the thread with Tellis's reaction to the dead man's children who he meets in a square green living room with white woodwork trim just like his own.

Patric, who is as strong a lead here playing inward as he was as support in "Your Friends and Neighbors" playing villainous, gives a truly memorable performance. When Oaks crosses major lines in the film's climax, you can see the confusion and denial playing out inside Patric's head. His scenes with his infant are simply amazing - rarely has such rapport with a baby been captured by a professional actor. Patric is able to take a squalling child and comfort it in seconds. Liotta, who gained thirty pounds to look ten years older, presents an air of strong competence tinged with the threat of bottled rage, yet he also project a deep sense of sorrow. He's most entertaining, however, when he reacts with incredulous glee at two outrageous crime scenes - one played for laughs, the other like an ironic play on "Se7en."

Support is top notch across the board, with John Ortiz ("Ali") most notable as Octavio Ruiz, a pantless crack addict who set his girlfriend's hair on fire for giving him the clap who then goes on to profess his love for her. Rapper Busta Rhymes ("Finding Forrester") is strong in that crucial climax as Beery, a chop shopper who may know what happened to Chalvess.

"Narc's" flaws are limited to a couple of indulgences by a young filmmaker. Carnahan imaginatively uses widescreen split screen, which blossoms into four panels, to efficiently portray a day of detective work, but lessens the device's impact when he goes on too long, using three of the four frames to show the same scene from different angles. His climax, which plays out like Michael Madsen's "Stuck in the Middle with You" scene from "Reservoir Dogs" in reverse, also loses some impact in its pacing. Still, "Narc's" strengths far outweigh its weaknesses.

Newcomer helmer/scribe Joe Carnahan makes quite a splash with his second flick (his first was the 1998 no-budget Blood, Guts, Bullets and Octane, but that didn even show up on the movie radar screen when released). Narc is a gritty, in-your-face film that delves into the realm of undercover police work, murder, drugs and corruption. Carnahan doesn pull any punches from the start with the very graphic, action packed opening as Tellis takes off after a particularly heinous drug dealer through the projects in Detroit. The dealer will stop at nothing to make his escape, including stabbing an innocent bystander and grabbing a toddler in a playground as a hostage. When Nick guns down the perp a stray bullet strikes the child pregnant mother and the incident ends with the mother severely injured and her unborn baby dead. Tellis is suspended from the force.

18 months later, as Officer Tellis cools his heels at home taking care of his own 10-month old baby boy, the brutal murder of undercover cop Michael Calvess (Alan Van Sprang) has taken place but the police are unsuccessful in bringing in the killers. They need a fresh pair of eyes from a savvy cop and Nick is selected to continue the investigation, with the promise of reinstatement and a job off of the street. He requests the assistance of Lieutenant Oak, but his superiors are reluctant to let the volatile Henry in on the hunt, although they have little choice. Nick, much to the chagrin of his worried wife Audrey (Krista Bridges), hits the mean streets with Henry and they investigate the increasingly complicated murder case.

Carnahan has created a no-holds-barred crime drama that brings the viewer into the gutters of Detroit illegal drug world. From the opening seconds, as Nick chases a suspected felon, the hyperactive, shaky hand-held camera puts you in the middle of the action. As we follow closely behind Nick pursuit of the perpetrator we have the first clue that this is not a Hollywood crime flick as it places you in the midst of the manic violence. The rough and tumble manner in which Tellis and Oak hunt down Calvess gives Narc the verisimilitude of the sordid drug underworld and the cost it has on the cops on the street.

Jason Patric does a solid, worthy job as Narc anchoring character Nick Tellis. He has the intensity to make his troubled narcotics cop a believable character. Tellis has to interact on a number of levels with his unhappy, scared wife; with his beloved baby; with Henry and his superiors; and, with the slime of the drug underworld. He is convincing on all fronts and gives his best performance to date.

Narc crackles with energy when Ray Liotta shows up and the intensity, often brutal, of his character is scary to behold. Liotta isn given the dimensional depth of character that Patric has to work with but he gives a tough, troubled persona to his Henry Oak. Henry is a powder keg just looking for a match and Liotta plays it with glee.

Supporting characters are sparse and mostly symbolic. Nick wife, Audrey (Bridges), is the voice of reason as she implores Tellis to quit his dangerous job. Some of the smaller roles are well played, especially John Ortiz as Octavio Ruiz, a sleazy character that Henry and Nick come across during the investigation he set his hooker girlfriend wig ablaze (while on her head) for giving him a particularly virulent case if the clap. The scene is both hysterically funny and wincingly gross (without being overtly graphic - much is left to the imagination).

Production quality belies the obvious small budget. The herky-jerky camera work by Alex Nepomniaschy works well in the context of the film, lending a Cops reality TV look to the action. The sleazy underbelly of Detroit is a character unto itself with the depressed sections of the city used to good effect. Production design, particularly a couple of crime scenes and some of the slimy locales, is well represented by Taavo Soodor. I also took note John Gilroy rapid fire editing. Helmer Carnahan directs with a firm hand and unique style, even as he borrows from other films of the genre.

Be warned that the violence of Narc is in your face and may upset some. It is a good showcase for its writer/director Carnahan and he elicits striking performances from his stars.