My Wife Is An Actress (Ma femme est une actrice) 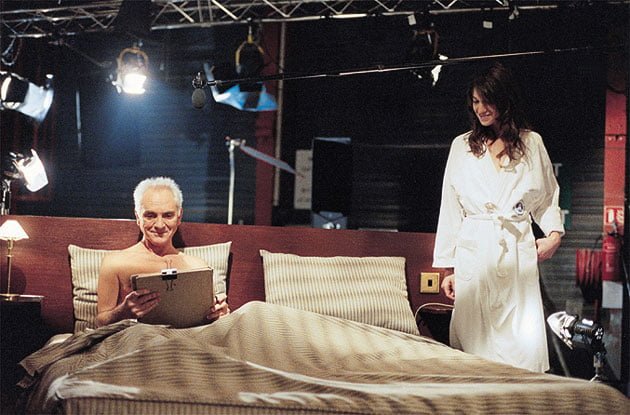 Sportswriter Yvan (writer/director Yvan Attal) has little interest in movies or celebrity, but loves his famous actress wife Charlotte (Attal's wife Charlotte Gainsbourg (1996 "Jane Eyre")). Yvan has never questioned Charlotte's fidelity until a former beau of his sister's plants a seed of doubt in his mind just as his wife's gone to London to make a film with a sexy older costar (Terence Stamp, "The Limey") in "My Wife Is An Actress."

Yvan Attal gives a valentine to his wife with this funny frothy, romantic comedy while giving a serious representation of the dire effects of jealousy on a relationship. Gainsbourg, the daughter of French playboy Serge Gainsbourg and British model/actress Jane Birkin, is luminous in a natural, unselfconscious performance while Attal provides the comedy. The married couple carry their real life spark to the screen.

The film opens with Yvan complaining about the autograph seekers who interrupt their dinner with his newly pregnant sister Nathalie (Noemie Lvovsky) and her husband Vincent (Laurent Bateau). Nathalie is in denial about her obsession with her Jewishness, inviting laughter when she suggests Abraham and Moses as baby names.

Charlotte leaves for London and meets her suave costar John (Terence Stamp, "The Limey"), but maintains her distance from his gentlemanly seduction. Back home, Yvan is shaken by an encounter with a clueless stranger who claims to be 'intrigued' by what's it's like to live with an actress who 'sleeps around,' kisses costars with tongues involved and gets him sexually aroused. Charlotte's reassurances drive Yvan to acting class in order to understand her and he likes the female admiration he receives there.

Reacting to her husband's increasing jealousy, Charlotte gets squeamish about a nude scene, jokingly demanding that the entire crew be nude before she'll disrobe. In the film's most amusing scene, Yvan arrives for an unexpected on set visit to witness Charlotte's director fulfilling her request. Friction escalates, with Yvan's behavior almost driving Charlotte into John's waiting arms.

Attal the filmmaker adroitly captures a marriage and the small slings and arrows that can wreck havoc with a romance. His love for a woman in a 'wacko' profession shines throughout his film with director Attal achieving a beautiful performance from Gainsbourg while letting actor Attal play the fool. Attal's writing is clever, allowing his own character to have an enjoyable experience in the same profession that drives him nuts. His use of phallic imagery is marvelous, with the speeding Eurostar connecting Paris (Yvan) and London (Charlotte) via tunnel and John's gift to Charlotte - an Eiffel tower snow globe. It is unclear why he gives so much screen time to Nathalie and Vincent, except for the rather broad parallel of the bickering of an ultimately happily married couple.

Attal is both sexy and buffoonish in his portrayal of the jealous husband, whether mimicking John in an unflattering way or acting out the blossoming of a flower. Terence Stamp is on the money as the sexy star who clearly lusts for Charlotte but gives her enough space to maintain her distance. His is a subtle seduction. Lvovsky and Bateau are thoroughly believable as an exasperated expectant couple.

Cinematographer Remy Chevrin's fluid camera sharply captures both big city locations and the many, varied interiors. Editor Jennifer Auge keeps things moving at a snappy pace and even shows wit in her cutting when the carry-through of a well-aimed punch turns into a speeding train. Original music by Brad Mehldau provides a cosmopolitan ambience.

"My Wife Is An Actress" is a bilingual charmer, just like the woman who inspired it.