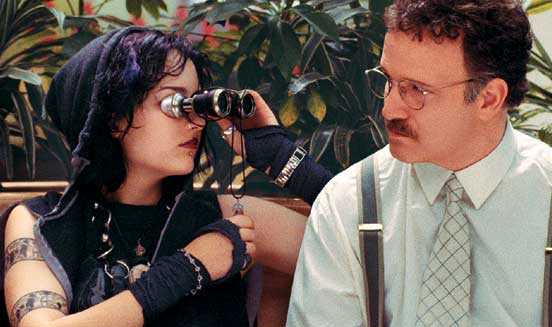 When Jennifer 'call me J' (Leelee Sobieski, "Joy Ride") loses her job at a fringe goth/punk shop, the pierced and tattooed teen heads for the local mall. Amused by watching an older man decorate the window of a men's shop, J asks about his 'Help Wanted' sign. Randall (Albert Brooks, "Out of Sight"), appalled by her appearance, suggests she return without her face jewelry. Both are surprised when she does. J and R fall into an unusual relationship in debuting director Christine Lahti's "My First Mister."

J is the typical, alienated, friendless teen. Even Randall guesses she has a copy of Sylvia Plath's "The Bell Jar" by her bedside (along with plenty of Anne Rice). As the credit's role, J's writing suicidal goth poetry and decorating it with her own blood. Her mom (Carol Kane, "Addams Family Values") is a chirpy, oblivious type remarried to a man J thinks is named Bob (Michael McKean, "Best in Show"). She rebuffs any interest shown to her in school and informs us 'I don't think of myself as a girl or a woman, just the opposite of a boy.' J frequently imagines exaggerated features on the people around her as she zones out on their words, just like 'Ally McBeal.'

Randall, whom J dubs R, is a fifty-ish guy sleepwalking through the routines of life. Yet Randall is a truth teller not afraid to confront J's subversive nature. Believably, they intrigue each other, with J drawn to R's dry sense of humor ('I'm usually home by 9.' 'What happens at 9?' 'I turn into the same person.'). When J spies Randall speaking to a woman of his own age (Mary Kay Place, "Girl, Interrupted") outside the store, she throws a jealous snit by creating an inappropriate window display. After a confrontation over trust, J and R draw closer together, with J revealing her self-mutilation and R confessing his phobic fears.

Leelee Sobieski simply shines as J, coming to life once she's picked her oddball partner. This young girl can really make love beam from her eyes, just as withdrawal and scorn flashed from them in earlier scenes. As she loses her outer goth trappings (she asks R to pick out work clothes for her then yells 'I look like a Republican!' in horror), her carriage becomes more erect, her head held higher. Brooks is almost as good as a man who temporarily takes one foot out of the grave.

But both are let down by Lahti's direction and television writer Jill Franklyn's script. This pair, initially reminiscent of the Thora Birch/Steve Buscemi pairing of "Ghost World," are never allowed to explore the sexual nature of their relationship. Instead, just as things reach that stage, we're thrown into a Lifetime television movie full of every cliche imaginable. The store, where the pecking order gave shape to the relationship, is forgotten. By film's end, family new and old is gathered around a dinner table, presided over by Brooks on one end, and Sobieski, made up by this time to look like, I swear, an Eastern European matriarch. John Goodman, as J's real dad, looks like the Halloween version of a hippy. The film's further undone by an execrable score that doesn't even have the wit to skewer the elevator music it so resembles.

Usually, fine performances can elevate a film, but not this time. Lahti has undermined her stars and delivered dreck.

Jennifer, or "J" as she prefers, is a troubled, Goth-influenced teenager who feels alienated by everyone around - her mother, her teachers and her fellow students. She has no friends, to speak of, but does have the desire to get the heck out of her folks home and into her own apartment. But, that takes money. Cruising the mall by herself, as usual, she sees that a men's clothing store is in need of a storeroom clerk, but the owner (Brooks) thinks her multi-pierced appearance will scare away his customers. She tones down her Goth looks, looses the facial jewelry and Randall (tagged "R" by his new young employee) agrees to give her a shot at the job.

A slow, steadily building relationship ensues as these two friendless folk begin to learn about each other and, unexpectedly, begin to like and then love each other. The years that separate them introduce conflict over the possibility of a May-September love affair and the film seems bent on exploring that romantic possibility. Then, the screenplay by TV writer Jill Franklin takes on an illness-of-the-week, made-for-TV tone that completely diverts from the nicely developing relationship between J and R. At the unexpected juncture when J finds Randall collapsed in the street, we suddenly find out that he has been suffering from a long-term, debilitating illness that is killing him.

With R ensconced in the hospital, J sets off on the road to find his ex-wife of 19 years before. She discovers that the woman was recently killed in a car crash and has a son, Randy (Desmond Harrington), apparently the spawn of Randall. J brings the son home and springs R from the hospital for one last fling with his and her family. The melodramatic turn of the film alters the story from its initial tale of two people finding each other, as friends, across generations into a formulaic tearjerker that would be best left on the small screen.

The changes that Jennifer undergoes during the course of "My First Mister," looks-wise are actually quite amusing. As the troubled Goth chick, she's dresses entirely in black and has a plethora of piercing, mainly on her face and who knows where else. As she undergoes a metamorphosis into a "normal" looking young lady, her costume and hairdo change to make her look like a Jewish matron. Sobieski does her darndest with the awkward role, but the young actress is too burdened with the leaden material. Albert Brooks deals out his patented dry wit throughout and tries his best to save the floundering story but, in the end, the task is too daunting. Supporting cast, including Carol Kane (as J's dim-bulb mom), John Goodman (as Jennifer's hippie, estranged dad) and Mary Kay Place (as R's nurse/friend), does its best but the script, too, buries them with maudlin melodrama. Michael McKean is lost as J's ineffectual stepfather.

Lahti, who earned an Oscar for her short film "Lieberman in Love," benefits from her two stars but offers nothing unique or original on the directing front. There is a static feel to the film that neglects the actors in favor of the contrived story of life, love and death. I had hopes for a breakthrough film by the talented, young Sobieski, but this isn't the movie that is going to be that catalyst. On the strength of the perfs by LeeLee and Albert Brooks, I give "My First Mister' (an awkward title at best) a C-.