My Father, the Genius 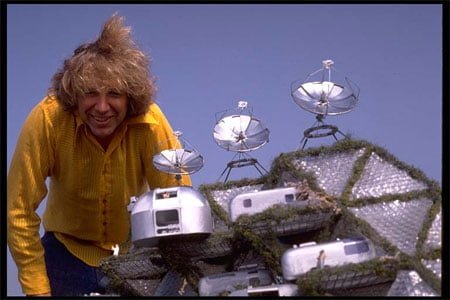 Architectural design visionary Glen Howard Small was a rising star in his chosen field 30-years ago but his huge ego and unwillingness to compromise forced his career down a more austere, less successful path. At age 61, Glen's dreams are unmet and, reflecting on his life, he bequeaths to his daughter Lucia the task of writing his biography. Instead, she proposed that she create a video chronicle about his life and the result is both document and personal examination in "My Father, The Genius."

When famed but failed architect Glen Howard Small drew up his will, he requested that the middle daughter of his first, somewhat estranged, family should write his biography. Once filmmaker Lucia Small, who has extensive production credits with public television projects, was through pondering the request, she countered with an obvious suggestion - that she make a documentary instead. Her work honors her father's request to document his quest to 'save the world through architecture' while also prodding the often painful relationships Small has had with all the women in his life in "My Father, The Genius."

Lucia Small's documentary works on a myriad of levels. It's a profile of an egoistical man who yet may very well be a genius, but who refused to play politics, burning bridges that may have led to his success. It's a history of the changing styles of West Coast architecture over several decades. It's a look at how a man's preoccupation with his work affects a family and how they react to the past in the present. All these angles are beautifully layered together, building a beguiling and intimate portrait of both an individual and the complexities of familial love.

Lucia interviews a wide variety of her fathers' friends and acquaintances, asking their opinions on his self-proclaimed genius. Notably, everyone included in this segment agrees to one level or another with one exception - Lucia's mother. The ex-wife who was left to raise three young girls on her own waves away his ideas as 'Buck Rogers kind of stuff,' and recalls how her observation that doctors are more important than architects once sent Small on a verbal rampage. But Lucia's inclusion of a scholarly definition of experimentation is more likely to sway her viewers towards her subject's assessment.

Small is most proud of the biomorphic biosphere he designed way back in 1965, two decades before a biodome was actually built. He constructs environmentally friendly, curving, sensual buildings which blend with nature. This ecological design stance made him a hugely popular and influential teacher at the Southern California Institute of Architecture (SCI-Arc), which he helped found in 1972. After two decades there, never expecting anything but lifelong tenure, his impolitic nature (he disses Frank Gehry during a televised panel) results in his dismissal. Small was never able to find financial footing after this and we see that his ways have not changed as he attempts to build a pricey home for Rose and Alan Nelson.

Small, who resembles Gary Shandling, admits that his father's sacrifices gave him the freedom of intellectual exploration. That this freedom also made him selfish, and consequently, a preoccupied father is ironic, yet we can see for ourselves that it hasn't stunted his daughters' own endeavors. At least the two eldest appear to have inherited his artistic curiosity.

Lucia describes Sunday outings with dad, who divorced her mother when she was 5, as tagging along on his adventures rather than being treated to excursions designed to delight children. She admits having been jealous of his biosphere, never paying much attention to it until now. Older sister Christine is now a talented painter who admits that she's slightly miffed that Glen now feels closer to Lucia than her. Her kindness in opening her home to him when his finances were nonexistent prove that familiarity, while not necessarily breading contempt, is a tough test of love. Youngest sister Julie, the only sister not shown with dad, is the most conflicted, sneering at his ethics in building homes for the wealthy while regretting that his concepts haven't been universally applied as she describes her ugly environment.

Glen's difficulties with women don't end with his first wife and daughters. Julia chronicles feeling awkward at Glen's attempts to merge his first family with his second. Christine shows distaste at hearing about his love life. Glen goes through his garage and finds an old photograph, detailing which of his students 'gave him a tumble,' then tells his director 'You're gonna bury me with this movie.'

"My Father, The Genius" is an engrossing look at a man whose passion destroyed both his career and his family. Lucia Small's documentary may be the catalyst that set both on a healing path.

From the very beginning of his architectural career, Glen Small has always considered himself a genius of design and innovation. As one of the founders of the prestigious Southern California Institute for Architecture (SCI-Arc) in the 70's his professional life seemed secure with his futuristic concepts, the environmentally friendly Biomorphic Biosphere and the Green Machine, and dedication to "saving the world through architecture." Though he might be a genius at building design, Glen is oblivious to his obligations and responsibilities as a husband, father and human being.

Glen Small, The Genius, left his wife and three young daughters long ago so Lucia was initially, by her own admission, skeptical about the task, even when she convinces Glen to allow his life's chronicle to be made on video instead of in words. What transpires is a frank look at architect Small, his visions, dreams and defeats as he, nearing the end of his career and life, must succumb to the compromises he fought his entire life. There is one insightful sequence where Glen, building a home for a nouveau riche couple, must, in exasperation, defend his stylish design because the wife doesn't understand why she can's see the front door. Glen's professional career reps a meteoric rise followed by a long, steady decline that has become shaky life, to say the least.

Filmmaker Lucia Small seized the opportunity her father's project presented to delve into the impact her father's "genius" inflicted on her, her sisters and mother when he abandoned them all to pursue his dream to save the world through his structures. The interviews with her family and others often describe the impact of the abandonment and this works as a salve that helped heal decades long resentments and sorrows. "My Father, The Genius" is both a documentary about a self-proclaimed genius and his work and a long-needed family catharsis.

Lucia Small walks a very narrow line as she attempts to honestly document the life of her father while examining the impact that her dad's chosen life style had on her, her sisters, her mother, Glen's second wife and girlfriends.