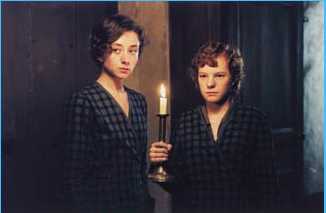 Christine Papin was removed from her beloved aunt's care and put into a convent school with her older sister Emilia at an early age. There, she watched as Emilia, chosen by God, was spirited away. Blaming her mother for the traumas that had befallen her, Christine tried to drive a wedge between mother and young sister Lia, cleaving Lia to her side in escalating paranoia that would transform the duo into "Murderous Maids."

Adapted from the novel "L'Affaire Papin" by director Jean-Pierre Denis and Michhle Halberstadt, "Murderous Maids" presents the 1933 case with the revisionist viewpoint that has been gaining ground in recent years. When the 28 year old Christine and her 21 year old sister Lia butchered their employer and her daughter, many, including the likes of Jean-Paul Satre and Simone de Beauvoir, saw them as champions of a class struggle. It is fact, however, that the two sisters were discovered huddled naked together in bed upstairs from the murder site. Christine's mental state deteriorated rapidly as she howled for her sister from her jail cell, suggesting the germination of a paranoid hysteria born of an incestuous relationship that perhaps had been discovered.

Sylvie Testud ("Beyond Silence") stars as the adult Christine, who performs her duties perfectly but does not tolerate behavior from her employers that would indicate they see themselves as somehow better. When an employer's husband misremembers her name, Christine huffs 'So this is what a maid is - a doormat for others without a name.' Testud displays the growing roar building within by her occasional screams of 'Merde!', or her smashing of an iron stove ring upon a tiled floor. Her goals are to keep Lia by her side and to amass a trousseau for her full of the finery her employers take for granted.

Julie-Marie Parmentier ("The Town Is Quiet") costars as the adult Lia, a rosy-cheeked innocent easily led. When their mother (Isabelle Renauld) takes her along to work in a country house, Lia tells Christine that mother and their employer retire upstairs 'to rest' every afternoon. Disgusted, Christine praises her sister to Madame Lancelin until the woman inquires whether she might be available to work in the household as well. Parmentier shows childish confusion at the tug-of-war between her mother and sister and their dueling trousseaus, but the adoration of her gaze is stronger when cast at Testud.

Ensconced in the Lancelins' attic, Christine's pettings of sister Lia cross a sexual line. 'Is this wrong?' asks Lia. 'No sweetheart, it would be worse to be a whore,' answers Christine. And so they begin to shut out the world for their little piece of heaven. Ironically, the Lancelin household is shown to be the most kindly and progressive, but the filmmakers establish an air of religious repression that cloak all classes in that time and place.

Denis' claustrophobic film evokes the sinister European wartime era feel of "Docteur Petiot" where close houses hide dark secrets, and the downtrodden dankness of Claude Chabrol's biopic of Marie Latour ("The Story of Women"), who was executed for performing abortions during wartime. Denis and Halberstadt lay their groundwork confusingly, hinting that Christine may have been abused by her father. It takes a while to sort out characters and relationships, with the actress cast as Emilia as a child resembling Testud, while the one who plays Christine does not. Once the adult actresses take over, footing is regained and the escalating sense of doom Denis attains recalls Chabrol's modern set "La Ceremonie," where another set of women, one stronger and crazier, lash out at a bourgeois family. Director of photography Jean Marc Fabre shoots daytime duties in a steely blue light while sisterly evenings are have the glow of candlelight.

Testud and Parmentier are totally different and perfectly paired. Their interplay is fascinating to watch with Testud creating a pet of the uncorrupted sweet child she will totally corrupt. When the murder happens, shocking as it is (Christine gouges out the mother's eyes while the daughter is savagely hacked with a knife), it is also inevitable.

In 1933, two young sisters, Christine and Lea Papin, employed as maids in an affluent provincial household in Le Mans, France, make national headlines when they are convicted of the brutal murder of the mistress of the household and her daughter. Helmer/co-scribe Jean-Pierre Denis examines the events that may have led to the commitment of this heinous crime in the captivating period drama, "Murderous Maids."

Christine (Sylvie Testud) and Lea (Julie-Marie Parmentier) grew up in the strict environment of a convent where their mother placed them and their sister Emilie to be raised by the nuns. Emilie remains at the nunnery, but Christine and Lea enter the work force as domestic servants. Elder Christine has problems with her lot in life and has trouble keeping a job. She eventually lands a position with the Lancelin family in Le Mans and convinces them to also hire young Lea. The two domestics worked for the prominent lawyer and his wife for six-years without incident. Then, one fateful night, something snaps in the mind of Christine and one of the most notorious pair of murders in French history takes place in the quiet house six hours from Paris.

Director Denis, with co-writer Michele Halberstadt, has created a unique, gripping look at the much-chronicled double murder that has been the subject of countless books, films and articles that, to this day, fascinate the public. The helmer builds a subtle, steady drama that, because of the title and, especially, the performances of the two leads, kept me on the edge of my seat in anticipation of the subject mayhem. But don't let the promise of murder lead you to think that this is the sole draw for "Murderous Maids."

We meet the Papin sister in their younger years. With their father away at war, the girls are forced to take up residence at a local convent. This abandonment by their mother causes Christine to build resentment for her mere that will shape her life and plant the seeds for the future violence that will envelop Christine and Lea to catastrophic results. The story told lends the hindsight of modern psychology to the events that paint a plausible picture of severe mental illness in the dominant Christine. Helmer Denis builds a case to explain why Christine would suddenly strike out in such a deadly manner - her mother's neglect, self-esteem problems, humiliation over her lowly position and the possibility of paranoid schizophrenia.

Sylvie Testud and Julie Marie Parmentier are superb as the Papin Sisters. Testud, as Christine, is the strong-willed soeur who has serious problems with her lot and has a hard time curbing her venom before her employers. When she gets her little sister a job with her in the Lancelin home things seem to be on an even keel but, as resentment builds in Christine's troubled mind, the inevitable happens. Testud deftly walks the line between sanity and madness in her portrayal of the murderess-to-be.

Parmentier has a tough role as the naïve, hopeful Lea and the actress does a solid job in portraying the sweet, not-to-bright younger sister. Lea's loyalty to Christine remains until the bitter end when they are sentenced and learn that they will not, as they had hoped, stay together forever. Testud and Parmentier capture the screen and keep a firm hold on your attention to the finale.

"Murderous Maids" pulls no punches in its depiction of the lives of the Papin sister and the events that led to their notorious rise to infamy in 1930's France. The video quality is a distraction at times but not an insurmountable one.