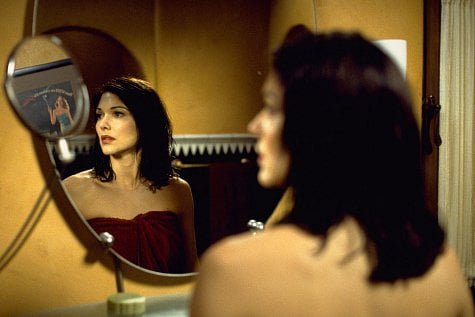 A dark haired woman (Laura Elena Harring, "Little Nicky") is ordered out of a car at gunpoint just before it's hit head on by a bunch of joyriding teens. Dazed, she climbs from the wreck and makes her way to a Hollywood apartment being vacated by an older woman.

A perky blond (Naomi Watts, "Dangerous Beauty") arrives to stay at her Aunt Ruth's vacant place with dreams of movie stardom dancing in her head. Betty finds the dark haired woman in Aunt Ruth's shower, but 'Rita' doesn't remember who she is or why her purse is stuffed with hundred dollar bills and a blue key. The two set out to discover what led to her accident on "Mulholland Drive."

After the linear "The Straight Story," writer/director David Lynch is back in the weird world of nightmares with this cautionary tale of dashed dreams and lost love. Lynch fans should rejoice as "Mulholland Drive" is his best film since "Blue Velvet."

That film is immediately recalled with the light/dark parallels of Betty and Rita to Laura Dern and Isabella Rossellini's characters. The twist here is that we're in 'Betty's' dream, getting events filtered through her own idea of her good, talented self. 'I just came from Deep River, Ontario and now I'm in this dream place,' Betty chirps at LAX. The real woman we finally meet has a far darker soul, besmirched by her experiences in tinseltown.

One person having a torturous day in her REM state is Adam (Justin Theroux, "American Psycho"), a director with a penchant for Fellini-esque eyewear. He's being pressured by the mysterious Castigliane brothers (Dan Hedaya and composer Angelo Badalementi) to cast an unknown woman, Camille Rhodes, in his movie. After bashing their limo with a golf club, he heads home to discover his wife in bed with the pool man. He takes residence in a fleabag hotel and gets word that his bank has notified the manager that his credit's no good. Then his assistant tells him he's to meet 'The Cowboy' later that night. This Robert-Blake like character's message? When Camille auditions, he's to say 'That's the girl.'

Meanwhile, Betty's audition is so successful a visiting casting agent tries to steel her away and steer her towards Adam, but Betty, having promised to meet Rita, with whom she's fallen in love, nervously flees. Rita thinks she might be Diane Selwyn and the two trace Diane's apartment only to find that Rita is not Diane and the dead body inside the apartment very well could be.

Trademark Lynch touches abound, from the opening car driving along a median strip on a dark road and subsequent car accident, to kitschy diners (Winkie's here, complete with ghoul in its back alley) and red draped rooms inhabitted by Mr. Roque (Michael J. Anderson, "Twin Peaks'" Man From Another Place). The Club Silencio, where all is illusion and everything's on tape (shades of "Lost Highway"), features a singer belting out a Spanish rendition of Roy Orbison's "Crying" acappella. The industrial soundscapes and Badalementi score provide the signature Lynch sound while cinematographer Peter Deming's ("Lost Highway) camera creeps around corners towards sinister doorways and swoops into the black hole of a blue box.

Naomi Watts ably plays both the light and dark sides of a woman in love trying to survive in L.A. (her audition scene's a doozy). Harring does well playing the sympathetic mystery woman of the dream and the harder beauty of reality. Theroux adds sardonic humor. The legendary Ann Miller is Coco in both worlds. Watch for an uncreditted cameo by Lee Grant as Lorraine.

In June of 1999, Jack Nicholson was in a car accident with an initially unidentified 29 year old woman on Mulholland Drive. She turned out to be Lara Flynn Boyle, the 'good' friend of "Twin Peaks'" doomed Laura Palmer. (Jack also had a road rage incident with a golf club.) Is this what David Lynch's dreams are made of? Whatever the inspiration, "Mulholland Drive" is Lynch at the top of his game.

Dreams, bizarre characters, sexy and troubled women, a mystical black box and its blue key and a sinister air drive the bizarre drama as director/writer David Lynch takes us into his own unique view of the world with “Mulholland Drive.” Naomi Watts stars as a squeaky-clean, fresh-faced actress named Betty Elms, straight out of the boondocks of Canada, who comes to Hollywood to find fame and fortune but, instead meets, in her aunt’s shower, a mysterious, beautiful woman, Rita (Laura Harring). Rita has a pocketbook stuffed with hundred-dollar bills and no memory after being in a car accident on the titular road.

Betty offers to help Rita learn about herself and regain her memory. Meanwhile, Fellini-looking film director Adam (Justin Theroux) is being coerced by his backers, the Castigliane brothers (Dan Hedaya and “Mulholland Drive” composer Angelo Badalementi), to put their chose of actress as the star of the helmer’s pic. Adam refuses, trashes the brothers’ car then hides out in a Hollywood fleabag hotel, only to find out that his assets are frozen.

Betty is awakened from sleep by a strange and mysterious guy called The Cowboy only to learn that the her meteoric success is only a dream and she must cope with the reality of her situation – out of work and without prospect, except to use what God gave her to try and get ahead. Rita, it turns out, is the star and she has the attention of director Adam, now back in control.

David Lynch, as a filmmaker, is most definitely an acquired taste. Which explains why, for the first time I can recall in quite a while, years maybe, people walked out of the screening I attended. If not forewarned, the average movie bear would be hard-pressed to see just what it is about Lynch that causes him to have such a dedicated following. The director’s style, since he broke ground with “Eraserhead,” is to use sparse dialog, slow almost languid camera work and long bouts of quietude throughout his films, coupled with his offbeat storylines and characters. “Mulholland Drive” is no exception.

Be prepared, when you sit down to watch “Mulholland Drive” for the director’s unique perspective on telling a story. He treats things that are good and nice as superficial and destined to be replaced by those things that rise up from the sordid underbelly of the human psyche. His main characters represent a duality of good/bad, but almost invariably, the bad comes to prominence – see the director’s nightmarish “Blue Velvet” and the near-incomprehensible but enthralling “Lost Highway.” While “Mulholland Drive” doesn’t have the exquisitely evil character of the other films, Dennis Hopper and Robert Blake, respectively, there is the patented Lynchian undertone of the sinister side of man within and throughout the film.

Acting, like the dialogue, is sparse as the thesps deliver their lines in the slow, deliberate manner what couples with the director’s laconic method of telling a story. This tale is almost linear in nature, somewhat of a departure from the episodic sequencing he normally exhibits. Lynch collaborator, cinematographer Peter Demming, provides the requisite moody camera work to carry forth the story and make the film look interesting. His close-up camerawork of the attractive female leads has a texture and feel that brings out their beauty. Production designer Jack Fisk is thoroughly in sync with the director and gives a life to the set design that complements the film. A keynote of the flick is a fabulous musical rendition of a foreign language version of the great Roy Orbison song, “Crying,” that blew me away. The oft-eerie score, by Badalementi, helps maintain the sinister undertone that Lynch is striving for.

If you’re headed out to the theater and are looking for a bit of mindless Hollywood entertainment, do NOT buy tickets for “Mulholland Drive.” But, if you are a fan of David Lynch or are up for a little experimentation at the movies (which I encourage), then this will, at the very least, have you thinking. This one is for the brave at heart (it is 21/2 hours long).