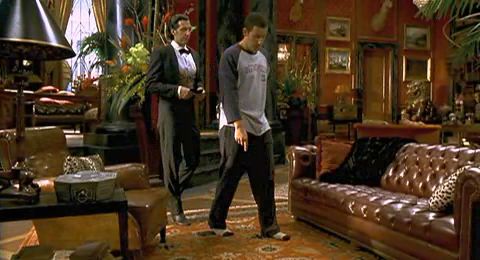 The Sandler team which last delivered the execrable "Little Nicky" attempt to recapture the sweet Sandler of "The Wedding Singer" by remaking Frank Capra's 1936 Gary Cooper comedy, "Mr. Deeds Goes To Town" and succeed to varying degrees. The film does have three major drawbacks, but I'll get to those later.

Writer Tim Herlihy updates the classic by making the poetry writing Deeds an aspiring greeting card author, but maintains the basic outline of the original film. Once in NYC, Deeds is appreciative of the chutzpah shown by a tabloid photographer, who gets his shot then leaps off a rooftop with hang gliding equipment. But the media will harass and abuse him, particularly in the form of Babe Bennett (Winona Ryder, "Autumn in New York"), an "Inside Access" producer who poses as a school nurse from 'Winchestertonfieldville' Iowa to capture Deeds' heart while broadcasting her questionably obtained footage of his mishaps and misrepresented heroics around the city.

Sandler is engaging as Deeds, exuding the warmth, if less vulnerability, of his wedding singer. The man's comfortable in his skin, enjoys performing (doing a fun cover of Bowie's "Major Tom") and has comic timing. He generously lets supporting star John Turturro, as Deeds' Spanish butler Emilio, steal every scene he's in. Turturro is fabulously funny and over the top as a 'very sneaky' butler who excels in the art of impossible disappearing/reappearing acts. Gallagher does a full on corporate sleaze offset by Avari's comic appreciation of the small town boy. Sandler regular Allen Covert gets knocked around as a hapless media producer and Jared Harris is Gallagher's media equivalent as Babe's boss. Rob Schneider makes his token appearance to catch a cat flung from a burning building, but does not utter his hitherto signature line ('You can do it'). Tennis star John McEnroe is awkward but good natured in an extended cameo while the Reverend Al Sharpton is a rhyming natural as himself.

The small town folk are also well represented. Conchata Ferrell is the maternal presence of Deeds Pizza and Peter Dante is the dumber than dirt low-brow comic relief. Customers include Steve Buscemi doing a Marty Feldman impersonation as Crazy Eyes, who is delighted by custom pizzas topped with oreos and jelly beans.

The production is professionally acquitted with NYC spaces lush and grand while Milford Connecticut's ready made small town look stands in for Sandler's home state.

The romantic comedy is only firing on half its cylinders, though, as Winona Ryder is badly miscast and flounders miserably. As enjoyable as Sandler is in this film, he can't generate any chemistry with the actress. Ryder plays Bennett like Pepe le Pew's feline love interest. Secondly, although Cooper threw a few punches at NYC snobs, the excessive cartoon violence in the remake is wildly out of balance with its otherwise sweet tone. Thirdly, two overdubs referring to the 'honor' of being in NY and working with their firemen are obvious and leave the odor of pandering.

On the whole, though, "Mr. Deeds" delivers more laughs than groans. Sandler fans (and I count myself among them) should be delighted.

Longfellow Deeds (Adam Sandler) is the happy owner of a pizza shop in Mandrake Falls, New Hampshire. When an 82-year old billionaire, his uncle, dies atop Mt. Everest, the small-town boy suddenly finds himself $40 billion richer, the owner of the New York Jets, a mega-media news empire and a kickass private jet. Will this vast wealth spoil the sweet and loving nature of "just call me Deeds" or will he change the world in "Mr. Deeds"?

The screenplay, by Tim Herlihy, uses the original Frank Capra story (from Robert Riskin's script) as a springboard to put an original, new millennium (read Adam Sandler) spin on the rags-to-riches tale. Longfellow Deeds is a childlike character coming from the safety and innocence Mandrake Falls, where a man is measured by his friends and his standing in community, not his pocketbook. When he learns that he has just inherited $40 billion from his late uncle Preston, Deeds gives an "uh, OK" response like its an everyday occurrence. The town folk, too, mirror his reaction, unimpressed by the vast amount of money. But, this is a fish out of water story and the small hometown-ness of Deeds helps set things up for his journey to the Big Apple. Who is going to experience the biggest change - Deeds or, the people of New York? I'll leave that for you to guess or find out for yourself.

Deeds, suddenly thrust into the media limelight as the world's newest multibillionaire, becomes the target of the inevitable yellow-journalism that wants sensation for its stories, not fact. Sleazoid TV news producer Babe Bennett sees the arrival of Deeds in New York as her chance to prove herself worthy of a job at "60 Minutes." But, as Babe digs up the dirt, she falls for Deeds and is appalled when her unscrupulous boss, Mac McGrath (Jared Harris) the star of the TV tabloid "Inside Access," misrepresents the antics of the billionaire following a night on the town with tennis master John McEnroe. Deeds will, of course, clear his good name and do the right thing with his fortune. And, fall in love wit Babe.

Sandler should think about moving on from the big kid character that has become his trademark, although he does it well and is usually amusing. As Longfellow Deeds ("just call me Deeds" he admonishes everyone from the elevator man to the mayor), Sandler had the opportunity to turn this into something akin to Gary Cooper's rich, layered take on good-natured, greeting card-writing guy. The title character is charming and funny, for sure, but Sandler plays it just like all of his other films, with an amiability akin to "The Wedding Singer." Someday I would like to see Sandler do a romantic comedy sans the slapstick.

The costar and love interest in "Mr. Deeds," Winona Ryder in the reprisal of the character of newshound Babe Bennett (Jean Arthur was absolutely terrific in the Capra work), is the film's major weakness. The actress is wooden and conveys no sense of comic timing in a performance that is, at times, painful to watch, especially opposite the relaxed comedy of Sandler. Fortunately, there are several supporting performances that help temper things, especially with John Turturro's very funny perf as Deeds' loyal butler Emilio Lopez. His ability to suddenly appear from nowhere (and disappear as well) is carried through the film effectively and with a laugh each time.

Peter Gallagher is well cast as the conniving, money grubbing corporate honcho, Chuck Cedar, out to make a name for himself, and make a bundle, by selling out Preston Blake's (Harve Presnell) media empire to a French conglomerate. He plays the mean-spirited foil to the amiable Deeds with just the right arrogance and selfishness. Erick Avari as Cedar's associate Cecil Anderson, who takes a liking to the likable hometown boy, gives an enjoyable performance (and has one melodious voice). Jared Harris is suitably slimy as the head of the tabloid news TV program, "Inside Access," that dogs Deeds in an effort to prove that he is a fake and not the lovable guy he really is. Conchata Ferrell, an underutilized character actor, gets a chance to shine in her brief appearance as Deeds' loyal friend and senior employee at the pizza shop. Steve Buscemi ads a goofy comic touch as town denizen Weird Eyes - you'll get it when you see him.

As you can tell from the preview trailer for "Mr. Deeds" violent slapstick is used with liberal helpings. Butler Emilio's (John Turturro) hammers away on Deeds' frostbite blackened foot with a fireplace poker (at his boss's request it should be said); Longfellow takes down a "mugger" and brutally beats the guy (but doesn't call a cop for literary license reasons); after being made the butt of a joke by a group of snobs in a posh restaurant, Deeds rebuke is first verbal, then violent, as he assaults the hecklers (this bit is a remake of the same scene in Capra's 1936 classic which was adapted from Clarence Buddington Kelland's story "Opera Hat"). For a film whose main character epitomizes goodness and kindness, there is an awful lot of violence in the course of "Mr. Deeds."

Production designer Perry Andelin Blake does an outstanding job in creating the small town look and feel of Mandrake Falls (with New Milford, Connecticut standing in as Deeds' mythical home town). The contrast when Deeds comes to Manhattan is striking. The opulence of the new billionaire's NYC digs is displayed nicely, as when Deeds uses cavernous home as an echo chamber or uses his uncle's favorite water bubbler - which dispenses Hawaiian Punch.

The affable Sandler has proved that he is a moneymaking comic star that can get the audience in the theater in droves. "Mr. Deeds" is suitable summer entertainment that offers escapism without requiring a great deal of thought. The film wears its good-natured amiability on its sleeve and benefits from Sandler and his good supporting cast (except, I'm sorry, Winona) and the happily ever after ending. It's not a Capra-esque classic but is, in its own right, mildly enjoyable entertainment.