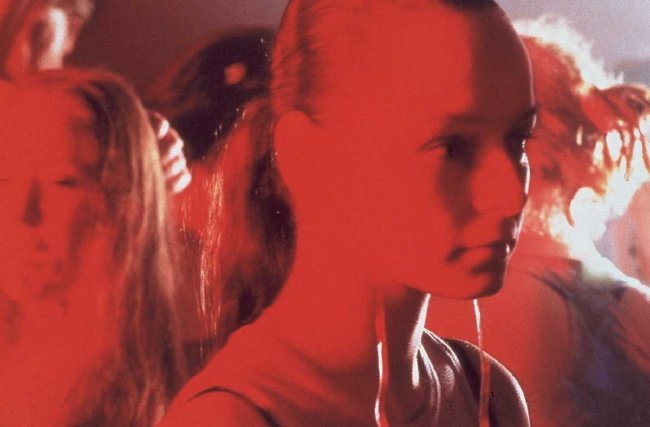 On Christmas morning, a twenty-one year-old small town Scottish girl awakens to find her boyfriend a suicide beneath the Christmas tree and 'READ ME' blinking on his computer monitor. This horrifying event sparks a strange, ultimately liberating odyssey for "Morvern Callar."

The quietly observant, childlike Morvern, given an alien luminosity by Samantha Morton ("Sweet and Lowdown"), is one of contemporary fiction's strangest characters. Director Lynne Ramsay ("Ratcatcher"), who also adapted Alan Warner's novel with Liana Dognini, has created a unique tone poem showcasing some formidable acting by Morton, yet neither is quite capable of drawing us into Morvern's head, keeping us at arm's length from the central character. Still, Morvern's journey is one well worth taking.

After reading her boyfriend's suicide note, which advises on a bank account for funeral expenses and instructions to send his first novel to a particular London publisher, Morvern opens her Christmas presents (including a mix tape featuring Can and Aphex Twin, used prominently throughout the film) then goes out partying with her best friend Lanna (Glasgow hairdresser Kathleen McDermott, in her film debut). When questioned, she simply says her boyfriend's left her. She returns to her job at the local supermarket (in a dazzlingly surreal montage set to Lee Hazlewood and Nancy Sinatra's "Some Velvet Morning"), then decides to dispose of the body and use the bank account for a trip to Spain with Lanna.

While Lanna's happy drinking and drugging in an anonymous resort catering to fellow Brits acting like they're on Spring Break, Morvern's still searching. She connects with one young man (Raife Patrick Burchell) who has just learned of the death of his mother by getting him to joyously jump up and down on his bed, but the constant druggy haze and disco lights recall the booze and Christmas lights of home, so Morvern drags Lanna out into the countryside. This road trip breaks down the friendship and Lanna returns home. In a sort of epiphany, Morvern signs her name to her boyfriend's novel, drawing London publishers to southern Spain to quote a large advance to the budding genius.

Morton has proven herself an accomplished actress at a very young age, and she imbues her wide-eyed wanderings and chain-smoking contemplations with a vitality that fascinates. There's no one better at embodying joy on the movie screen. The actress and her director frustrate the audience, though, by not allowing us to see what makes Morvern tick. She's a mysterious being who finds freedom via an extraordinarily unusual, seemingly emotionally removed path. McDermott, cast by an agent who noticed her on a Glasgow street, is disarmingly natural, every bit as down to earth as Morvern is ethereal.

Ramsay's first film also featured a central character covering up a death, but relied on unrelenting bleakness to achieve an emotional effect. "Morvern Callar," although flawed, is a greater artistic achievement, a road movie of the psyche. Cinematographer Alwin H. Kuchler ("Ratcatcher," "The Claim") gives the Western Scottish port of Oban (unnamed in the film) a realistic grayish gloom, then achieves a hyper-real quality for sun-drenched Spain, just as "Ratcatcher's" young protagonist's worlds of Glasgow slum were contrasted against the dreamlike new home set amidst a field of yellow.

"Morvern Callar" may be an unknowable being, but she's a bewitching travelling companion.

A man lies in a pool of blood on the floor. A girl lies sleeping nearby. The decorations and in the apartment tell that it is Christmas but it looks like we're about to enter a modern tragedy. When the young woman realizes that her boyfriend committed suicide she blithely goes about her day-by-day existence, but then she is "Morvern Callar."

Director Lynne Ramsay, with her co-scripter Liana Dognini, has created a terrifically unique title character. Morvern (Samantha Morton) is a self-centered, self-indulgent young woman but she is so earnest and forthright you may not like her but you have to admire her chutzpah. With her dead boyfriend lying dead by the Christmas tree she calmly opens her presents, reads the suicide note and checks out his biggest gift of all - a completed novel on disk that he wants her to submit to a publisher. She dresses and heads off to work in a supermarket, stocking shelves and mopping up until it is time to go out on the town with her best friend Lanna (newcomer Kathleen McDermott). As far as Lanna and everyone else are concerned "he" left Morvern and then left town. No one questions it.

Morvern continues living with the corpse until things start to get ripe. She dumps the body into an ice filled bathtub until she can figure out how to get rid of it. Like everything else about Ms. Callar, she is practical and turns, unflinchingly, to the gruesome task at hand. After the disposal is done, she takes her boyfriend's bankcard and buys her and Lanna a package tour to sunny Spain. Before they leave, she changes the author's name on the novel to her own and sends it off to a publisher.

As the Spanish countryside unfolds for them it becomes evident that there are cracks beginning to form in the girls' friendship. Lanna is content with partying around the resort while Morvern is plotting out her future, especially when the publisher eagerly contacts her with an offer. As Lanna returns home with little more than some snaps from the trip, Morvern is being cajoled, wined and dined by the publishers with an offer for more money than she could have dreamed just a short while before.

What makes "Morvern Callar" work at all is due to the sheer talent of Samantha Morton. Morvern, in another actor's hand, could have been a despicably selfish creature that you would disdain rather than admire. Morton makes Callar into a person that you must watch, if only to try to figure out what makes her tick. She is so matter-of-fact and assured in handling her boyfriend's tragic suicide. Sure, she'd like to have him back but things are the way they are and one must cope in whatever way is required. There is a ruthless quality to Morvern that makes her someone you do not lightly cross.

Another treat in "Morvern Callar" is the debut of Kathleen McDermott as Lanna. This young non-actor has a fresh, likable and natural quality that is a perfect foil for Morvern. To watch McDermott you would think that she had years of experience acting rather than someone found as a trainee barber in Glasgow. This young lady, if her out-of-the-gate debut is any indication, is going to make.

Techs are decent with the remote seaport town shown in dark, bleak hues of blue and black that capture the drabness of Scottish urban life. When the story moves to Spain it becomes awash in warm colors and bright sunlight that feels like escape from another world.

"Morvern Callar" may be an acquired taste for many but Samantha Morton and Kathleen McDermott are worth the price of admission.