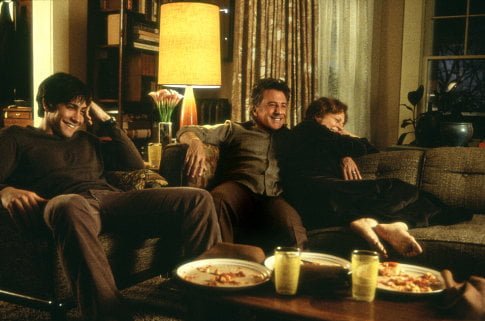 Joe Nast (Jake Gyllenhaal, "The Good Girl") is in a suspended state. Sideswiped by the death of his fiance Diana, the only child of Ben (Dustin Hoffman) and Jo Jo (Susan Sarandon) Floss, Joe has now become a surrogate son to them, letting their needs overshadow his.  But Joe's got a painful secret that becomes more and more difficult to keep once he meets Bertie (Ellen Pompeo) in writer/director Brad Silberling's ("City of Angels") "Moonlight Mile."

Silberling's story is strikingly similar to last year's "In the Bedroom." An only child is killed in the midst of a domestic dispute and the child's lover and parents are left to grieve and deal with a court trial in a small New England town (the fictional town of Cape Ann, actually Gloucester and Marblehead, MA). But Silberling's tale evolved from personal experience (then girlfriend, actress Rebecca Schaeffer of TV's "My Sister Sam," was murdered in 1989) and his look at grief is surprisingly tinged with humor.

Silberling stuffs a lot into his screenplay - the odd ways people react to grief, the things that keep a seemingly disparate couple together (the Flosses are reflected more extremely in the husband who attempted to kill the wife who decides to testify for his defense), the difficult, but ultimately healing nature of truth and even a death penalty debate.

On the day of Diana's funeral, Jo Jo rants against well meaning people, Ben compulsively cleans (in addition to his lifelong Pavlovian response to ringing telephones), Joe hyperventilates in response to cliches from strangers and Nixon, Joe and Diana's retriever, projectile vomits. In the days after, Jo Jo has writer's block while Ben throws himself into the commercial real estate business that kept him from knowing his daughter better. Joe drifts until he meets Bertie, Cape Ann's lone postal clerk, while intercepting his own wedding invitations.

Silberling's attempt to symbolically link Joe and Bertie through a set of missing partners and a real estate deal is handled awkwardly and unbelievably and a try for whimsy via nods to Italy feels forced, but his dialogue is very true, particularly in the mouths of his two main female characters.

This is Sarandon's film. She becomes Jo Jo, a mother embodying the spirit of a dead daughter, a rebel, a wit, a wag. Jo Jo's speech to Joe about the meaning of home is the cornerstone of the entire film. Newcomer Pompeo makes a powerful debut with the conflicted strong/frail, tomboy/sylph Bertie, who Silberling's given an odd way of expressing herself ('Snot check' she demands of Joe after an emotional moment). Hoffman plays Ben as a fish out of water when he's not working, but his ticks show his acting. There's a little bit of "Rain Man" in Ben's neuroses. Gyllenhaal, whose character is kept in limbo too long by Silberling, gives a mushy performance, playing Joe as a boy, not a man. Notable support comes from Holly Hunter, as the Floss' straight shooting lawyer and Aleksia Landeau, marvelously awful as a vulture who sweeps in on her dead friend's leavings.

Production Designer Missy Stewart ("Good Will Hunting") and Costume Designer Mary Zophres ("The Man Who Wasn't There") get early 1970's middle class coastal Massachusetts down with the beauty of autumn contrasted against the golds and avocados of the decade. It's refreshing to see interiors designed that look like places real people live and work. The soundtrack reflects both the time and the film's themes with such tunes as "I Want to Take You Higher," "I Hear You Knocking" and the titular tune.

"Moonlight Mile" is like a defanged "In the Bedroom," but it finds emotional truth amidst its gimmickry.

Director Brad Silberling ("City of Angels") takes real life tragedy and turns it into a catharsis in his story of a young man, Joe Nast (Jake Gyllenhaal), who lost his fiancée to violence just before their wedding in the small town of Cape Anne, Massachusetts. Joe, since the murder, has stayed with the dead girl's parents, Ben and JoJo Floss (Dustin Hoffman and Susan Sarandon), and is trying to be the dutiful, bereaved husband-to-be and loyal almost son-in-law in "Moonlight Mile."

The story mixes comedy in the midst of its tragedy as Joe tries to be all things to all of those around him - especially Ben and JoJo. Ben, with an enthusiasm that masks his despair, makes Joe a partner in his commercial real estate business. JoJo turns to the young man as the only link left to her beloved daughter. Joe, though, harbors a secret that he has kept from the Flosses, one that would undoubtedly change their feelings for him. As he struggles with his conscience, Ben insists that he go to the local post office and retrieve the wedding invitations that were sent before the killing. There he meets attractive tomboy Bertie (Ellen Pompeo) who, besides schlepping the town's mail around, also works at the bar owned by her boyfriend who has been MIA in Vietnam for three long years.

While the screenplay, by Silberling, tries to tug at the heartstrings with its story of tragic death and grief, it also melds humor into the mix but in an uneven and sometimes obvious way. Joe, as we come to learn, is really an immature young man who is unable to stand by the decisions that he has made regarding his life. He can't confront the Flosses with his inner truths and is unable to overcome his little boy sensibilities. When he meets and falls for Bertie he is unable to broach the subject with his almost in-laws. Unfortunately, Gyllenhaal's Joe never rises above his two dimensional character. The film benefits from the chemistry that develops between the young actor and newcomer Pompeo.

Where "Moonlight Mile" draws an ace is in the performances of its veteran actors. Susan Sarandon gives a convincing, strong spin on her role as JoJo. She is the anchor of the marriage with Ben and is a durable foil for her husband, who obsesses over everything as he tries to hide his pain and confusion at their loss. Ben, aptly named as he represents what his same named character from "The Graduate" could have become, overcompensates as he uses Joe to smother the overwhelming sense of loss. Holly Hunter, as Mona Camp, does well in the small role as the attorney who is trying to bring some justice as she prosecutes the killer of the Floss's daughter. Ellen Pompeo makes a strong debut as the love interest and helps put some spine in Joe.

The script tries too hard to do too many things, including the trial of the killer that feels tacked on to the family drama. Silberling tries to pack Joe's torment and confusion, the grief of the parents, the romance with Bertie, her coping with the long time, unrequited loss of her boyfriend, and Ben's failing business into a package that is too neat and sometimes forced. Although the story is set in 1973, the period feel is almost nonexistent. The talents of the actors helps "Moonlight Mile" rise above its heart-on-its-sleeve writing.