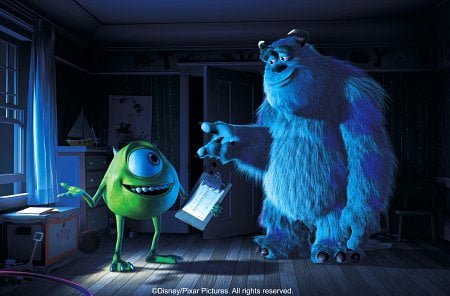 Every kid knows that, late at night while they are asleep, there are monsters lurking in the dark recesses of the closet just waiting to spring out and scare the heck of a little boy or girl. But, did you ever wonder about what scares the monsters? Walt Disney Studios and Pixar Animation tell us in "Monsters, Inc."

The CEO of Monsters, Inc., Henry J. Waternoose (James Coburn, "Afflicted"), is struggling to cope with the city of Monstropolis' energy crisis. The screams collected from children around the world by the monsters he methodically unleashes from their closets are dropping in numbers - kids just don't scare as easily these days. Meanwhile lead scarer Sully (John Goodman) and his associate Mike Wazowski (Billy Crystal) seem assured of taking the all time scream record over scheming Randall (Steve Buscemi, "Ghost World"), when Sully inadvertently lets a young human girl, toxic to monsters, loose in "Monsters, Inc."

With this film, Pixar ("Tin Toy," "Toy Story," "A Bug's Life") should officially be declared a national treasure. "Monsters, Inc." is not only better than "Shrek," it's one of the best movies of the year. It's hard to believe the much anticipated "Harry Potter and the Sorcerer's Stone" could be as good a family film as, let alone better than, "Monsters, Inc."

Screenwriters Andrew Stanton ("Toy Story") and Dan Gerson (voice of Needleman and Smitty) have taken director Pete Docter's story and created a holiday classic that will keep the parents howling while their kids are being entertained. Along with the legion of in jokes (an "Armageddon" spoof, a restaurant named Harryhausen's, a special appearance by Woody), the filmmakers affectionately recall "How the Grinch Stole Christmas," perennial holiday TV favorite, "Rudolf, the Red-Nosed Reindeer" and Disney's "A Nightmare Before Christmas." Little Boo (Mary Gibbs, daughter of a Pixar story artist), as Sully names her, is a descendent of Cindy Lou Who, and she charms Sully just like Cindy softened the heart of the Grinch. When Sully and Mike are banished into the human world, they meet Yeti (John Ratzenberger, TV's "Cheers"), an Abominable Snowman who may need a dentist if he keeps eating his 'Don't worry - it's lemon' snow cones. And Sully himself, in trying to correct a wrong, makes the right discovery just as Jack Skellington did when he got childrens' screams putting his own personal stamp onto Christmas. Mike, the walking eyeball, seems like a tip of the hat to "Toy Story's" vending machine aliens.

Technically, "Monsters, Inc" is on a par with "Shrek." Sully's aqua and pink hairs individually blow in the breeze and get coated with snowflakes that look startlingly real. Boo's facial expressions and childlike movements blend beautifully with her doll-like image. Pixar's' animators get in plenty of visual jokes, such as Mike's sweetie Celia's (a well cast Jennifer Tilly) hair being composed of rattlesnakes, with their rattlers dangling like earrings or a transparent pink blob disappearing into a sidewalk grate. The factory setting of Monsters, Inc. is inspired.

The vocal performances are all marvelous, with John Goodman, in particular, pulling the heartstrings. Director Pete Docter gets every mood, and this film runs from romance to comedy to adventure (Sully's hair raising sled ride), just right. Randy Newman's score ably assists.

"Monsters, Inc." even ends on a gloriously perfect note. The audience at the screening I attended let out a collective 'Awwww.' It also begins with the charming "For the Birds," which should be a candidate for an animated short subject Oscar nomination.

Monstropolis is a thriving city on the other side of the closet door where the monster inhabitants are regular Joes like you and me. They punch the time clock for their jobs, hang around the water cooler to gossip and worry about things like jury duty, dating and straight teeth. It just so happens the predominant industry, Monsters, Inc., is in the business of frightening children in the night in order to collect the scream that power Monstropolis. "We scare because we care" is the company motto. But, in recent years kids have become more jaded and much harder to scare and there is an energy crisis in the making.

One day, after the night scare shift is over, Sulley (voiced by John Goodman), the company's best Scarer, discovers one of the closet doors was not put away. When he investigates he unwittingly lets a little girl into the world of monsters and we learn their worst fear - the scary creatures of Monstropolis are frightened to death by the children they are sent to scare! The tiny tots, they believe, are toxic and a single touch by one will result in a horrifying demise. Sulley, reluctantly assisted by his best friend and roommate Mike (Billy Crystal), a one-eyed creature resembling a green beach ball with horns and limbs, makes it his mission to return the girl, nicknamed Boo, back to the safety of her bed - without anyone, especially the boss, finding out about the breach of company rules. The adventure begins and it is a great one.

"Monsters, Inc." is the best kids' film of the year, hands down. (In my mind, it may end up being the best film this year, period.) Besides the copious amounts charming humor and action that will keep the kids glued to the screen there is the requisite adult-attracting mirth that will keep the eyes moving and the funny bone tickled. This includes homage to the great stop-motion monster movie animator Ray Harryhausen and a plethora of other mature (and not so mature) humor. Suffice it to say that a single viewing is nowhere near enough to catch all of the side jokes, movie references and sight gags the makers sprinkle, liberally, throughout "Monsters, Inc.".

Techs are, in a word, incredible. To give substance to the enormous effort of computer-generated animation, where "Toy Story 2" needed 1.1 million rendermarks (a measure of computing power), "Monsters, Inc." required 2.5 million and gives life to things like fur and hair. Sulley's blue-green, purple-spotted coat, alone, includes nearly 3-million individual hairs. The result of this incredible tour de force technical effort is to put the viewer into the world of nightmare monsters (though they are, generally, lovable monsters) and make you believe this wild, wacky world really exists.

Of course, the voices that give life to the diverse characters that inhabit "Monsters, Inc." are as important as the technical efforts and, as usual, Disney/Pixar picks out the best. John Goodman's lovable lug, James P. Sullivan (known as "Sulley" to everyone), an eight-foot tall, 800 pound scary creature with a heart of gold, is the perfect combo of voice and animation and makes you wish you had him living in your own closet. His best buddy and watchful companion, Mike Wazowski, is marvelously matched with the rapid-fire wit of Billy Crystal voicing the little critter who assists Sulley in his chores as top kid Scarer. Rounding out the unlikely trio is Boo, voiced by now-five-year-old Mary Gibbs, a brave little girl who finds herself on the monsters' side of the closet and is not scared in the least. Using a child to voice a child is one of the most enchanting, believable aspects that anchor the film with an element of familiar reality.

The rest of the vocal cast is used to good effect to bolster the background characters and the story. Steve Buscemi is conniving and ruthless as the ambitious Randall Boggs, an eight-legged lizard-like monster that can blend into his surroundings like a chameleon and is Sulley's chief rival for the number-one Scarer spot. James Coburn gives paternal voice to Henry J. Waternoose, the crab-like owner of Monsters, Inc. Although he has a great deal of affection for his favorite, Sulley, he will do whatever it takes to save his company. Bob Peterson, the head story man on "Monsters, Inc." voices Roz, the company dispatcher who has a relentless affection for properly completed paperwork (and is the real power behind the throne. A Pixar productions favorite, John Ratzenberger, gives a delightful turn as the voice of the lonely Yeti, a monster banished to the Himalayas for breaking the rules of Monstropolis. (When he offers his guests snow cones that are, suspiciously, yellow, he is quick to declare, "They're lemon!") Others, including Jennifer Tilly (as Mike's love interest, the snake-haired Celia), Frank Oz and Bonnie Hunt, lend their vocal talents effectively.

A note of advice: make sure you and the kids are seated in the theater before the lights go down. As usual with Disney/Pixar there is a short animation preceding the feature called "For the Birds." It's worth the price of admission, alone, to get the chance to watch birds hanging out on a wire between two telephone poles. Trust me on this.

"Monsters, Inc." is destined to have a long, fruitful life on the big screen and has the legs to make it the successful starting salvo of the holiday movie season. Repeat viewings are a must if you want to catch all the varied humor that inhabits this wonderful monster world.