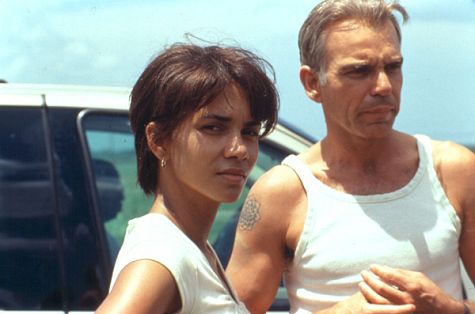 Hank Grotowski (Billy Bob Thornton, "The Man Who Wasn't There") has followed in his racist father Buck's (Peter Boyle, TV's "Everybody Loves Raymond") footsteps as a correctional officer at a Georgia State Penitentiary. As leader of the death squad, Hank is now training his son, Sonny (Heath Ledger, "A Knight's Tale"), in preparation for the execution of Lawrence Musgrove (Sean Combs, "Made"). When Sonny lets him down during Musgrove's last walk, the consequences are tragic, but Hank's chance meeting with Musgrove's widow Leticia (Halle Berry, "Swordfish"), a woman with her own tragedies to bear, results in redemption in director Marc Forster's "Monster's Ball."

"Monster's Ball" is a flawed film of sloppy inattention to detail and questionable emotional veracity featuring a terrific performance from Halle Berry and several scenes of stark potency. Forster's followup to his technically disadvantaged "Everything Put Together" isn't a major leap forward, yet still pegs him as a raw talent with a knack for strong lead actress portrayals.

The three generations of Grotowski men's feelings for the black people they live among are summed up in one scene. Buck spies two young neighbors running across their yard and spews vicious commentary that Hank cuts short by confronting them with a rifle shot over Sonny's protests. The backyard graves of both Buck and Hank's wives, the former a suicide, mirror the present day relationship of Hank and Sonny to the same prostitute, Vera (Amber Rules), whom they occasionally call for abbreviated sex from the same, faceless position.

When Hank's conscience demands that he pull over to assist Leticia one rainy night, they have no idea of their connection, but Hank recognizes his own grief in her plight and reaches out. After a night of whiskey and naked need, Hank discovers her identity, but keeps it to himself and continues to woo her. An encounter with Buck sends Leticia running, but Hank's literal transformation of his dark home to one of light in conjunction with Leticia's eviction brings her warily back where she makes the same discovery.

Herein lies one of the problems with Will Rokos and Milo Addica's script - everything's too neatly paralleled, exposing the script's structure rather than immersing the audience in the messiness of real life. Buck says something foul to Leticia and Hank sweeps years under the rug by shipping him off to a nursing home (where his roommate is a black man, natch). Forster allows head scratching details to pile up that may move his plot, but distract, like when Hank sees a photograph of Lawrence in a morning after visit to Leticia's bathroom. Who keeps family photographs in the bathroom? Leticia drinks Jack Daniel nips with Hank while a semi-full bottle can be glimpsed on her coffee table. Her son Tyrell 'hangs' his fathers' sketches on his bedroom walls by simply pressing them there. The titular Monster's Ball is described as a party given the night before an execution, yet it never happens for Lawrence, while the gore from a suicidal shooting isn't cleaned off a living room chair until after the body's burial.

Still, the actors make much of the film work. The film's strongest scene happens early in the film, when Leticia brings Tyrell to visit his father one last time. Sean Combs, in yet another strong, small supporting role, quizzes his harried wife about the condition of her car and payments on the house. Berry's resentment at holding things together alone for eleven years is summed up in her simple 'I'm tired' rejoinder. Berry's demand of Hank to 'make her feel good,' results in one of the most honest portrayals of neediness ever put to film, yet Forster distracts once again with clumsy cutaways of hands entering a bird's cage, recalling the awkward handling of his prior heroine's breakdown.

Thornton, while not as strong as Berry, is also good in his second role in a row of a man of little words, although his transformation is abrupt. We're given no background as to why Hank would allow Buck to overshadow his life then jettison him after one incident. (Similarly, Musgrove is represented as such a decent man in his dealings with people, one wishes for knowledge of his crime and his history with Leticia.) Boyle is strong as the hateful bigot, as is newcomer Coronji Calhoun as Leticia's pitifully overweight son. Ledger's Sonny isn't given a chance to flesh out his character. Rapper Mos Def appears as Hank's neighbor.

"Monster's Ball" wraps up by infantilizing its heroine in a tentatively tender moment. It's a frustrating work with moments of undeniable power.

The imminent execution of death row inmate Lawrence Musgrove (Sean Combs) will have a dramatic impact on the lives of his beautiful, troubled wife Leticia (Halle Berry) and the head of his execution squad, Hank Grotowski (Billy Bob Thornton), in ways that neither could ever expect in helmer Marc Forster's long-anticipated film, "Monster's Ball."

This is the story of two lonely, lonely people who are thrust together through circumstance and the tragedies in their lives. The attraction for both is the overwhelming need for each, emotionally, when they have had to keep such needs bottled up within. Hank has followed in the footsteps of his father, Buck (Peter Boyle), as the boss of death row in the Georgia state penal system. Pop is a lifelong bigot and racist and Hank grew up with prejudice so ingrained that he, himself, believes his father's vitriol. His son, Sonny (Heath Ledger), is also in the family business as a guard working for his Hank. When Sonny shows weakness during the final walk for convicted killer Musgrove, abandoning his post to throw up, it causes Hanks to flip out, later, and slap his son for failing to provide the prisoner a dignified ending. Sonny is not suited for the grisly job and, in an armed confrontation with his dad, ends his own life. It is all too much for the middle Grotowski and he quits his longtime prison job.

Leticia Musgrove is the long-suffering wife of Lawrence and has withstood his incarceration and imminent death sentence for 11 years. She has had to raise their son, Tyrell (Coronji Calhoun), who has a serious weight problem, all by herself and has had to struggle to keep a roof over their heads. She is at the end of her rope just as Lawrence is at the end of his life and sits, resigned, with her son in their threatened home when the grim reaper comes for her husband. But, this is not the end of the tragedy that Leticia must face. When her wreck of a car finally gives up the ghost, she is forced to walk the distance between her apartment and her job as a waitress. One rainy night, there is a horrible accident that claims the life of Tyrell and Hank enters the picture, first as a Samaritan and later as much more.

The shattered Leticia accepts a ride home from the hospital from Hank and she invites him to come inside. In one of the film's most powerful scenes, she pleads, even demands, that Hank make love to her. "I need you!" she exclaims over and over to him. The need is mutual for Hank, too. This sets the tone for the rest of the film as the tragedies both have suffered are put behind them and a different phase of their lives is about to unfold.

The best thing about "Monster's Ball" is the outstanding performance by Halle Berry. The actress takes it to the edge and strips herself, emotionally, bare as she convincingly displays the utter grief that envelopes Leticia. There is a raw power to Berry's performance that outshines everything else in the film. Billy Bob Thornton gives a low-key performance that is very similar to his recent perf in the Coen brothers' "The Man Who Wasn't There." It is not the same character by any means but his delivery of Hank is in same soft-spoken, minimalist way that keeps you at arm's length from the man.

Peter Boyle proves himself, once again, to be a terrific character actor. Most people will probably equate the actor to his role as curmudgeon Frank in the popular sitcom "Everyone Love Raymond," but Boyle's career has been one of talented diversity from the loveable monster in "Young Frankenstein" to a sleazy private eye in "Hardcore." He shows skill in "Monster's Ball" in the small but important role as the bigoted Buck. In one scene in particular, when he meets Leticia, he delivers a monologue that stuns the young woman with its hateful racism. Unfortunately, Boyle is dropped, unceremoniously, from the picture in a way that can only be called abrupt. Young Coronji Calhoun gives a sympathetic performance as a kid with an eating disorder whose mother doesn't understand that it is beyond his ability to control it. Heath Ledger is in and out of the film in too short a period of time to establish Sonny as a truly troubled individual.

With the exception of Berry's intense performance, the tone of the film is emotionally minimalist. There is a slow, deliberate, plodding pace - with long pauses in dialog before a static camera - that puts me in mind of David Lynch's films. The difference is that the latter is able to keep you intrigued, waiting, so to speak, for the other shoe to drop. Helmer Marc Forster doesn't have the masterly control of Lynch to be able to sustain the low-key playing of "Monster's Ball." There is a sense of "c'mon, let's get on with it" as each scene slowly plays out. There are solid, intense high points to the film, but the minimalism predominates too much.

The screenplay by Milo Addica and Will Rokos is episodic in nature and uses slender bridges between the episodes to tie things together. This makes the flow of the story have a choppy feel that causes me think that the writers are more concerned with scripting the parts and not the whole. Many scenes are designed or executed in ways that don't make sense, like when the characters are shooting back nips of Jack Daniels as the camera shows us a partially full big bottle of the liquor on the table before Hank and Leticia. This may not seem like much, but there are a number of such inconsistencies that bring way too much attention to them, distracting me from the scenes. Tighter production and writing would have benefited the film. Other techs, including photography by Roberto Schaefer and score by Asche and Spencer, are solid.

Halle Berry's performance makes "Monster's Ball" well worth the effort to see it. There are other good things in it too but, overall, it fails to meet the hype that preceded it.