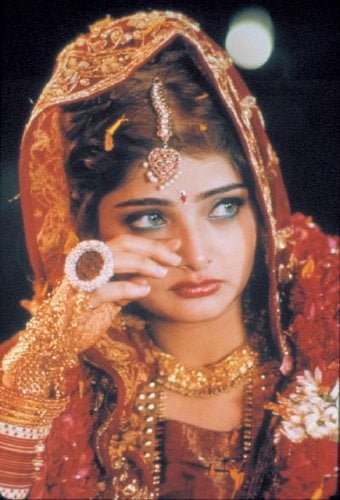 As the Punjabi Verma family prepare their New Delhi home for the arranged wedding of daughter Aditi (Vasundhara Das) and the international guests it will bring, tradition butts heads with the modern world and Lalit Verma (Naseeruddin Shah) experiences the universally known headaches encountered by all fathers of the bride in Mira Nair’s Venice Golden Lion winner, “Monsoon Wedding.”

Mira Nair, director of the Academy Award nominated “Salaam Bombay,” rebounds from her disappointing last two films with this joyously messy look at a contemporary Indian family. “Monsoon Wedding” would have benefited from some cutting in its draggy midsection, but the delights it has to offer far outweigh any flaws.

The film opens as Lalit laments the breaking down of a floral arch as it dumps marigold petals upon his head. He screams for wedding planner P.K. Dube (Vijay Raaz), a sleazy, obsequious, cell phone toting businessman who disses his clients behind their backs. These two men with their opposing perspectives will ground Nair’s film in surprising ways.

The pretty bride has agreed to the arranged marriage to a Houston engineer in order to get away from India and the married lover she’s split with even as she continues the affair. Her cousin Ria (Shefali Shetty) is keeping a hawk’s eye on Uncle Tej (Rajat Kapoor), a respected family benefactor giving undue attention to a pre-adolescent girl. Another cousin, Ayesha (Neha Dubey), is flirting outrageously with Rahul Chadha (Randeep Hooda), a nephew returned from Sydney whom Lalit deems an idiot. Lalit’s also unhappy that his younger chubby son is interested in cooking and dancing rather than mathematics, but wife Pimmi (Lilette Dubey) protects him. Brother-in-law C.L. (Kulbhushan Kharbanda, “Lagaan”) unsuccessfully tries to don a veneer of sophistication which prospective in-law and father of the groom Mohan Rai (Roshan Seth, “Ghandi”) exudes effortlessly. Bridegroom Hemant (Parvin Dabas) spends his time trying to get Aditi alone in order to woo her. Meanwhile, the Vermas’ lovely and graceful maid Alice (Tilotama Shome) has caught the eye of P.K. Dube who becomes a man truly transformed by the power of love.

Nair’s bright and colorful document of the four days leading up to a wedding invites the audience in as extended guests. Sabrina Dhawan’s debut screenplay artfully mixes comedy and musical numbers with seriously dramatic storylines featuring adultery and incest. It’s a neat little trick that the romance between a maid and event planner upstages the main event and that we have no trouble believing that a Cosmopolitan-reading career woman could find happiness in a wedding arranged by her parents.

The cast is exceptional with Shah’s endearingly overwhelmed Lalit and Raaz’ amazing character arc as Dube the standouts among the men. Shetty’s powerful Ria and Shome’s positively luminous Alice give the most dazzling female performances.

“Monsoon Wedding” is a joyous occasion.

Latit Verma (Naseeruddin Shah) and his wife Pimmi (Lillete Dubey) are in the final stages of marrying off their daughter Aditi (Vasundhara Das) in a traditional arranged contract even as the girl continues an affair with her married boss. But this is not the only drama that will take place over the next four days as relatives from all over the world descend on Delhi for the wedding ceremony in Mira Nair's "Monsoon Wedding."

Helmer Nair has concocted a kitchen-sink, soap opera kind of film, from the script by Sabrina Dwahan, with many story threads and subjects ranging from pedophilia and child abuse to budding romance, steamy flirtation, an adulterous bride, and elaborate wedding plans that harkens back to the Spencer Tracy version of "Father of the Bride."

As dad fusses over the details of the expensive (and constantly getting more so) wedding, he is continuously on the phone grousing at event manager, P.K. Dube (Vijay Raaz), over one infraction or another in the preparations. Dube is distracted in his efforts by the Verma family's virtuous young maid Alice (Tilotama Shome) and the lifelong bachelor may finally have found true love.

Other intrigues take place as Aditi's unmarried cousin Ria (Shefali Shetty) shows strong hostility toward her uncle's best friend in a story thread that will reveal a deep, dark secret. Another cousin, vivacious teenager Ayesha (Neha Dubey), goes against her traditional upbringing as she makes flirtatious advances toward Rahul Chadha (Randeep Hooda), a Sydney college student returning home after years away. Add to this mix the throng of soon-to-be in-laws that needs to be fed and feted for the duration of the festivities.

With so much going on, so many story threads and so many characters, the film seems rushed at 113 minutes. All the stories - comedy, romance and drama - are given equal weight and time, though some are more complex and needed further examination. The anchor for the film, and one of the best characters, is Latit. He is a true father of the bride and shows that dads the world over want the best for their little girls on that very important occasion. Shah gives complexity to his character as the man not only has to cope with the financial headaches of the event, he must also take a stand in support of his niece, even if it causes a family scandal.

The bride's tale, which should be as important as any story, is shallow and uninvolving, mainly due to the near vacuous performance by Vasundhara Das. The actress is beautiful and exotic looking but does not come across with anything that approaches sympathetic. A more significant story is that between event manager Dube and shy, attentive Alice. Dube's fumblings in his awkward courtship are endearing and bound to tug on even the toughest film buff's heartstrings, with Vijay Raaz giving full development to the character of the ambitious P.K.

The production is bright and colorful, especially the gorgeous costuming by Arjun Bhasin and festive sets - marigolds are a prominent feature - by Stephanie Carroll that give a vivid color palette for cinematographer Declan Quinn to play with.

"Monsoon Wedding" tries to cover too many bases and makes too many statements in its relatively economical runtime, using symbolism in place of character development (with Naseeruddin Shah and Vijay Raaz notable exceptions). Nair does capture the complexity of a big family and its trials and tribulations during such an important occasion.