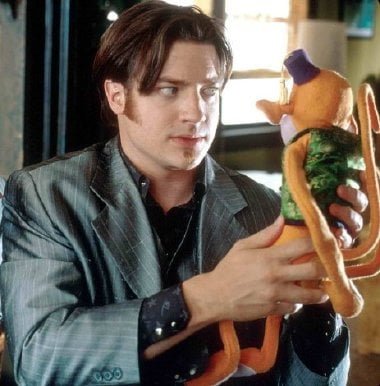 Stu Miley (Brendan Fraser) is on top of the world. He's madly in love with beautiful Dr. Julia McElroy (Bridget Fonda) and has a hit animated TV show based on his main character, a mischievous monkey named Monkeybone. A freak accident puts Stu into a deep coma where his nightmare world comes alive and he must fight his way back to the land of the living in "Monkeybone."

The film opens with a short animation, Monkeybone, conceived and created by the reclusive Stu. He hates the attention, especially the merchandise marketing, that the fame his creation has spawned. An unfortunate car accident involving a giant, inflatable Monkeybone doll knocks Stu unconscious with little chance for revival. While his doctor girlfriend, Julie (Bridget Fonda), fights to bring him back before his selfish sister, Kimmy (Megan Mullalley), can pull the plug, the animator finds himself cast into the land of his nightmares. To his surprise, Stu learns that the bad dreams that have plagued him his whole life are a big hit in Downtown, the purgatory-like limbo between life and death. His celebrity status has come to the attention of Hypnos (Giancarlo Esposito), the god of sleep, and poor Stu soon learns that he can never leave his underworld prison.

This is the kind of movie that must have looked good on paper - the popular Brendan Fraser starring in a Tim Burtonesque film about the land of nightmares and all the creatures that reside there. Admittedly, the art direction and imagination that went into the creation of Downtown and its bizarre inhabitants is second to none, and is reminiscent, at times, of Burton's "Beetlejuice." The effort is laudable in its visual achievements in creating the frightening demons of Stu's dreams. But, this creative artwork does not have a story to hold it together. There is no real tale, at least not one I care about, to involve the earthbound characters. It's visual eye candy in the nether world and not much more.

Helmer Henry Sellick has ample experience with the creating a fantasy worlds as is very evident in "The Nightmare Before Christmas" and "James and the Giant Peach." The demon world of the land of nightmares in "Monkeybone" is further proof that he and his team of filmmakers know how to create a dark fantasyland. The same cannot be said for his direction of the live actors in their world. This is where "Monkeybone" falls flat, leaving the actors to mouth their lines while the possessed Stu revels in the havoc he causes amongst the living.

Brendan Fraser has been used to better effect, especially in his last film, "Bedazzled," where he got to do a multitude of characters and some good comedy. In "Monkeybone," he, like the rest of the "human" cast, is left out in the cold, playing second banana to the terrific F/X, stop motion camera work and computer-generated animation. The rest of the cast, a pretty good collection of comedic actors, is wasted in their various character roles.

Bridget Fonda has the unenviable task of being the loyal girlfriend, Julie, and has little to do but look pensive or startled. Whoopi Goldberg, a veteran of this kind of comedy, doesn't do anything with the great potential of her character, Death. Giancarlo Esposito does his best to give some evil mirth to his half-man, half-goat, Hypnos, but, falls to the power of F/X. Chris Kattan gets some mileage as the dead gymnast/organ donor that Stu possesses when he returns to earth to get his own body back. Plan on watching a stomach or a kidney fall out of Stu's temporary bod, only to be snatched up by a greedy gang of organ harvesting doctors. Rose McGowan is cute as the aptly named Kitty, while a blond, goateed Dave Foley could have phoned in his slimy agent character, Herb.

Special F/X, alone, do not make a movie. There has to be a good story to hang terrific techs on and that does not happen with "Monkeybone."