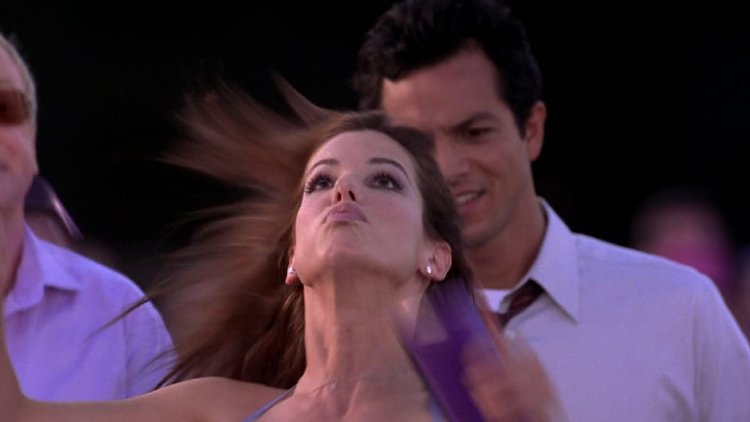 An infamous psychopath, called "the Citizen," has terrorized the nation with a rampage of bombings, shootings and arson. His next chosen target is the hallowed home of American beauty, the Miss United States Pageant, and it's up to the FBI to stop him. Enter Special Agent Grace Heart (Sandra Bullock), pretty but lacking, shall we say, in the social graces, who is chosen to go undercover as a contestant in the national beauty contest and nab the felon in "Miss Congeniality."

Special Agent Gracie Hart (Sandra Bullock) despises all things culturally regarded as feminine and is considered one of the guys by her male coworkers at the F.B.I. When she makes a wrong choice during a bust, she's passed over for an operations lead to nab the infamous "Citizen" bomber. That honor goes to her competitive coworker Eric Matthews (Benjamin Bratt, "The Next Best Thing"), who doesn't have a clue where to start. Gracie figures out from the Citizen's clues that he intends to hit the Miss United States pageant in San Antonio, and before she can say 'high heels', she's picked to go undercover as a contestant in "Miss Congeniality."

This Sandra Bullock produced vehicle is just that - a Sandra Bullock vehicle and nothing more. The film is completely derivative (see "My Fair Lady," "Never Been Kissed," etc.). It also suffers from 'traileritis' in that there are very few laughs outside of what's already been presented in its marketting.

The screenplay, by Marc Lawrence ("Forces of Nature"), Katie Ford and Caryn Lucas, features F.B.I. agents who act like a pack of frat boys (their mission is named Operation Thong), an unappealing love interest, the heroine stumbling over her heels over and over and over, an easily detected false suspect, and forty-eight contestants with no personality (Heather Burns as Cheryl, Miss Rhode Island, is the only one who's the least bit fleshed out).

The Bureau hires pageant consultant Victor Melling (Michael Caine) to transform the klutzy, dishevelled Gracie into Miss New Jersey, which he does in short order in an airplane hanger with a huge staff. Once this segment is completed, the comedy deflates. We're introduced to Miss Morningstar (Candice Bergen), the head of the pageant, her inept assistant Frank (Steve Monroe, "The Nutty Professor"), and long-time emcee Stan Fields (William Shatner) and surprise - all have axes to grind. Then the film just goes through its paces as Gracie gets in and out of scrapes, cozies up to Matthews (a character presented as a shallow, juvenile womanizer who's not too good at his job either), saves the day and realizes that beauty contestants are people too. Yawn.

Bullock should be commended for shining as much as she does with this material. Her comic abilities are firing on all cylinders and Gracie gets the audience on her side quickly. Physically, she's convincing wrestling a man or diving onto a suspect. Bullock also really adds sizzle when the material gives her something to work with. Her only support here comes from Michael Caine as a humorously sarcastic Henry Higgins. The rest of the cast is shrill or bland.

Technically the film is of commercial standards.

Bullock fans may be happy with "Miss Congeniality," but those in search of a real comedy should look elsewhere.

Sandra Bullock has come a long way since her star-making debut in 1994's blockbuster, "Speed." Since then the actress has turned producer and "Miss Congeniality" is the product of that change. Working from a script by Marc Lawrence, Katie Ford and Caryn Lucas, the film is a combo of crime caper and "Pygmalion," with Bullock as a super cop crossed with Elisa Doolittle.

A Unibomber style nutcase is terrorizing the country with his senseless mayhem. When another of "the Citizen's" cryptic letter arrives at the FBI, Special Agent Eric Matthews (Benjamin Bratt) is put in charge of the case. The letter is deciphered and shows that the Miss United States Beauty Pageant is the target for his next nefarious crime. The only way to uncover the madman, the plan and his victim is to place an agent into the pageant as a contestant. The only agent that fits the bill (read that: looks good in a swimsuit) is Grace Heart. There is only one problem. Grace acts more like a guy than the guys around her do.

The Bureau hires a master beauty pageant consultant, Victor Melling (Michael Caine), to turn the sow's ear that is Grace into a silk purse. Henry Higgins has nothing on the challenge that Vic must face in trying to change the uncooperative agent not just into a beautiful woman, but one who is good enough to make it as one of the pageant's final five contestants. Special Agent Heart is against the plan and refuses to join a "bunch of bikini stuffers who only want world peace." But, her career is on the line and, reluctantly, she undergoes the make over that will turn her into Miss New Jersey.

This is all a cute premise for a film and the story takes the direction that one expects. As Grace undergoes her metamorphosis from bedraggled, cynical and tough law officer to sleek, poised and elegant national beauty contestant, she realizes that changes are happening within her, too. Against her prejudiced will, Grace begins to get to know the other contestants and realizes that they aren't the bikini stuffers she thought they were. In particular, Cheryl (Heather Burns), Miss Rhode Island, takes a liking to Grace and, against the agent's will, she makes friends. Grace's mission to protect her, now, friends takes on an even greater urgency when she learns that pageant organizer and former contestant, Kathy Morningside (Candice Bergen), is a prime suspect. You can take it from there.

"Miss Congeniality" has a hard time getting past its by-the-numbers, routine plot that pulls in the usual chestnuts of undercover cop tale, "My Fair Lady," fish-out-of-water story and, for good measure, a romance. It also attempts to show the makings of a big-time beauty pageant and how they are really scholarship programs and not just swimsuit shows. There is a lot of stuff going on here and it gets muddled as the story progresses.

This is the likable Sandra Bullock's show. The writing focuses of Grace and her gruff personality that you know will undergo a change the same way her whole look is altered by artiste Victor Manning. The camera never leaves the actress for long as we see her go from mannish FBI Agent Grace Heart to megababe and beauty finalist Gracie Lou Freebrush. Bullock has the personality and a comic ability to hold the center of the film, but this is virtually a one-woman show. The only exception is the funny, fey performance by Michael Caine as the mysteriously blackballed pageant consultant. Caine gets the only chance to steel the star's limelight and is an epiphany in a nicely developed comic role.

The rest of the cast, including Benjamin Bratt, get little to do but fill the screen around Bullock. Bratt is handsome enough and may have talent, but he has yet to get a role that is a break through. Other characters are generic and unmemorable. William Shatner is wasted as Stan Fields, the long time pageant emcee who is being fired because he is "too old," a la Bert Parks and the Miss America pageant. Nothing ever happens with the character or his dilemma in a poor piece of story crafting. I could not watch Candice Bergen without thinking, "Murphy Brown."

"Miss Congeniality" doesn't bring you any closer to the world of beauty pageants. Nor does it deliver more than a few chuckles as we see Agent Grace stumble and fall repeatedly because of her high heels. It worked once, maybe twice, but not six or seven times. There could have been a better film in there.