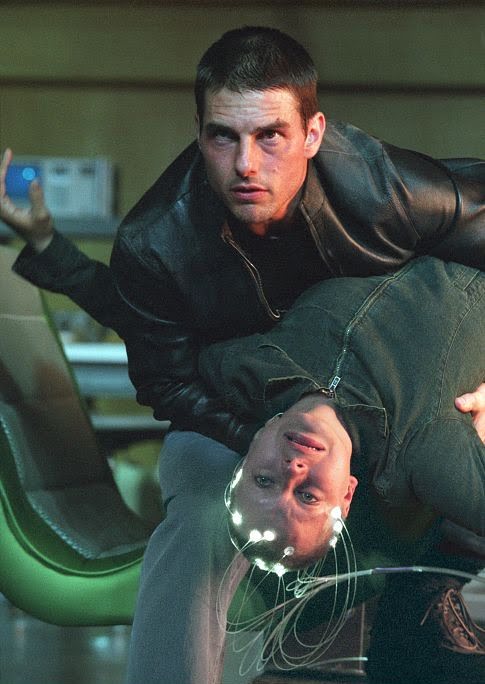 It's the year 2054 and Washington DC has not had a single murder take place in 9 years. Why has the country's homicide capital become a safe haven for its citizens? The Pre-Crime Department was established under its mentor, Director Lamar Burgess (Max Von Sydow), and, with his chief detective, John Anderton (Tom Cruise), assisting, has harnessed the precognitive powers of three genetic mutants (the "Pre-Cogs") to stop murder before it happens in the long-anticipated Steven Spielberg/Tom Cruise science fiction thriller, "Minority Report."

"Murder" intones the female member of the Precog Trinity who inform Washington D.C.'s Pre-Crime unit of murder victims and perpetrators when they see the crime before it happens. Floating in a Temple held pool, Agatha (Samantha Morton, "Sweet and Lowdown") recalls the Star child of Stanley Kubrick's "2001" while her utterance is a backwards echo of Danny Torrance's "Redrum" in his "The Shining." Where "A.I." played like a mismatched wedding between the cooly intellectual Kubrick and the sentimental populist Spielberg, "Minority Report" is the assured work of a mature auteur paying homage to those who influenced him.

John Anderton (Tom Cruise) is the lead investigator of his mentor, Lamar Burgess' (Max Von Sydow) Pre-Crime Dept. Tortured by the kidnapping of his young son while under his care at a public swimming pool, John's marriage has disintegrated and he spends his days collaring 'pre-criminals,' his nights sniffing Clarity while watching holograms of happier days. Soon after Detective Ed Witwer (Colin Farrell, "Hart's War") arrives to inspect the unit for national roll out recommendation, Anderton is astonished to see himself displayed and named by the precogs as the murderer of a stranger. In the world of 2054 (as imagined by an impressive Think Tank assembled by Spielberg) where retinal scans are commonplace, Anderton faces an enormous challenge in staying undercover until he can prove what he believes - that he's been set up.

A visit to the remote home of the precogs discoverer, Dr. Iris Hineman (Lois Smith, "Twister"), yields important information. Hineman's intent was the developmental care of crack babies. Their use as Pre-Crime demigods was a dark twist of Burgess's. Hineman also tells Anderton about the minority report, cases where the female precog sees differently than her male counterparts, which is only stored within the precog itself.

Spielberg and his screenwriters Scott Frank and Jon Cohen have taken sci-fi writer Philip K. Dick's short story and added dense layering to what is essentially a noir whodunit with a titular macguffin. The film's tag line 'Everybody runs,' refers first and foremost to Anderton's flight from Pre-Crime, but is also physically grounded in his sprinting ability, a talent he encourages in his son during those technologically recreated family evenings. Pool themes are reflected from the Precogs' nutritive environment to the murder of Agatha's mother in a pond and the loss of Anderton's son while he attempts to hold his breath underwater (a talent that will come in handy when he tries to escape robotic spiders via an ice-filled bath). Seeing and its duplicitousness is constantly referred to, from the foreshadowing of a drug dealer's "In the land of the blind, the one-eyed man is king," to the names emblazoned on the shiny orbs dispensed after a precog vision, to the human eyeballs rolling away from their former owner now fitted with new ones to fool scanners. Religion is alluded to by the deification of the Precogs and the film's investigation into fate vs. choice. The Spielberg of "E.T." and "A.I." can be found in the twinned motivations of perpetrator and victim in stolen children.

"Minority Report's" weakest element, though, is in its climatic denouement which is flattened with family sentiment, pedestrian revelations and the overkill of narration over perfectly explanatory visuals. The film would have been better served by a more swiftly edited conclusion.

Tom Cruise once again lets his movie star face be meddled with, but not before Spielberg allows some of his older supporting ladies to have a grab at the man. Cruise embodies the efficient capability of the Pre-Crime cop and crushing despair over the loss of his son. But it is not the big names, including von Sydow and up and comer Farrell, that get the best opportunity to play. Samantha Morton gives an eerie performance full of alien physicality as the child turned into a precognitive police computer. Lois Smith makes her one scene delightfully eccentric, naturally interacting with her effects-laden botanicals. Both go on the long list as potential Best Supporting Actress nominees.

ILM's effects work here is far more imaginative than anything in the most recent Star Wars. The Mag-Lev transportation system, where vehicles resembling bumper cars travel along magnetic steel ribbons, is both retro and futuristic. Hundreds of details, such as the animated characters on Anderton's cereal box, are almost impossible to completely catch on one viewing. Janusz Kaminski's ("Schindler's List") desaturated cinematography perfectly suits the retro noir feel Spielberg cloaks his story in, while another of the director's regulars, John Williams, delivers an edgy score with none of his usual bombastic sugariness. The entire production design is fabulous. Sound design is painstaking, with engineers recording a particular spider species in order to obtain metallic clickings for the film's robotic spiders.

The trailers for "Minority Report" lead you to think that this sci-fi actioner, based on the short story by Philip K. Dick (who provided the inspiration for such films as "Blade Runner" and "Total Recall"), is about a crime fighting system that goes awry for its chief cop, Anderton, and he must fight to exonerate himself. Sure, there is that, but there is also a murder mystery that is the real underlying story (developed by script scribes Scott Frank and Jon Cohen) and this is what makes "Minority Report" a complex, satisfying sci-fi yarn.

"Minority Report" is a special F/X juggernaut that mixes the live action with copious quantities of computer effects that are seamlessly integrated with a first rate science fiction tale. Visually, the film is stunning with lots of action, mystery and some pretty cool looking imagery as Detective Anderton uses his manipulative skills to search through the recorded "memories" of the future by the Pre-Cogs secretly kept by the Precrime cops. There is so much going on during the course of the film that it begs for repeat viewing to take it all in.

Spielberg and company create an imaginative view of a future a half a century hence. Their Mag-Lev (Magnetic Levitation) transportation system takes the futuristic vehicles and propels them on both horizontal and vertical planes but in a realistic rather than a "Star Wars" manner. Another nifty effect developed by the Industrial Light and Magic crew is the "spider," a mechanical creature resembling an arachnid that can go anywhere to scan the retina of anyone to get a positive ID. The special F/X extend to the production design of the Hall of Containment where all the perps of pre-murder are kept in cold storage.

Speaking of production design, the range and variety of sets is amazing. Designer Alex McDowell participated in the Think Tank of experts brought in by Spielberg to brainstorm how Washington would look in half a century. The traditional look of the city is maintained with the White House and the Capital intact. But, the upper class world, the down trodden blue collar community rep'd by the seedy hotel John hides out in, Pre-Crime headquarter, the Hall of Containment and the rest are created with a fine attention to details of a future world.

The huge cast is led by its star and there is nary a false note throughout. Cruise holds the center stage as John Anderton and is on the money as actor and stunt man - he did virtually all his own stunt work in the film. The venerable Max Von Sydow plays the benevolent head of Pre-Crime but he is a man with his own deep, dark secret. Samantha Morton has the tough job of being the premier Pre-Cog kidnapped (or, perhaps, rescued?) by Anderton to help clear his good name. The actress portrays the mentally mutant precognitive who is more than a human being and less. Colin Farrell, as Justice Department mole Danny Witwer sent to put the kibosh on Pre-Crime as a national entity, is an enigma that unfolds as the film progresses, changing from apparent bad guy to, in reality, a good guy. Tim Blake Nelson is amusing as the invalided caretaker of the Hall of Containment.

Cruise is the star of Minority report, being on screen for the bulk of the film, but the megastar is often overshadowed by some splendid supporting performances. Lois Smith, as the "inventor" of the precogs, Dr. Iris Hineman, is electrifying opposite Cruise. Dr. Hineman knows of the pre-crime system's fallibility and guides the renegade cop to the answers he seeks. (She also puts such a lip lock on Cruise that the surprised look on his face may be genuine.) Jason Antoon, as a shifty cyber parlor owner named Rufus Riley, is an interesting character as a con artist enlisted by Anderton to help solve the underlying mystery. Peter Stormare, who rarely gives an understated performance, is once again outrageous as black market surgeon, Dr. Eddie Solomon, who is hired to replace the hero's eyeballs (I can still hear the collective "yuck!" voiced by the audience).

Techs are, as you would expect in a Spielberg extravaganza, superior. Frequent collaborator Janusz Kaminski provides rich and varied cinematography, from the cool, almost cold, interiors of Pre-Crime headquarters to the grainy, dark look of the future world exteriors as Anderton battles to clear his good name. Costumes, designed by Deborah L. Scott, are suitably futuristic without being bizarre. John Williams' score does not intrude on the action and actually compliments the film.

I think that Steven Spielberg had some unresolved issues about the late Stanley Kubrick after finishing up that maestro's "A.I." These issues are dealt with in "Minority Report" with a number of references, as homage, to Kubrick's "A Clockwork Orange," "The Shining" and other Kubrickian classics. It's interesting to see an auteur like Spielberg looking up to another filmmaker and paying him his due.

I found myself mulling over "Minority Report" for some time after seeing it, something that does not happen very often after catching a flick. The craftsman quality of the work, fine cast, good writing and superior F/X may make this a member of the best, ever, sci-fi flicks. I know that I want to see it again and take a closer look.