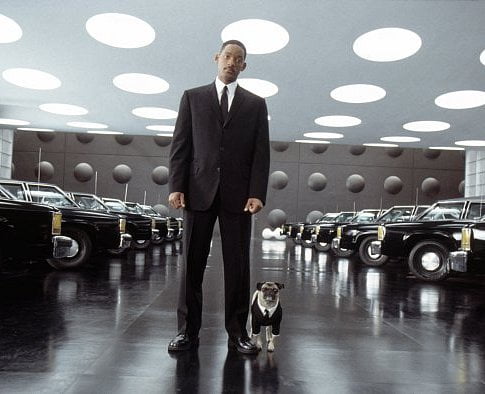 "Same planet. New scum." This is the war cry for the long-awaited sequel to the 1997 hit flick about our world and the aliens from outer space that secretly populate the earth. Agent Jay (Will Smith) is now the head honcho of the cops keeping order among the alien population, but a powerful newcomer, Serleena (Lara Flynn Boyle), has come to Earth to wreak havoc. Jay has to bring his old partner, Kay (Tommy Lee Jones), out of retirement to put a stop to the menace in "Men In Black II."

Without Agent Kay (Tommy Lee Jones), Agent Jay is getting lonely, neuralizing one partner after the next when they don't fill his mentor's highly polished shoes. When MIB Headquarters is infiltrated by Serleena (Lara Flyn Boyle) and her gang in search of the Light of Zarka, it appears only Agent Kay knows its whereabouts. It's up to Jay to deneuralize Kay and fight off the evil Kylothian in "Men in Black II."

This movie has the first press kit I can remember which offers the original film's grosses instead of the present film's plot synopsis. At least they're wearing their hearts on their sleeves. This insipid retread of the original film scatters about 5 decent jokes and they're almost all crowded into the first two acts. Barry Sonnenfeld owes Frank the Pug (voiced by Tim Blaney) big time.

The film begins with a pre-credit 1978 anthology show hosted by Peter Graves which shows a reenactment, complete with campy Ed Wood level effects, of the MIB incident which is sparking the current action. (Note that in a film with an 88 minute running time, this sequence is repeated.) Then we meet up with Jay and his current partner Tee (Patrick Warburton), who immediately mishandles errant alien Jeff, a giant worm. Once Tee's neuralized, we're in for the best part of the film, where Zed (Rip Torn) pairs up Jay with Frank, the talking pug. Whether singing "I Will Survive" in the passenger seat or barking the chorus of "Who Let the Dogs Out" or simply responding to his partner, Frank is innately entertaining. Give this dog a bone.

We also see Serleena land, disembark looking like "The Little Shop of Horror's" maneater, turn herself into a replica of a Victoria's Secrets lingerie model, and bisect a pizzeria owner in front of his terrified, but hidden, employee Laura (Rosario Dawson), a witness Jay can't bring himself to neuralize.

At the thirty minute mark, Jay travels to Truro, MA, where Kay is a Cape Cod postmaster. Act II involves getting Kay's memory back, which is as good an excuse as any for some toilet humor while Act III involves the inevitable showdown.

While stumping on talk shows, Smith and Jones have been quick to point out that the new film is different due to the reversal of Jay and Kay's dominance, but in truth, screenwriters Robert Gordon ("Galaxy Quest") and Barry Fanaro's ("The Crew") most original moment is to have Kay take a page from "Memento's" Leonard Shelby - he's left himself clues to figure out the whereabouts of an object he neuralized out of his own memory. One of these clues leads to locker C18 at Grand Central Station that features the film's funniest scene not involving Frank.

Smith and Jones replay their schtick, although Smith's energy level is lacking. His best bit involves some physical comedy near the end of the film. Rosario Dawson fits the bill as a love interest, but as to villain Lara Flyn Boyle - why didn't they just hire a real Victoria's Secrets model? The part requires little acting and the special effects budget could have been cut by not having to fashion a fake bosom. Johnny Knoxville ("Big Trouble") actually has more of a presence as Boyle's two-headed sidekick. David Cross and Colombe Jacobsen are standouts as a nerdy video store owner and his strange girlfriend.

Rick Baker's effects are fine, particularly when he's dealing with reappearing aliens like the Worm Guys. But some birdlike creatures look like escapees from "The Kids in the Hall" and a monster that resembles a pile of intestines is clearly nothing but a bunch of rubber. An alien referred to as a Ballchinian may get a groan of a laugh, but it, too, has appeared before - in "Kentucky Fried Movie."

"Men in Black II" may offer a respite from the heat and even some 4th of July fireworks for good measure. But please, if III is a glimmer in anyone's eye, make it about Zed and his new assistant Frank.

Return helmer Barry Sonnenfeld and his MIB stars Smith and Jones have bellied up to the bar again in anticipation of recreating the success of the their original venture which took in over $500 million at the box office worldwide a few years ago. The aim, I suspect this time around, is to beat that B.O. figure and make everyone involved rich. Too bad the filmmakers forgot to provide a movie even remotely close to the first. Where "MIB" intro'd a new, alien-enriched world with lots of humor, both tongue-in-cheek and slapstick, action and effects, the remake gives us retread F/X and little of the original film's humor.

Will Smith looks the least comfortable here than in any role he has had, and he has had some biggies. Agent Jay is the top dog, so to speak, in the MIB field operations and, like his predecessor Kay, has had to bear the onerous burden of policing the wild and wacky immigration world of intergalactic aliens. Jay is a cynic, now, and has lost the humor and smartass sassiness that so endeared him to everyone in the '97 flick. Now, Smith is required to mouth lines similar to "What is a dead Cerulean swamp dingy doing in the immigration lounge?!" Dialogue like this does not roll off the tongue and much of the time the actors are just mouthing their silly lines.

Tommy Lee Jones is so deadpan as the returned Kay that you'd think he wished he stayed in retirement as US Postmaster Kevin. He is able to pay lip service to the shoddy dialogue on the strength of his ability to deliver it with authority. Lara Flynn Boyle is awash amidst a sea of special F/X as the multi-tentacle alien bad guy, Serleena, in search of the key to omnipotent power - a maguffin called "The Light of Zartha (sic)". Her "human" persona is supposed to be a Victoria Secrets catalogue model, evinced by her scanty black underwear, but the actress is given nothing to do. Tony Shalhoub reprises his role as alien pawnbroker, Jeebs, who has his head blown off again, not once, but twice. (It was far funnier in the first "MIB.") Johnny Knoxville as Serleena's two-headed henchman, Scrad/Charlie, is hamstrung by the material - a good idea wasted.

The screenplay by Robert Gordon and Barry Fanaro is a manufactured rather than crafted story that reverses the ideas put forth in the first film. Remember when Kay decided he had enough of MIB and opted to be neuralized, wiping out all his memory of his super secret agency? Well, the scribes find a loophole - in the deep recesses of the former agent's mind lay the hidden memories of his past as an MIB and only needs to be releases by the application of the de-neuralizer. Very convenient but I can live with it. Unfortunately, there is little that is funny in "MIIB," with only a couple of exceptions.

To give the filmmakers their due, the expanded presence of Frank the Pug (voice of Tim Blaney), the talkative doggy MIB, and the Worm Guys (they used to make the coffee) provide the film's six laughs (I counted). It's pretty sad when a supporting character, and a dog to boot, is the best thing in the movie. Listen closely to Frank's lyrics to "I Shall Survive." They're worth the effort. It's too bad that the human characters don't fare as well.

The makeup and special F/X are slick but unimaginative. Goofy looking aliens abound but they are not any more creative than the beasties in the bar scene in the original "Star Wars." CGI stuff, like Frank's motor mouth, is done convincingly and well. Production design, by Bo Welch, does try to inject some character into the sets, especially the bachelor pad of the Worm Guys that is very groovy and retro and the place where girl can find out if it's true that "once you know worm, it's what you'll yearn."

I came out of "Men In Black II" feeling like I had been had. The makers have forsaken the entertaining elements of the original and, instead, rehash old jokes and leave any life at the doorstep. I like Frank the Pug, though.