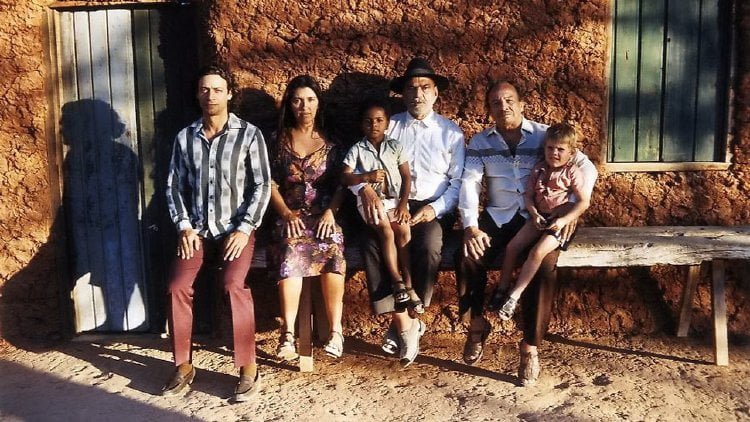 When Darlene (Regina Case) returns to her poor home in the Brazilian Northeast after giving birth to her son, she finds her mother being waked and her old neighbor Osias (Lima Duarte) in a matrimonial frame of mind. She gives a second son to Osias, the homeowner, but her third belongs to his cousin Zezinho (Stenio Garcia), the kindly homemaker. A fourth son is clearly on the horizon with the arrival of handsome field worker Ciro (Luiz Vasconcelos) in the Brazilian entry for Best Foreign Language Film, "Me You Them."

While "Me You Them" is described as a film about a woman with three husbands, it's really about how earth mother Darlene takes a series of lovers and manages to keep peace among them. Osias is a marriage of convenience - he offers a roof, but uses Darlene as a cook, accountant and slave laborer. Zezinho, who clearly adores his cousin's wife, gives Darlene the friendship her husband does not. Osias is duped by the affectionate couple until the arrival of his second son, who bears the blue eyes of Zezinho. Unexpected jealousy causes Osias to take more of an interest in Darlene, accompanying her and Zezinho to the dances they used to attend alone. It's during one of these outings that Darlene meets Ciro (who resembles a "The Fly" era Jeff Goldblum). Osias offers to take Ciro in as a border to thwart Darlene's romance with Zezinho, but they both lose out to the handsome stranger. When Darlene confides to Zezinho that she's pregnant with Ciro's child and that he wishes to leave with her, Zezinho convinces Osias to build Ciro his own room in order to get Darlene to stay.

Where Andrucha Waddington's film excels is in its ability to immerse us in the culture and environment of a remote land. Unlike the fantastical Brazilian comedies "Woman On Top" and "Donna Flor and Her Two Husbands," "Me You Them" is very rooted in reality. Life and conditions are harsh, people are sturdy and get dirty working in the fields. The film has a bright glow about it, however, with brilliantly crisp lensing by Breno Silveira. And while Regina Case is no Penelope Cruz, she embodies a magnetic vitality, an earthy sexiness. Gilberto Gil's original music reflects the regional sound, with heavy emphasis on the accordion.

"Me You Them" tells the tale of an extraordinary woman in a male dominated society. It will also transport you to a place of harsh and uncommon beauty.