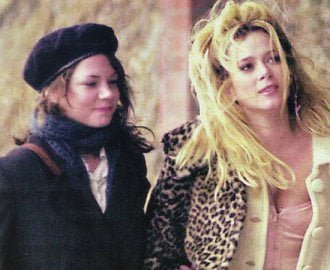 Cowriter (with Laurence Coriat, "Wonderland")/Director Sandra Goldbacher ("The Governess") shows considerable growth exploring the masochistic friendship of her sophomore Jewish heroine in period Britain. Where her "The Governess" was set in a time of repression, "Me Without You" gallops through a time of expression, when AIDs hadn't yet dampered sex, and punk and new wave defined the times.

As children, Marina is clearly dominant, the sparkling girl Holly's father Max greets with a special jingle. Marina's inclusion of Holly almost seems charitable at this point, with Marina binding Holly to her, making them one ('Holly and 'Rina = Harina'). An elaborate trust game involving broken glass and Marina's reaction to finding her brother deflowering Holly at a drug-fueled party hint at things to come.

Cut to 1982 and the college years that find Holly blossoming and Marina partying. Marina thwarts Holly and her brother's potential romance with lies, glad to see him take up with Isabel (Marianne Denicourt, "Sade"), a temperamental French actress. Yet when Holly captures the interest of her American literature professor Daniel (Kyle MacLachlan, "Blue Velvet"), Marina, becoming jealous of her friend, must have him too. This duplicitous pattern continues, with Holly becoming increasingly uncomfortable, particularly when Marina fobs off an uncouth suitor, Ray (Nicky Henson, "Parting Shots") on Holly and converts to Judaism to marry a doctor (Steve John Shepherd, "From Hell"). Marina wants nothing less than Holly's identity.

The screenplay's fault lies in its extremism, yet it portrays several truths about friendship in general and friendship between women, where competition can become problematic, in particular. Who hasn't admired the parents of a friend only to grow up and see that what appeals to a child may not be good for the adult? The writers use the New Year's holiday as a pivotal point to sum up relationships at each period they stop in. MacLachlan's character serves to highlight the differences between the two girls, just as their later beaus serve as stand-ins for a friendship that no longer serves either.

American Michelle Williams is impressive as a quiet English girl who gradually comes into her own, hurting no one but the mother who's best prepared her for life. Friel, however, nails the pretty girl who flounders when her surface alone won't suffice, pulling everyone within reach down with her. The miracle of Friel's performance is that she manages to maintain sympathy, perhaps best illustrated when her immediate reaction to a kindness from Holly's father is seduction - when gently rebuffed, her realization and self loathing are evident. Corduner is lovely as that perfect, reactive dad while Findlay's mom is more proactive, setting up the character for hurt. Trudie Styler bravely portrays an aging swinger as an unflattering signpost for her character's daughter. Oliver Milburn's Nat is both dreamily romantic and urgently pragmatic, the perfect man for Holly.

Art Direction by Steve Carter and Set Decoration by Rebecca Alleway bring the 70s, 80s and present to vivid life. Rosie Hackett's Costume Design both defines the eras and the friends' differences. The film's soundtrack is an 80s' music lovers' delight featuring such bands as The Clash, Adam and the Ants and Echo and the Bunnymen.

"Me Without You" is a probing examination of a female friendship set against a few dynamic decades. With this following the slightly artificial "Lovely & Amazing," it's clear that independent film is a much better medium for realistic presentations of female relationships than Hollywood's Ya Yas.

Marina (Anna Friel) and Holly (Michelle Williams) have been next-door neighbors and friends since they were kids. Although the girls are getting older and their interests take different paths there has always been a bond between them. This bond, even when is serves neither of them well, endures regardless in screenwriter/director Sandra Goldbeater decades-spanning "Me Without You."

Don't be mislead into thinking that, just because this is a movie about two girls and their life long friendship, it won't have any appeal to guys. Helmer/screenwriter Goldbacher tells a story that anyone who has had a childhood friendship will understand just how that relationship can (and did, for me) start to disintegrate as the friends grow and change into different people, eventually going their separate ways. "Me Without You" keeps the girls together long past when you would have expected Marina and Holly to part ways. The nicely rendered screenplay gives continuity to what, for most, would have been a long-forgotten friendship. It is a very intelligent and personal what-if story that examines friendship, jealousy, betrayal, love and lust with fair treatment given to all aspects.

Both of the stars, Anna Friel as the teen/adult Marina and Michelle Williams as Holly, command the screen, but each in a different way. Friel is wild and crazy and lives for the moment and whose gregarious nature takes pity on the bookish, Jewish Holly. Harina, their mutually shared nickname and personality, is an amalgamation of the two girls, one that is dominated by the flamboyant Marina. Holly, though, is not merely a follower and has learned something from all the years of having her nose stuck in books. As the girls get older, the roles change and we see that it is Marina who needs Holly. The characters don't meld into each other and each actress gives a good, sharp edge to her performance. American Williams doesn't go overboard with her Brit accent, keeping it subdued enough so I didn't even think about it.

This is a chick flick in that the ladies are, by far, the more richly represented in "Me Without You." Besides the mature, fully developed characters rendered by Friel and Williams, the girls' mothers are also 3-D. Trudie Styler (movie producer and superstar Sting's wife), as Marina's sluttish-acting mom, Linda, does a terrific job in portraying the source of her daughter's narcissism and flamboyance - and insecurity. Deborah Findlay, as Holly's mother, fully develops her character with such despairing advice as, "Some people are pretty people, and some are clever people, which is more important than looks."

Kyle MacLachlin as a randy, expatriated American scholar teaching literary criticism at the girls' college is a two-dimensional cad, but one that the actor has some fun with. Oliver Milburn is appealing as Marina's brother Nat, a handsome young man who has always been the object of Holly's secret desire. Marianne Denicourt gives substance to her small role as the sexy French actress, Isabel, who gets the hand of Nat. Alan Corduner, as Holly's doting dad, Max, is solid as the kind, loving and harmless family patriarch who must face a test of faith involving Marina.

The techs belie the obviously small budget with period costume and production design fitting the bill nicely as the years pass. Music represents the years well, too, with Sonny & Cher, The Clash, Adam and the Ants and others effectively used to bridge the years.

With a story (by the director and Laurence Coriat) that spans almost 30 years there are a lot of threads that develop over those years. Different relationships come in to play, life-affecting decisions, good and bad, are made and the story, like Ravel's Bolero, builds to a crescendo that encompasses many more paths than we started with. Rather than bore you or spoil things I'm not going into any detail about what happens between Marina and Holly. I suggest that you go see for yourself.