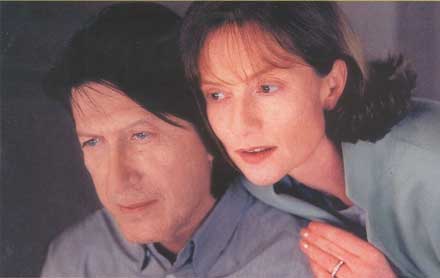 Septuagenarian Chabrol, long known as the French Hitchcock, knows how to utilize Huppert's cool brand of calculation. Their seventh collaboration is both as twisty and as obvious as the black web Mika literally spins with her crochet needle.

The biggest mystery in Chabrol's latest isn't what Mika may or may not be putting into her nightly chocolate drink concoctions, but the relationship between herself and Andre. Mika carefully covers her manipulations with an outward perky cheerfulness while Andre, seemingly unaware of the effect of his words, notes Jeanne's resemblance to Lizbeth. Is Andre oblivious or is he using his wife as a patron of the arts?

Chabrol and Caroline Eliacheff have adapted a Charlotte Armstrong novel by ladling on the symbolism. While Mika may be a murderer, Jeanne's mother is forensics chemist, which links back to the more commercial profession of Mika's father. In one conversation, Mika's business associate Dufreigne (Michel Robin) chides her for dropping sponsorship of children's charities while discussing how to get milk to the factory. Jeanne keeps fussing about milk for her tea - a quest to discover mother? If all this weren't enough, the musical piece Polonski mentors Jeanne on is 'Funerailles.'.

"Merci Pour Le Chocolat" is a poisonous play of parentage with a barren schemer pulling its strings.

Talented teenaged pianist Jeanne Pollet (Anna Mouglalis) learns from her mother that, for a short time on the day she was born, she was switched with another baby, the son of virtuoso concert performer Andre Polonski (Jacques Dutronc). Since her budding ability at the keyboard parallels that of the brilliant pianist, Jeanne toys with the idea that she may actually be the man's daughter. She finagles her way into the Polonski household where Andre's first, and now third, wife, the wealthy chocolate heiress Mika (Isabelle Huppert) runs her home with an iron hand in Claude Chabrol' "Merci Pour le Chocolat."

Chabrol, called France's Alfred Hitchcock, is a craftsman at creating a suspenseful drama that twists and turns with its intrigue while leavening darkly hued humor throughout. With "Merci" he begins with the second wedding for Mika and Andre, some years after his middle wife, Lisbeth, died in a tragic car accident, leaving Andre to ineffectively raise his untalented son Guillaume (Rodolphe Pauly). When Jeanne arrives on the scene, she notices that Mika has an unnatural concern for her stepson, including the ritual making of the family's nightcap - hot chocolate.

The deftness which Chabrol exhibits his story (he also co wrote the screenplay with Caroline Eliacheff) is masterly as he develops the characters who populate his web - actually, the spider symbolism for the manipulative Mika is so wonderfully heavy handed that you can't help but appreciate its "hit you in the head and poke you in the eye with a sharp stick to get your attention" tricks. The ongoing use of a Liszt funeral elegy gives a cheerful somberness to the film that has a playful feel about it. Chabrol capitalizes on his superb cast, first class story and fine technical craftsmanship to create a high class, subtle thriller.

Isabelle Huppert is a standout as the smart, sophisticated matriarch who unhesitatingly casts her web to ensnare anyone who threatens to upset the balance she has worked to maintain in her life. The actress portrays a lady possessing cool elegance and a sinister streak that brooks no intrusion from outsiders. Anna Mouglalis, as Jeanne, innocently breaks in to the Polonski family and, because of her obvious musical talent, attracts the attention of Andre. Mika does not take this intrusion lightly. Rodolphe Pauly gives sullen life to the son who has never met his father's expectations.

The twists and turns of "Merci Pour le Chocolat" are a delight to watch. It is a film that took me a long time to catch up with but proves to be one that I'm glad to have made the effort to see. (Although I prefer the more intriguing English title "Nightcap" to the film's French moniker.)