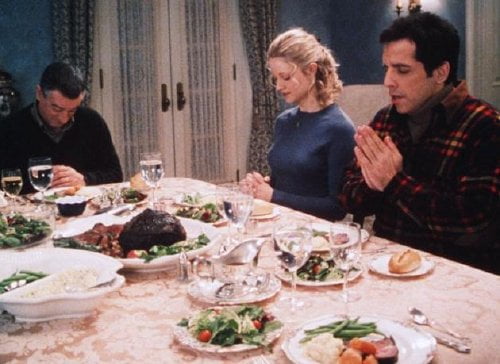 When Chicago nurse Greg Focker (Ben Stiller) tries to propose 'cute' to his schoolteacher girlfriend Pam (Teri Polo, TV's "Felicity"), she's interrupted by cell phone news that her younger sister is getting married. As Pam discusses her sister's doctor fiance's courtly ways, including his having asked her father for her hand in marriage, Greg realizes he'd better follow suit and packs the ring away for a trip to "Meet the Parents."

Written by Jim Herzfeld ("Tapeheads") and John Hamburg ("Safe Men"), "Meet the Parents" is every prospective son-in-law's nightmare. Greg's luggage is lost (along with the ring), forcing him to accept clothers from his girlfriend's father. His gift of a rare flower bulb to is met with apathy and he later learns Jack Byrnes (Robert DeNiro) isn't a horticulturist, but an ex CIA profiler. Pam lets slip that Greg hates cat while Jack dotes on an arrogant Himalayan called Mr. Jinx. A gift of champagne is uncorked to shatter the urn holding Jack's mother's ashes. Greg's told to 'keep his snake in a cage for 72 hours' and is enconsed in the den and told not to flush the toilet. To top things off, he inadvertently finds Jack's hidden office, complete with polygrapher equipment and Jack arrives in time to 'treat' him to a demonstration. Twenty-fours have yet to pass and things will get far worse.

Ben Stiller and Robert DeNiro are an inspired pairing. Stiller can be sexily romantic, painfully clueless, physically brilliant and hilariously enraged. He almost manages to rise above the fact that the script paints Greg Focker as an obsequious schmuck, a character who is only likeable at the beginning and end of the film. DeNiro spends most of the film as the personification of disdain and paranoia when he isn't loonily swooning over Mr. Jinx or obsessively little-girling his eldest daughter. He, too, is unlikeable until the film's denouement allows him to warm up a little (and set us up for a sequel that appears to prove that warmth false).

Additionally, the script strains occasionally, as when it would have us believe a well-to-do family would allow their septic system to get perilously close to full days before a backyard wedding. More often than not, however, the laughs are honestly come by. The two most brilliant setpieces concern Greg's attempt to rescue Mr. Jinx from the roof while sneaking a frowned upon smoke and a pre-wedding barbeque and the best man (and former fiance of Pam) Kevin's (Owen Wilson, "Shanghai Noon") house.

Suppport is hit and miss. Blythe Danner ("The Prince of Tides") is endearingly ditzy as Dina Byrnes, all huge blue eyes and blonde halo of hair. She's the type of mom who serves food with baby names (hors d'ouvres are 'pu-pus'). Brother Denny Byrnes, (Jon Abrahams, "Scary Movie") however, seems like an ill-advised homage to the demented brother in "Annie Hall." Newcomer Nicole DeHuff resembles Parker Posey lite as bride to be Debbie while her fiance Bob Banks (Thomas McCarthy, "30 Days") is a loud jock. His dad Larry (James Rebhorn, "The Talented Mr. Ripley") is amusingly played as an almost Greek chorus to Jack. Owen Wilson is dead-on great as the so-perfect-he'd-be-obnoxious-if-he-weren't-so-damn-saintly Kevin, a filthy rich Wall Street investor who creates elaborate carvings because Jesus was a good role model as a carpenter. ("Greg's Jewish," Pam advises him. "Great! So was JC!" Kevin enthuses.)

"Meet the Parents" had all the pieces in place to be a comic masterpiece. While it doesn't quite live up to its potential, it's still a heck of a lot funnier than what usually passes for comedy in these days.

Greg Focker (Ben Stiller) is madly in love with Pam Byrnes (Teri Polo). He has made elaborate plans to propose marriage, even bringing Pam's grade school class in to help him pull it off. But when her sister Debbie (Nicole DeHuff) announces her own imminent wedding, Greg's plans are dashed and he has to prepare himself to meet his potential in-laws, one of life's most nerve-wracking events, in "Meet the Parents."

The screenplay by Jim Herzfeld and John Hamburg is based on the 1992 short film by Greg Glienna and Mary Ruth Clarke and examines, in slapstick fashion by director Jay Roach, the terror of working hard to impress your future in-laws and failing miserably at every turn. Greg is a competent male nurse working in Chicago. He really, really loves Pam and marriage is the number one thing on his mind. But all this has to be put on the back burner when Pam's younger sister overrides him with her plan to marry Dr. Bob Banks (Tom McCarthy). Greg and Pam have to drop everything and head to Long Island for the wedding. Along the way, the airline loses Greg's luggage - which also happens to contain the 2-carat diamond engagement ring.

That's the least of Greg's worries when he meets his father-in-law to be Jack Byrnes, a retired "rare plant expert." Greg tries to get into Jack's good graces by bringing, as a gift, a rare Jerusalem tulip but the so-called expert doesn't have a clue what the plant is. Jack, Greg comes to find out, is really a retired psychological ops expert for the CIA. Jack is a man who can tell whether you tell the truth or lie, putting Greg in the unenviable position of having to prove his worthiness to be admitted into the Byrnes family and into Jack's own, personal "circle of trust."

Greg finds himself in a lose-lose situation from the start. Pam inadvertently tells her dad that Greg hates cats, forcing Greg to protest her claim a bit too much since Jack is almost obsessive over his feline companion, Jinx. When Greg accompanies Jack to the store he makes more trouble for himself when he tells the older, conservative man that the song on the radio, "Puff the Magic Dragon," is about smoking marijuana. Jack immediately tags Greg as a deranged pothead (this is reinforced later) who is out to corrupt his precious daughter.

The film delves deeper into the realm of slapstick comedy as Greg struggles to constantly try to make a good impression and screws it up every time. When Greg uncorks a bottle of champagne to celebrate the pending marriage, the urn holding Jack's beloved mother's ashes becomes the target of the flying cork. He flushes the toilet after being told not to because of a dicey septic system, causing the outdoor wedding site to become a quagmire of bodily refuse. A splendid Buster Keatonesque sequence takes place, and is the crown of the film's comedy, when Greg accidentally lets Jinx out and struggles, to disastrous results, to try and catch the scared kitty. The near-nastiness of Greg's last name is target for frequent fun poking, especially when Dina realizes that her daughter will soon be saddled with the moniker Pamela Martha Focker.

"Meet the Parents" is an uneven effort that captures the humor and grace of the slapstick antics of the masters of the genre, like, Keaton, Chaplin and Harold Lloyd, but with two main characters - Greg and Jack - who are not all that likable. Greg is a schmuck who just wants to be accepted by his girlfriend's family. You feel bad, while laughing at his plights, but Stiller doesn't evoke any real sympathy in the role, though his physical humor and deadpan expressions are a riot when he is given free rein. DeNiro puts a hard, channeled sternness on his performance that is not all that different from his gang boss role in "Analyze This." Except for his devotion to his family, there isn't anything about Jack that says "nice guy." The rivalry between the two men, who are really vying for the affection of Pam, is too abruptly reversed as things are all tied up neatly by the end.

Where the film attains a degree of likablility is with the main supporting cast. Teri Polo, as Pam, has the unenviable position of being the love interest in what is, at its core, a slapstick comedy. Polo gives dimension to Pam that shows her as a strong, independent young woman who, when she visits home, is still daddy's little girl and believes that he can do no wrong in her eyes. She is conflicted as misleading information is bandied about on Greg. She takes her own resourceful actions to prove to her father, in the end, that Greg is good, honest and loving man. She's a very good role model and the perf is a solid calling card for Polo. Blythe Danner, normally a dramatic actress, is wonderful as the ditzy, trusting future mom-in-law, Dina, whose role is to keep things on an even keel in the family, tempering the behavior of the sometimes excitable Jack. Danner's performance, according to the actress, was inspired by Gracie Allen, and the veteran thesp puts a sweet Southern charm into her character, too. Owen Wilson, as Pam's former fiance and still family friend Kevin, puts a subtle spin on his role as he still harbors feelings for her, has incredible wealth and equally incredible skills, further dampening Greg's self esteem. The rest of the cast, including vet character actor James Rebhorn, is little more than background scenery.

Production values are first rate with dead on attention to the details, like the Byrnes's conservative, colonial home in the exclusive Oyster Bay area of Long Island. Costuming, by Daniel Orlandi, is subtle and fitting, especially DeNiro's town and country gentleman's attire. Stiller, though, is outfitted brilliantly as he is forced, due to his missing luggage, to wear, first, Jack's pajamas ("But, they're new!" Jack exclaims to Dina), then Pam's brother Denny's hip-hop, baggy pants outfits that make him look like an overgrown kid. Photography by Peter James is equal to the rest of the techs in the film.

There are some things about "Meet the Parents" that make it good comedy, but not great comedy. That neither of the leads is really likable is a problem only somewhat made up for by other qualities like supporting cast and sometimes laugh out loud comedy. Still, it's an entertaining little outing but not something that will stay with me.