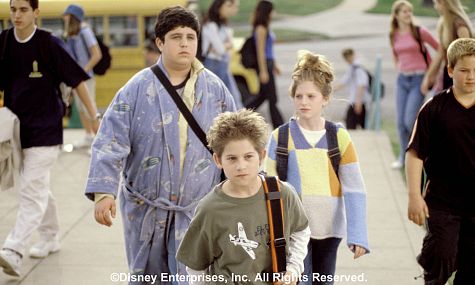 Max Keeble (Alex D. Linz) is about to enter the 7th grade. For most kids this adventure is greeted with both anticipation and fear of the unknown. Max, on his first day, has not one but two bullies to contend with, a principal who has it, irrationally, in for him and the evil ice cream guy who is out to get him, too. Then, mom and dad drop the big bomb – they are moving to Chicago is a week. Max sees this as an opportunity to get back at those who taunt him, but he soon finds out it’s unwise to burn his bridges behind him in “Max Keeble’s Big Move.”

Reminiscent of another kids’ flick from earlier this year, the animation “Recess: School’s Out,” “Max Keble’s Big Move” pits the innocent, very bright Max against a variety of enemies that represent such things as abuse of authority by uncaring adults and pitiless harassment by schoolyard bullies. When Max learns that his milquetoast father (Robert Carradine) has been pressured to move to Chicago by a bullying boss, he decides to take the week he has left at his school to get even with those who have tormented him from the start.

One bully, thug Troy McGinty (Noel Fisher), picks a new kid to come down on every year and this year it is Max, who is forced to succumb to filthy, smelly abuse that ends him in a dumpster filled with garbage. Another tormenter, Dobbs (Orlando Brown), fleeces Max and other kids out of their lunch money, promising to “invest” it for them – whether they like it or not. Most onerous, though, is principal Jindraike (Larry Miller), a selfish, uncaring suck-up who puts any academic or physical teaching for the students aside as he reallocates school funds to build a stadium that he hopes will get him his coveted superintendent of schools position. He makes enemies, immediately, with Max when the boy learns that the unscrupulous bureaucrat is going to destroy the local charity pet shelter to build his dream.

Max’s world is turned upside down when his dad drops the news that they have to move a thousand miles away. Angry over the sudden, unexpected changes, Max lectures his father about standing up for himself. The boy takes his own advice and, figuring he has nothing to lose, begins a campaign against Jindraike, McGinty, Dobbs and the Evil Ice Cream Man (Jamie Kennedy), a dishonest ice cream vendor who hates children and bilks them without a thought or a care. Max also has to contend with his feelings for his friends Megan (Zena Grey) and Robe (Josh Peck), whose trademark is to wear his blue bathrobe all the time. They have been together through thick and thin, but now things are changing. Throw hormones into this mixture as Max becomes attracted to sexy 9th grader Jenna (Brooke Anne Smith), a budding babe who draws his attention away from his loyalty to his friends. Megan, he learns, has been harboring a secret crush on Max to boot.

Max’s grand scheme of revenge is flipped over when his dad tells him that he has taken his son’s sage advice, quit his job under his dictatorial boss and announces plans to start his own business. Shocked, Max realizes that, now, he has to stop the wheels of his revenge scheme, but it may be too late. Revenge may be sweet, but there is a message about being responsible for your actions deeply imbedded in the story of “Max Keeble’s Big Move.” As the school’s janitor (Greg Lewis) so wisely puts it to Max, “ Any kid can make a mess. It takes a man to clean it up.” Vengeance, as Max learns in the end, “makes us the same as them,” and he strives to simply make the school a better place. This and things like the importance of friendship, loyalty and honesty are ladled on in an amusing way that should sink in pretty painlessly for kids (and, maybe, their parents, too).

Alex D. Linz has a precocious charm as the amiable Max Keeble. He is comfortable with the camera and has a force of personality necessary to pull off a lead role effectively. Larry Miller does such a great job as a sniveling, overbearing lout he is able to give dimension to his bad guy persona as the cartoonish Principal Jindraike. The conniving, so-called “educator” is interested only in his own advancement and desires, using his important position for his own good and not that of his wards, the children. Of course, he and the other bullies get their comeuppance at the hands of Max and the rest and you wouldn’t expect anything less. The rest of the cast of kids and adults fill out their roles in good order.

It amazes me that the best films of the year, at least the ones that appeal to me, have been kids’ flicks and foreign film. “Max Keeble’s Big Move” is a solid entry in the pantheon of movies-with-a-message that both entertains and teaches.