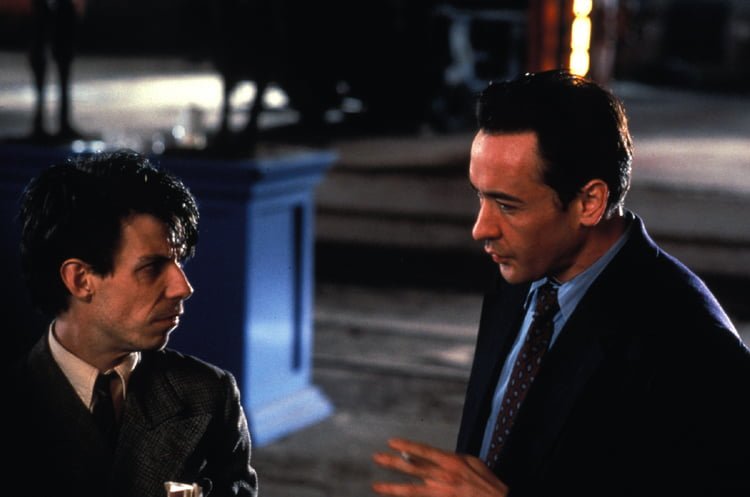 Max Rothman (John Cusack) is a one-armed, German-Jewish war veteran trying to rebuild his art dealership following the devastation of the Great War. Times are tough for the ex-soldier but they are far tougher for another man, a former corporal who is attempting to break into the art world. Max takes a liking to the artistic wannabe after learning they both served on the same front during the infamous Third Battle of Ypres. Rothman encourages the artist to paint and create, but the man, Adolph Hitler (Noah Taylor), soon learns that politics and power are the age's new art in "Max."

Max Rothman (John Cusack, "High Fidelity") is a progressive art dealer in 1918 Munich when he meets a Corporal whom he fought with in Ypres who aspires to be an artist. Screenwriter Menno Meyjes ("The Siege") makes his directorial debut conjecturing what might have happened if the artist in Adolph Hitler (Noah Taylor, "Shine") had been cultivated by a Jew named "Max."

One has to admire Meyjes' idea and producer/star Cusack's commitment to this unusual project which never quite takes off mostly due to its inability to convince that Max would continue to befriend Hitler. While Meyjes' script does a well balanced job of exploring ideas about art, politics and anti-Semitism, it is unfortunate he included lines like 'Hitler, come on, I'll buy you a lemonade.' Cusack, one of America's most undervalued actors, is utterly convincing as the one-armed gallery owner, but Taylor's Hitler is ironically too avant-garde an interpretation.

Max epitomizes Nietzsche's argument, which Max quotes to Hitler, that anti-Semitism is the ideal of those who feel cheated. Max is well off, runs in sophisticated circles with his beautiful Jewish dancer wife Nina (Molly Parker, "The Center of the World") and also keeps an Aryan artist mistress Liselore (Leelee Sobieski, "Joy Ride") while Hitler is poor and friendless. Where Max translates his inability to be a painter (he lost an arm in WWI) into his current career, Hitler cannot pour out his rage at the injustice of the Versailles Pact onto a canvas and so begins ranting at beer halls and political gatherings. Hitler is as out of his element in the explosion of modern art, hanging onto his traditional conservative style, as he is in society. (When viewing the work of Dadaist George Grosz (Kevin McKidd, "Topsy-Turvy") in Max's gallery, Hitler observes 'This is Bolshy, huh?') Meyjes' finally makes Rothman's interest in Hitler's art believable in the last act, when he pulls out Adolph's sweeping Teutonic architectural designs. Max views them as the madcap futuristic kitsch of a barking mad genius, but the very ideas Hitler has begun propagandizing take shape to deny his coveted entrance into the art world.

Cusack is well supported by Molly Parker, who brings a modern sensibility to her wife and mother. A scene between the two, where Nina gently but firmly makes Max choose her or his mistress while she practices at the barre, is one of the film's most memorable. Sobieski, however, is out of her depth as the bohemian performance artist who makes fires in the middle of her apartment. She's not strong enough to convince as a potential threat to Max's marriage. Taylor is fine shouting and spitting his speeches, but he never convinces as an artist. The shaggy hairstyle he sports is more successful bleeding the historical Hitler out of his character than evoking an artistic sensibility. Taylor is given terrific support from Ulrich Thomsen ("Celebration") as Captain Mayr, the man who encourages his political side and Max's opposition, another of Meyjes' studies in contrast.

Ben Van Os's ("The Cook, The Thief, His Wife and Her Lover") production design and Lajos Koltai's ("Malenda") crisp photography capture the modern world of 1918 Munich on location in Budapest. Particularly noteworthy is their work on the film's last scene, in which a city street and interior courtyard are visually joined while projecting opposing worlds.

Writer/director Menno Meyjes creates a fanciful "what if" world with his original screenplay. He explores the idea of what if Max Rothman did exist and befriended the friendless loner at a time when history could have been changed by that simple gesture of kindness. Max, relatively well-off in a country reeling under the harsh blows of the dictates of the Treaty of Versailles, has a home, his family and a business that keeps him well stocked in food, wine and, especially, cigarettes. He meets a raggedly dressed ex-soldier carrying his portfolio and offers him the hospitality of his gallery. The kindness is remembered and a bond forms between Max and Adolph Hitler.

Max is trying to keep his business going and takes the angst of the recent war and encourages his contributors to bare their souls in their art. He affords this advice to Hitler and pushes the potentially talented artist to find his level. At the same time, though, Captain Mayr (Ulrich Thomsen), Adolph's former commander, recruits his ex-corporal to use his oratory skills to aid the budding National Socialist Workers Party in its war against the Red invasion and, more importantly, the Jews. What transpires is dripping with irony as fate takes a hand at a crucial moment in history, changing the world forever.

There is nothing unexpected except for the initial "what if" concept of the unlikely friendship between a Jew and the man that would become the most ardent anti-Semite and murderer the world has ever known. Max is trying to rebuild his shattered life and body and has serious self-esteem problems. He declares at one time that he is "half man, half doll, every woman's dream" in his frustration over his wartime injury. But, he is aware of others suffering the same fate and does what he can for his fellow man, personified in Hitler. He is also married to Nina (Molly Parker) while having a torrid affair with his protégé Liselore (LeeLee Sobieski). Max, despite his infirmity, leads a full and lusty life.

Adolph Hitler, on the other hand, has suffered the perdition of war and, while having all of his limbs intact, is psychologically scarred by its horror and propaganda. The victors of World War One, using the Versailles Treaty like a club, have ravaged Germany and the Communists are on the verge of wresting political power away from the struggling Weimar government. The returning homeless and unemployed soldiers see the Reds as the cause of the economic and social collapse in their fatherland. For the Nazis it is a small leap to go from blaming the Reds to blaming the Jews for all of Germany's woes. Hitler gets caught up in the turmoil of the time and makes speeches besmirching the Jew and demanding blood purity (a two edged sword for the Nazis), all the while having conflicted doubts because of his relationship with Max.

Meyjes screenplay is a one-note affair once the players are defined and described. Max understands the heart and soul of an artist and reaches out to Adolph. He helps the struggling artist with moral and monetary support and the chance to show his art to the public. Adolph struggles with his newly formed concept of Art + Politics = Power (Meyjes actually show Hitler write this down as if he might forget the highly -complex equation) as he answers the call to take a hand in his country's fate. "Max" poses the question: Will Hitler accept his friend's help or give in to the mystique of the power to manipulate the people? You know the answer to the question so "Max" becomes an exercise in wondering what Meyjes has in mind for this very odd couple.

Techs are routine without much to remark. The set design does little to evoke the time and place of 1920 Germany. Costume covers the appropriate time and the grunginess of the homeless soldier but feels artificial. Lensing, by Lajos Koltai, is routine

Acting is without note. John Cusack is sullen and introspective as Max, with his ever-present smoldering cigarette. And never gets beyond the two-dimensional. Noah Taylor gives an earnest performance as Adolph Hitler but his, too, lacks dimension. Molly Parker has some spark as Max's strong-willed wife while Leelee Sobieski is thoroughly out of place as the adulterous femme fatale protégé.

"Max" is an interesting idea but one that is woodenly executed.