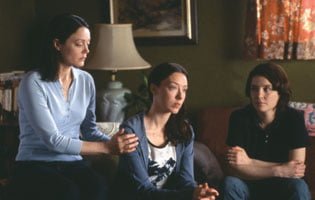 This family drama adapted from his play by Canadian writer/actor Daniel MacIvor ("The Five Senses") plays like a Chekovian take on "Aberdeen," another small independent film where a daughter must forgive the sins of a father while her mother lays in her deathbed. Although the obvious soap opera revelations and loose story strands display the same overbaked quality that marred MacIvor's "The Five Senses (which shows up on TV here in a bit of self promotion)," the first rate acting and former editor von Carolsfeld's (and cinematographer Stefan Ivanov "Genealogie d'un Crime") eye for framing, particularly in close-ups, make "Marion Bridge" a place worth stopping.

"Mother, you could blend a bit," critiques Agnes noting Rose's (Marguerite McNeil) blush application as she cups her mother's face in her hands. Agnes is otherwise non-judgemental, having brought her mother flasks of whiskey from Toronto to ease her last days. While she resists mom's urging to join her (she does keep up in the chain-smoking department), Agnes does begin to stumble off the wagon after observing a teenager, Joanie (Ellen Page), who works at a nearby gift store.

Agnes does impress Theresa by following through on caring for their mother in the old family homestead, then surprises her by accompanying her devout older sister to church. The big city girl tries to shake Louise out of her doldrums by inviting a woman to dinner that Agnes has deduced Louise is attracted to, but the small town girl hasn't recognized her own lesbianism and the attempt falls flat (and the story line is promptly dropped). Revelations draw the three sisters together while denied cathartic parental confrontations are replaced by forgiveness and acceptance.

Von Carolsfeld frames her actresses beautifully, off center complemented by flowers, reflected in windows. In one scene, we see the backs of Theresa and Agnes sitting enjoying a smoke as they face the blank white side of their home, a lovely metaphor for secrets held within. Parker gives rich characterization to Agnes, centering the film, but Jenkins is also very strong, gradually lifting the disillusionment which clouds her face. McNeil, bedridden throughout the film, paints an imperfect mother who remains sympathetic, aided by Parker's reactions to her and MacIvor's colorfully humorous dialogue. Ivanov's crisp photography brings color to the gray coastal location, tempered by the spare score of composer Lesley Barber ("Mansfield Park").