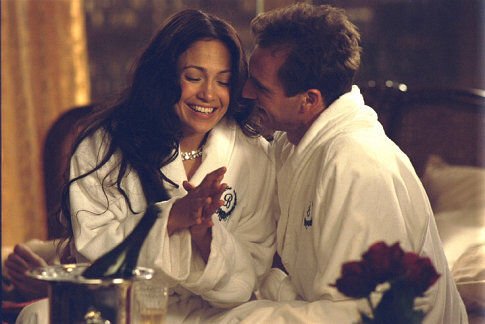 There is absolutely nothing original or unexpected about Kevin Wade's Cinderella screenplay, but nonetheless director Wayne Wang ("The Joy Luck Club") and his stellar cast deliver a frothy confection full of charm. While the film bogs down tying its loose ends together reuniting lovers who never should have parted, "Maid in Manhattan" is nonetheless a solid romantic comedy that seems just right for the holiday season.

Marissa is a single mom who raises her politically curious ten year old Ty (Tyler Garcia Posey) in the Bronx. Inured to a life of blue collar work by her mother, Marissa is shocked to discover her friend Stephanie has put in an application for management training for her and that her boss Miss Burns (Francis Conroy, HBO's "Six Feet Under") has fast-tracked her. The attentions of Mr. Marshall have come at a precarious time.

As Marshall fights off the attentions of Lane, who he inadvertently has invited to lunch, Marissa's coworkers conspire to make her the belle of a fund raising ball, where Marissa intends to tell Christopher the truth and end the romantic flirtation.

Wade's screenplay may be obvious, but he imbues it with upstairs/downstairs themes ('Strive to be invisible' says a sign in the maids' locker area) and milks comedy from unlikely places (Ty's a Nixon expert, a pair of middle-aged French women pilfer from an unattended maid cart). Production designer Jane Musky contrasts the hotel's subterranean spaces with the airy guest suites up above (the Waldorf-Astoria stands in for the Beresford) and uses NYC locations to glamorous effect.

Jennifer Lopez is believable and appealing as a hard working mom who can pass for a socialite in the right outfit. The surprise, though, is Fiennes in his first outing as a romantic lead. He's surprisingly sweet and light on his feet. The leads alone, however, are not what make "Maid in Manhattan" successful. Fiennes is supported by Stanley Tucci ("Big Night"), his manic campaign manager frustrated by Marshall's political naivety while Lopez is supported by an army of hotel workers, beginning with the infectiously comical Matrone. Bob Hoskins adds dignity and warmth as butler Lionel. Lisa Roberts Gillan and Maddie Corman form a Greek chorus in aprons. Di Quon is a cheerfully disheveled seamstress and Lou Ferguson is a paternal security officer. Richardson plays Lane in broad parody, as does Amy Sedaris as her obnoxious friend Rachel Hoffberg. Young Posey is likeable and cute without being cloying.

"Maid in Manhattan" is a charmer, a PC "Pretty Woman" that ditches the odious prostitution theme for class commentary.