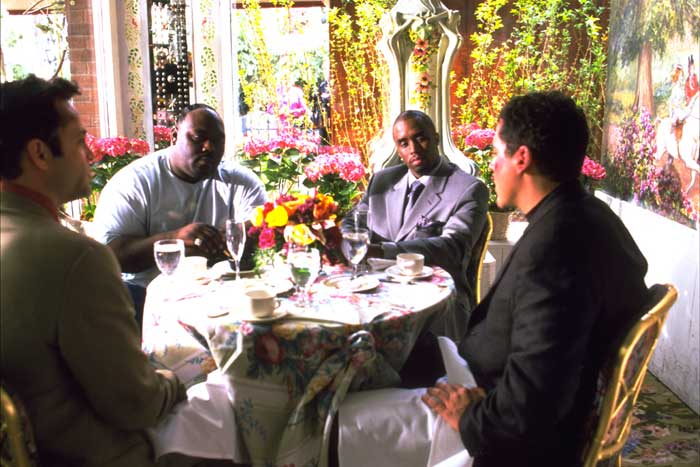 Bobby (Jon Favreau) is a small-time hood who wants to become a champion boxer, but, with a 5-5-1 record, he is going nowhere fast. His girlfriend, Jessica (Famke Janssen), is a lap dancer, a fact he has a hard time with, especially when he escorts her to client bachelor parties. His boss, Max (Peter Falk), likes Bobby and wants to help the troubled pug, so he sends him across country to make an important drop. With his best friend, the very problematic Ricky (Vince Vaughn), in tow, Bobby heads for big trouble in the Big Apple in "Made."

Bobby (Jon Favreau, "Swingers") is an aspiring boxer who's intensely loyal to his boyhood screwup buddy Ricky (Vince Vaughn, "Swingers"), his stripper girlfriend Jess (Famke Janssen, "Rounders") and her young daughter Chloe (Makenzie Vega, "The Family Man").  Bobby works as Jess's driver, but hates having to watch her work.  When a guy gets too grabby at a private party, Bobby boils over and a brawl ensues.  He's called in by Max (Peter Falk), the local mob boss both he and Jess work for, and is given one last chance. Against his better judgement (and a grudge for stolen carpet cleaning van), Max allows Bobby to talk him into letting him partner with Ricky, but only if he'll vouch for him, in writer/director Jon Favreau's "Made."

Favreau brings together elements of his "Swingers" success and a good dose of the cast of "The Sopranos" for his feature directorial debut, "Made." While the sharp dialogue that made his "Swingers" script such a success can be found in Bobby and Ricky's banter, the writer/director's story stumbles for lack of character background.

"Made" is" a comedic buddy road movie where two disparate green guys are sent to the Big Apple as hired thugs to play in the big leagues of what they believe to be a major drug drop.  While Bobby is level-headed and responsible, Ricky is an impulsive, none too bright, self-serving blow hard who can only be counted on to screw up any situation in as spectacular a manner as possible.

The first recipient of their Mutt and Jeff routine is their flight attendant, who finally puts Ricky in his place when he attempts to have her round up women for their first class convenience.  Driver Jimmy (Vincent Pastore, Big Pussy in "The Sopranos") amazedly keeps darting his eyes in the rear view as Ricky plays with opening and closing the barrier between limo driver and passengers.  Jimmy acts big with their bell boy (Sam Rockwell, "Box of Moonlight"), flashing money for a room upgrade.  He begins squandering their per diem by ordering room service - from Bobby's room, of course.

They're brought to meet Max' client Ruiz (Sean 'Puffy' Combs), whom Ricky immediately riles.  Given a second chance, Ruiz' right hand man Horrace (Faizon Love, "The Replacements") tries to help the duo out, but is horrified when Ricky uses the inside info he's given him on their drop 'the Welshman' (David O'Hara, "Braveheart"), making fools of them all.  Eventually, they do all make their way to the final meet in Brooklyn with surprising results, only to be met with even more surprising results on their return home to Jersey.

Favreau and Vaughn reprise their "Swingers" personas and their banter is always entertaining.  However, Ricky's character is such a total jerk and so completely unreliable that it's nonsensical that Bobby would ever vouch for the guy.  Favreau the writer never provides anything that would explain why Bobby would be so beholden to Ricky, an essential flaw of his story, unless he means to portray Bobby as a complete patsy.  This last supposition isn't implausible, given how Bobby's other relationships are resolved and while the final scene provides a funny wrapup, the film itself becomes instantly forgettable.

Favreau's blessed with a supporting cast who can't be faulted for his story flaws.  Sean Combs is surprisingly natural as Ruiz, smooth and intimidating, but not too intimidating.  Faizon Love is likeable as Horrace and Pastore has reassuring presence as Jimmy.  Janssen is as good as she can be with her underwritten character.  Makenzie Vega is a child actress to watch.  Falk is stern and little else.  The film also features Federico Castelluccio (Furio in "The Sopranos") as a bouncer and Drea de Matteo (Adriana in "The Sopranos") as a party girl.  Jennifer Esposito ("Summer of Sam") is the girl who changes her mind about Ricky.

Favreau employed no less a cinematographer than Christopher Doyle whose stylish work in Wong Kar Wei's "In the Mood for Love" is replaced by meat and potatoes treatment here.

Bobby and Ricky's squabbling routine is funny stuff.  Too bad Favreau's "Made" never gives them a reason for being together.

"Made" tries to be a number of different things and, unfortunately, doesn't do any of them well. Bobby wants to be a champ, seems dedicated, and gives up. He wants to have a normal relationship with stripper girlfriend Jessica (Famke Janssen), but that falls apart. He wants out from his mob
connections but continues to do Max's bidding out of loyalty. He knows his best friend is an obnoxious, troublemaking bore, but persists in putting up with every stupid thing Ricky does. There are also mob dealings, gangland ambushes, an ambiguous shady deal, a Scotsman called "The Welshman" (David O'Hare) and an unsung hero, limo-driver Jimmy (Vincent Pastore). There is plenty going on, but none of it has focus.

There is an amusing chemistry between Favreau and Vaughn as best friend characters, but, a few minutes into "Made" I'm asking myself "why in heaven would Bobby ever put up with the obnoxious Ricky?" When Bobby gets his friend a job as a driver for connected Max, Ricky sells the truck and pockets the money. When they go on the "job" to New York City, Ricky does
everything he can to prove he is a jerk - over-bearing, he'll hit the flight attendant call button with the most inane requests just because he can, regardless of how annoying he is. When Max gives strict orders to stay sober and keep a low profile, Ricky gets hammered and lets everyone know
he's there. And Bobby just puts up with it. The relationship never makes sense and Favreau doesn't try to explain the why of it except to say that they were boyhood friends. Vaughn's is a reprise of the same character he played in "Swingers," but even more insufferable.

While the camera centers on the antics of Ricky and Bobby, there are a couple of perfs worth mentioning. Sean "Puffy" Combs gives a good badass tough guy persona to New York-based Ruiz, an "associate" of Max. It's always a pleasure to watch Peter Falk even if his Max character only gets a few minutes screen time. Friends of Favreau make up much of the cast with cameos and small roles abounding with the director's buddies.

Favreau is trying for a gritty look and feel and uses hand-held cameras to an annoying degree. Too many tangents hurts the flow of the film and Vince Vaughn, while sickly funny, gets to be too much to take. "Made" doesn't make it.